It’s been a while since I last dined at Hinoki. The previous time I mentioned that I would return to try their Sushi Gozen ($32.00++), so of course, that was what I ordered this time!

The restaurant was more crowded than it was a few months ago. 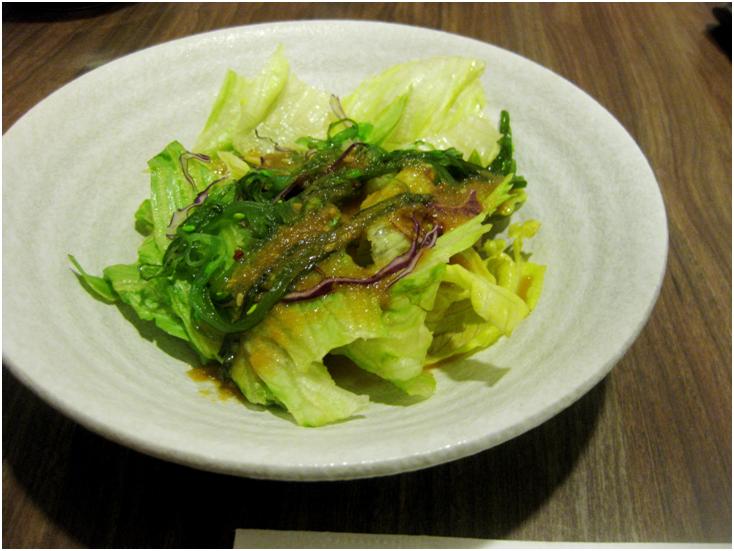 The salad served was like how it was the previous time. Nothing much has changed here.

The rest of the set was served together.

The chawamushi was very flavourful and I like the starchy liquid layer on top. The custard was perfectly done without a single air bubble. It was as flawlessly smooth as soya bean curd.

The miso soup however, wasn’t the same as it was before. Previously the miso soup was one of the better ones I’ve had, with mushrooms in it. This time, it was very ordinary.

There were 8 pieces of nigiri sushi, 1 piece of tamago, and 4 pieces of maki sushi.

I requested for mine to be seared, as I prefer aburi fish to raw fish.

The maki sushi was covered with a mixture of Japanese mayonnaise and mentaiko. As the taste of the mentaiko and mayo was overwhelming, I couldn’t make out what was in the centre of the maki. As I’m not a big fan of mayonnaise, this had got to be my least favourite among this platter, even though I didn’t dislike it.

The tamago was sweet and delightful. I am a fan of tamago and I’ve had bad ones but this was alright, though not outstanding.

The ikura (salmon roe) was fresh and it was salty (as it was supposed to be) when it exploded in my mouth.

The piece of fish on the nigiri sushi was considerably big at Hinoki. They all were very fresh.

Among these, my favourite has got to be the salmon.

I kind of wish I had requested for my swordfish to be raw, as swordfish is better raw. However I found out that by default they would serve the swordfish one seared too.

The scallop was fresh and chewy. I think aburi for scallop is better than raw.

The prawn was fresh as wall, and wasn’t soggy like most versions of it I’ve tried. However, I wish I had this raw too, to taste the sweetness accurately.

The unagi was very tasty and wasn’t slimey. This was really good, but it wasn’t as good as Aoki’s, which was unforgettable.

Overall, I would recommend the salmon and scallop to be seared, swordfish and prawn to be raw, and the tuna and yellowtail is fine in either way.

I also realised that their sushi wasn’t as well pressed as those from Tomi Sushi, Aoki or Tatsuya. It didn’t stick together well, didn’t seem like the correct sort of rice, and wasn’t as well flavoured. However, on the whole the sushi was still a lot better than others I’ve had!

For more about Hinoki and their menu, please view my previous entry.

One thought on “Hinoki II – Dinner”