This has to be the luckiest random find in the entire trip. It was a really warm but rainy day and under the sweltering heat all I could think of was ice cream. I spotted Capogiro Gelato shop right opposite where I had planned to have lunch in Philadephia and made a mental note to save space for that after eating.

I had no inkling that I was going to be having the best ice cream in the world. 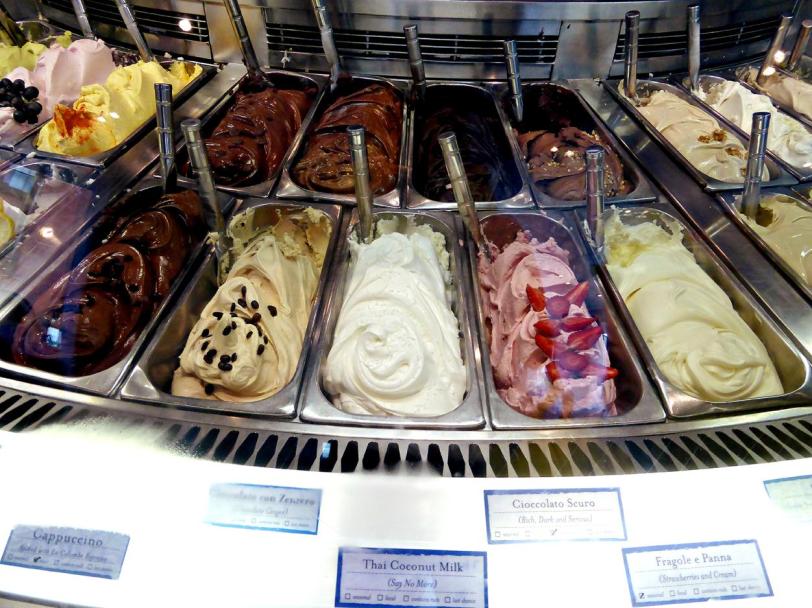 They have many flavours but what I was most attracted to was the Thai Coconut Milk. I love coconut (only ever since getting started in yoga actually. Prior to that I actually disliked coconut.. like how is that even possible!?!) and was thrilled to see this flavour. Even before tasting I knew I was going to get this. And for real it was SO good! I tasted a few other to select as my second flavour but none was as good as Thai Coconut Milk. In a way, the Thai Coconut Milk was too spoil market that nothing else came close even though everything I tried was really good too. 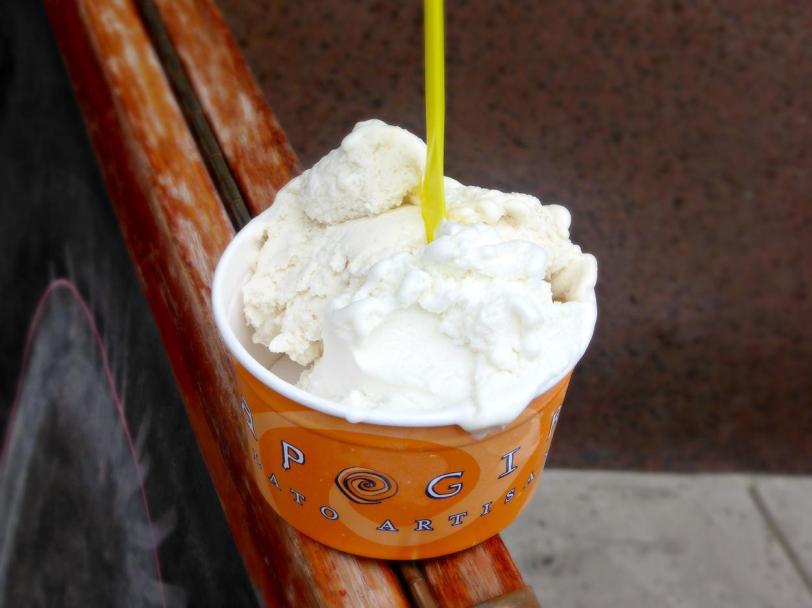 After trying like 10 flavours or something I ended up with just plain old vanilla because I couldn’t decide what else would be as good as Thai Coconut Milk and normally vanilla is my other favourite. (Madagascar Bourbon Vanilla to be exact, not really just plain old.) After enjoying a few mouths of this, I regretted not getting it entirely Thai Coconut Milk. The Thai Coconut Milk gelato was really out of this world delicious! For the rest of my trip in Barcelona and France (and a small town in Italty even) I tried really hard looking for coconut ice cream, trying it at many ice cream or gelato shops but nothing was anywhere similar. I think the difference is that they use Thai Coconut Milk as the name suggests and not just coconut flavouring, like what other places could have used. For the record all other ice cream shops I’ve been to names their coconut ice cream as just Coconut. No mention of coconut milk being used and no mention that any of the ingredients are from Thailand.

The coconut milk taste was very fragrant like fresh coconut milk, nothing stale and smelly. The texture of the gelato was smooth and creamy too, not icy or choppy. It was really gelato done properly. As for the much neglected vanilla flavour – it was great too, but I wished I had more of the coconut. Basically the gelato here is very fresh and isn’t anything too artificial. I always appreciated fresh home-made ice cream (so in Singapore, I tend to only get ice cream from local chains and not international franchises) and this was distinctively home-made with fresh ingredients.

At this point I was still thinking I am in a random shop in Philly having some secretly good Thai Coconut Milk gelato but I was wrong – Capogiro is apparently known to be #1 in the world and they put up a poster on the wall to let customers know about that, including me. This sounds like one of those self-proclaimed titles but a quick check on the internet proved it to be legit. (Free Wi-Fi, by the way!)

They were named under National Geographic’s best 10 ice creams in the WORLD and ranked #1 beating so many other countries. It took me a while to understand that this means the unassuming gelato shop I am in right now is better than millions and gazillions – no, ALL other ice cream shop in the world and I probably can forget about finding good ice cream ever again after my taste buds gets changed for life. Maybe Mars or the Moon has better ice cream but for planet Earth it’s Capogiro.

I mean if it was just a regular food blogger like me, who hasn’t been all over the world, you shouldn’t take it too seriously. But this is Nat Geo and they are known to be travelling everywhere and they know everything.

“Made with the freshest ingredients (such as milk from Amish grass-fed cows), the artisan gelatos and sorbettos handcrafted each day at Capogiro Gelato include flavors not seen anywhere else—Madagascar bourbon vanilla, melograno (pomegranate), nocciola Piemonte (hazelnut), Saigon cinnamon, Thai coconut milk (with a dash of rum), and zucca (long-neck pumpkin).”

Ah! So the it’s rum. A little alcohol always makes everything look (in this case, taste) better.

Anyway, Google results also indicates that this ice cream brand has quite a lot of loyal fans and some New Yorkers claim it’s better than anything in New York. Apparently they only have shops in Philadephia and in some Gourmet Grocers in a few other states. This dashed my hopes that someday they will come to Singapore since they can’t even open a scoop shop in New York, the city which has almost every good food in the world.

If you are in New York City and is a serious gelato and ice cream fan, do pop by Philadephia. The bus ride on Megabus is only USD$1 if you book early enough (not a scam!) and is less than 2h long.