It was my last day in Paris and there’s no better thing to do than to enjoy a good meal. This visit to Paris would be futile if I didn’t get to try Septime and thankfully I secured reservations just in time! I actually did not plan to have this on the very last day, but I did not anticipate that the online booking was so competitive. I failed for a couple of days and for the very last chance, I made sure I was up at 6am (5:45am in fact, to make sure my internet connection was working fine) Singapore time to refresh the system.

For most Singaporeans, such thing isn’t new because we all probably would have gone through that many times before during our tertiary school days, snatching the favourable modules or tutorial slots.

Anyway, the reservations were full by 6:03am and I am thankful I managed to get it in time.

The restaurant was not very big and the setting was more homely than uppity. This did not really matter to me because I was only interested in the food. I mean, if it was so hard to secure reservations, people wouldn’t choose this place for gatherings and stuff so ambiance would not be priority.

For lunch, they had a 3 course menu for €28 as well as a tasting menu for €55. I really wished I could get the tasting menu but the others wanted to go light. This means I have to go back to Paris again.

I am convinced that sea bream is in season.

Just plain old egg (done to perfection) with salad in dashi. The yolk was perfectly runny. Unlike Japanese versions, the egg was not marinated but the stock from the rest of the dish made up for the lack of flavour. 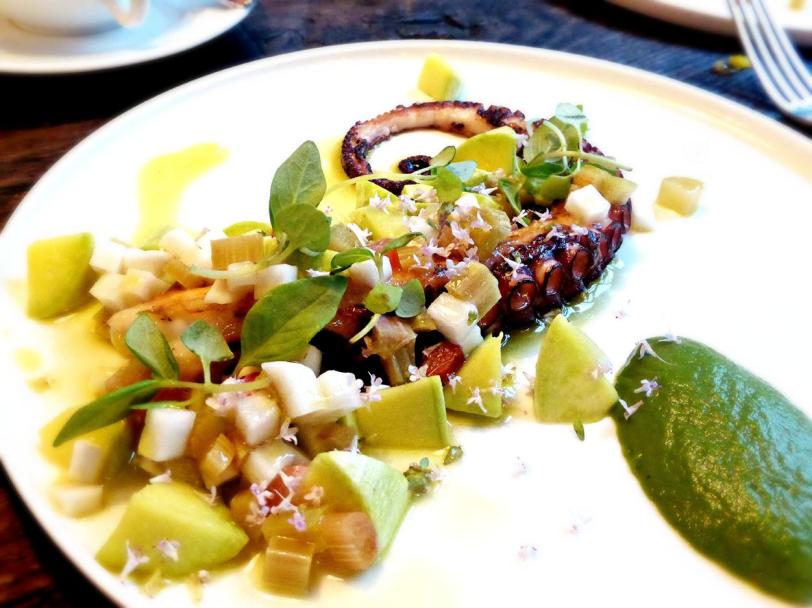 The other choice for main course was pork so this was the obvious choice for me. I love octopus when done right and I had a lot of confidence that this would be. Indeed, it is probably the best octopus I ever tried. The tentacle was so tender that it was probably thoroughly massaged before cooking. The most tender octopus ever.

The last course is either cheese or dessert, your choice. We took both to share. Cheese in France is always different and I regret to say that this is the first cheese and it was the last day in Paris.

The only dessert on the menu was floating island with elderberry and vanilla. This was made to be on the sweet side, but of course if you do not like it sweet you can always opt for the cheese. This was one of the better floating islands I’ve tried despite the sweetness and the elderberry gave an interesting twist.

I definitely think that Septime is worth trying and is worth the lengths gone through for securing the reservations. A must try in Paris.