First thing in the morning today, I planned a trip to Uji, another city in Kyoto Prefecture just about half an hour away by train. From Gion Sanjo station, I took the Keihan line which required a transit at Chushojima all the way to Uji. Uji is famous for green tea and matcha and it is the place where tea is produced in superior quality. As a matcha lover, Uji is a place I definitely wanted to visit. Uji is located between Kyoto and Nara, so if luggage isn’t a problem, it is actually better to stop over in between travelling from Kyoto to Nara. Other than tea, Uji also has some UNESCO sites like temples and shrines. 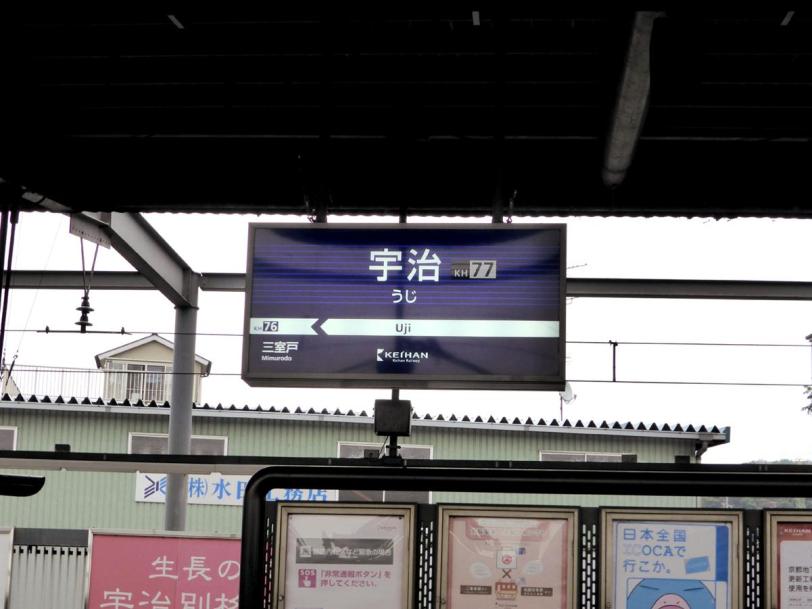 Uji is quite a rural place but most of the things I wanted to visit were around the train stations. 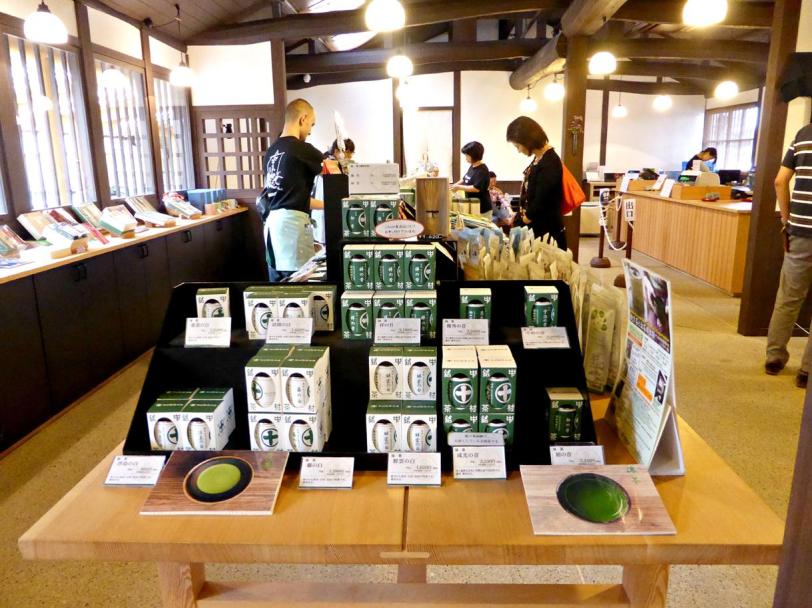 My first stop was Tokichi Nakamura, a shop specialising in tea with a very long history. I signed up for the Hiki-cha and tea ceremony experience.

This is what is included: 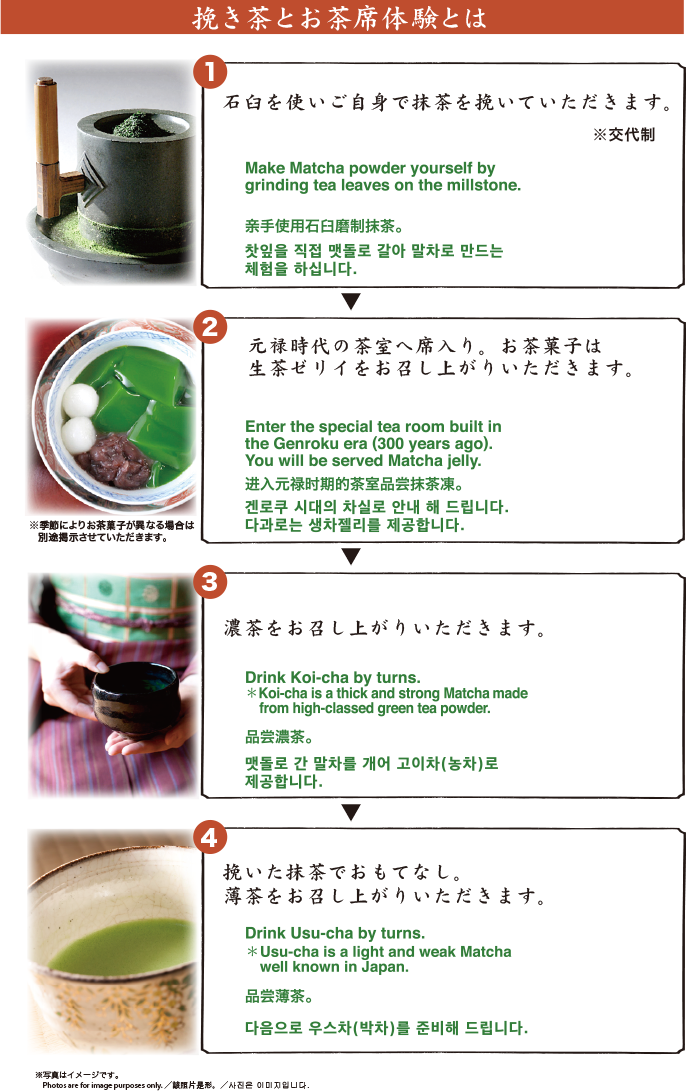 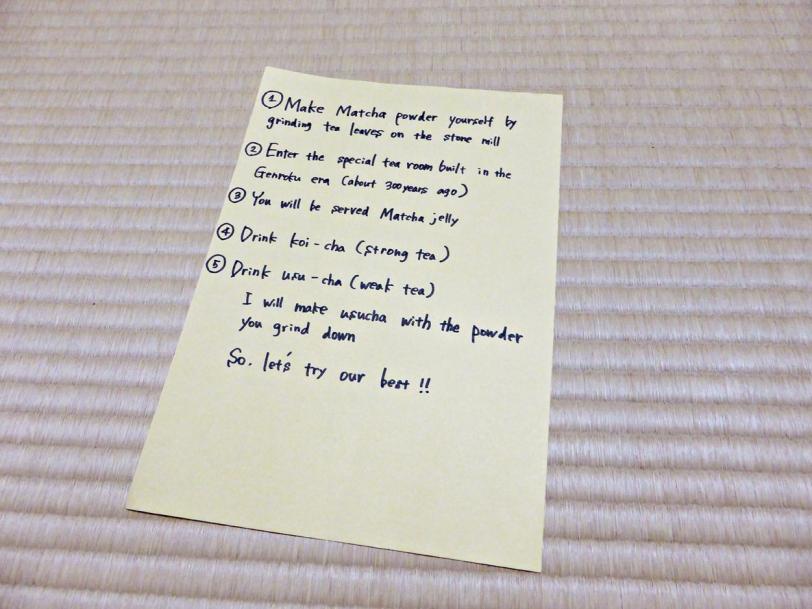 As the guide does not speak English, he could only explain everything very briefly. He explained that this shop has been passed down for generations and is a very old name in Uji. After the introduction, it was time to get grinding. 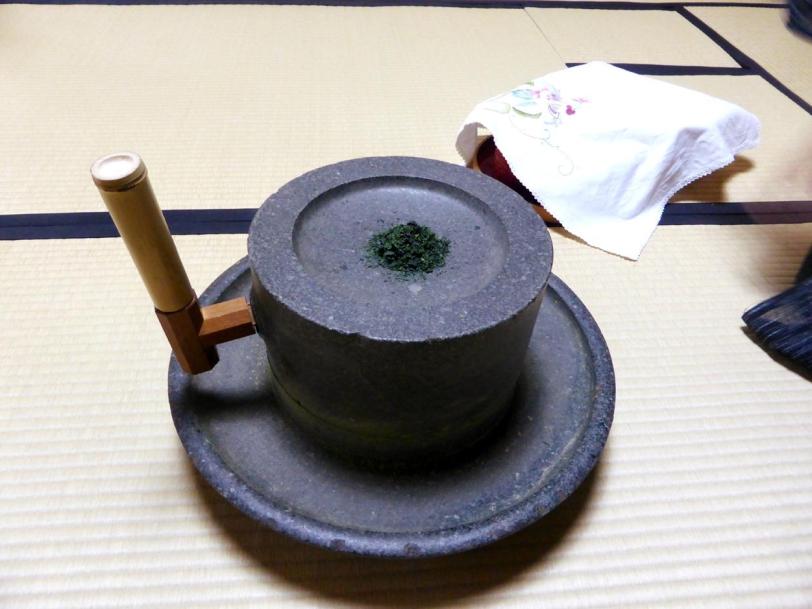 Matcha is traditionally made by grinding tea leaves in a stone grinder. 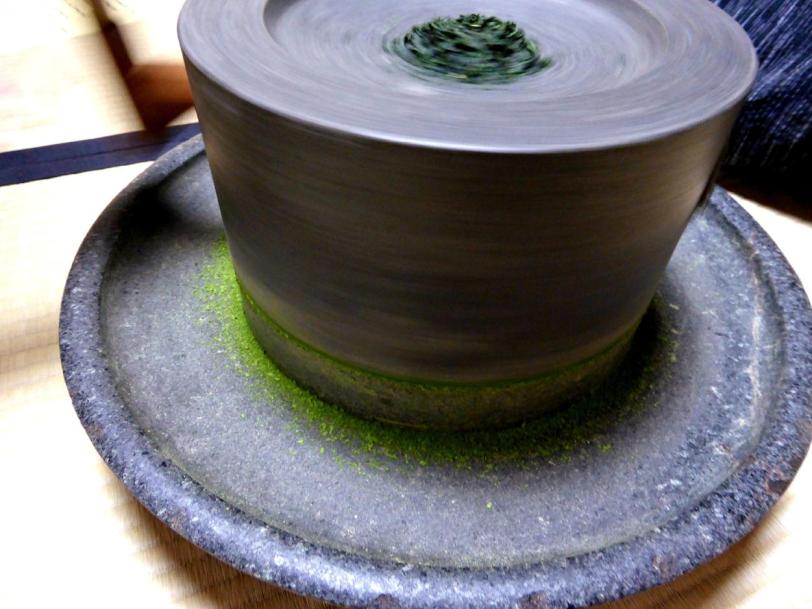 The stone grinder has to be worked by hand and for good quality matcha it must not be spun too quickly.

I found it quite amazing to see how finely grounded the matcha turned out! This powder was used later on for Usu-cha. 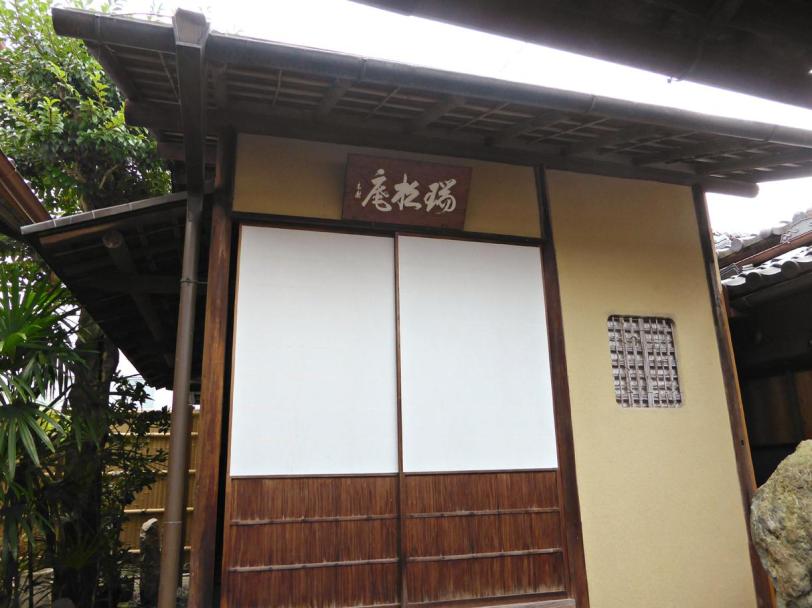 This is the tearoom where the tea ceremony was held. No photos were allowed inside and I think that’s the rule traditionally. (Another tea house in Ibaraki disallowed photography too.)

Sitting down Japanese style on the tatami floor, we were served a bowl of matcha jelly, shiratama dango, adzuki and kuri (chestnut) dessert which was really THE BEST. I so which I could sneak a picture of it but no pictures unfortunately. The matcha jelly was so soft like nothing I’ve ever tried before. The matcha flavour was almost like the real thing. It was so good. This dessert is sold at the retail shop and café too, but in a different combination.

Koi-cha is then prepared in front of us by the tea master and served. Koi-cha is not the usual kind of matcha we see around. It is literally called thick tea and is like espresso compared to Americano. It was like matcha powder concentrate. The powder used for Koi-cha is of a different grade from Usu-cha, and generally costs more. More powder and less water is used to prepare a cup. The matcha was very thick, yet not bitter at all.

Next, the usu-cha obtained from the manual grinding previously was prepared in front of us by the tea master. Usu-cha is literally thin tea and is the consistency of the typical matcha found in most tea houses. The procedure of matcha preparation looks simple but takes skill. The chasen (bamboo whisk) and bowl as to be warmed. Next, the matcha powder was sifted into the bowl and water heated on a charcoal stove of the correct temperature (around 80⁰C) was added. The tea master whisked the matcha until it was nice and foamy. This step looks easy but it requires a lot of skill – I have personally tried and was no where as skilled as he was in doing this. The tea was very smooth and not bitter to taste.

That was the end of the tea experience and I enjoyed it! It cost ¥2160/pax and can be reserved online by dropping them an email. There are 4 sessions a day and it is a good idea to take the first session because by the time you’d be done, it’s just nice to have lunch in the café. 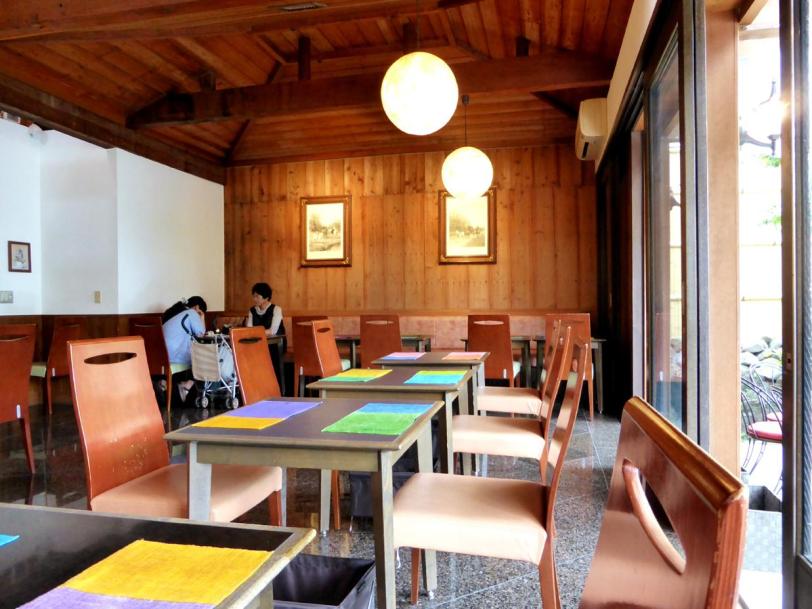 The café is very popular and the waiting list (no reservations) for walk in starts way before the opening hour. You could write your name on the waiting list and come back when the café opens for service at 11am. By around 11am there was already a queue as the first batch fills in. The alternative is to try their branch which is nearby, nearer to Byōdō-in. 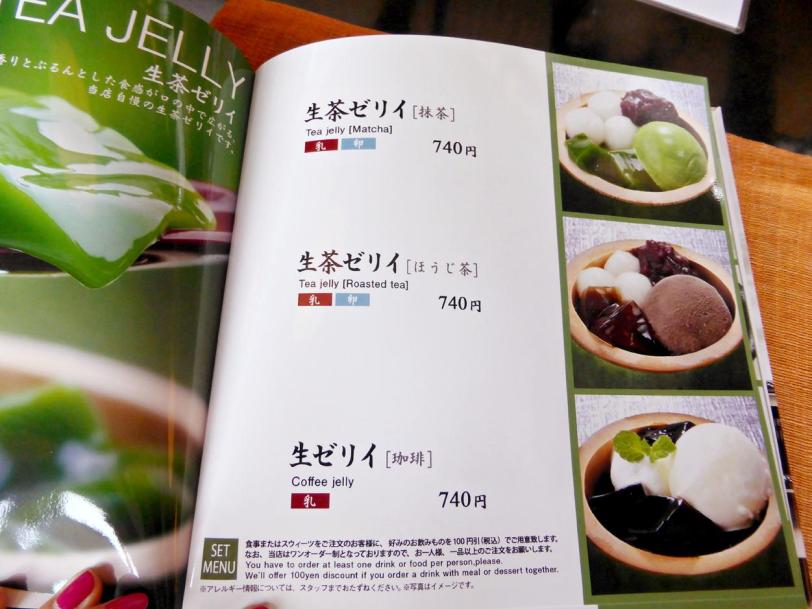 From what I noticed, almost everyone ordered the matcha tea jelly. This should be their best seller! 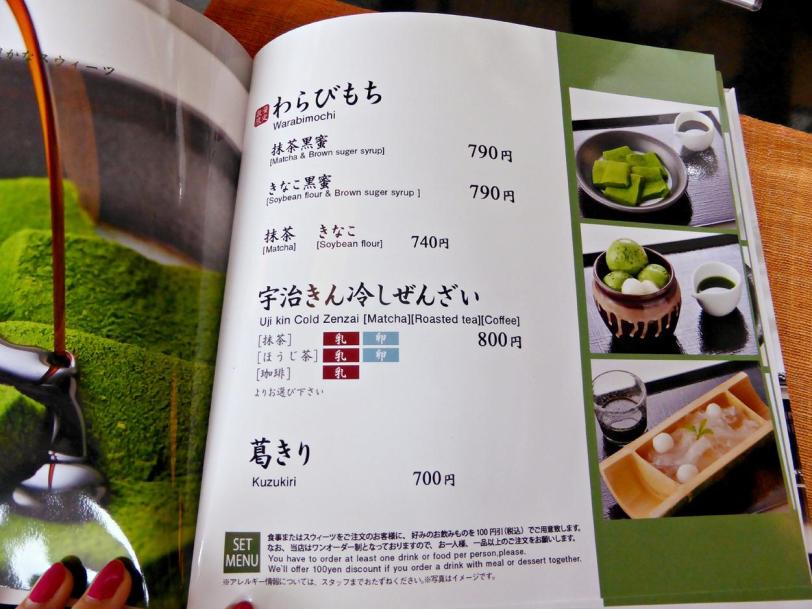 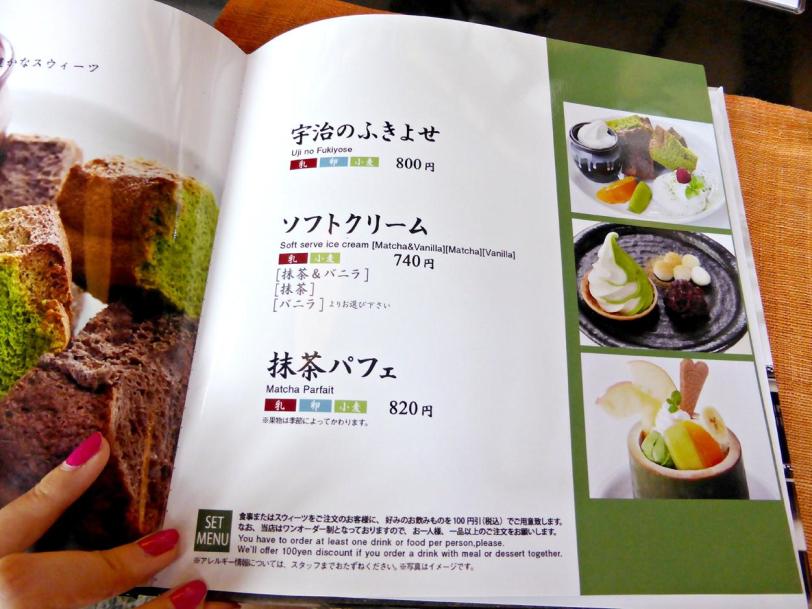 Honestly everything on the menu looks to good. 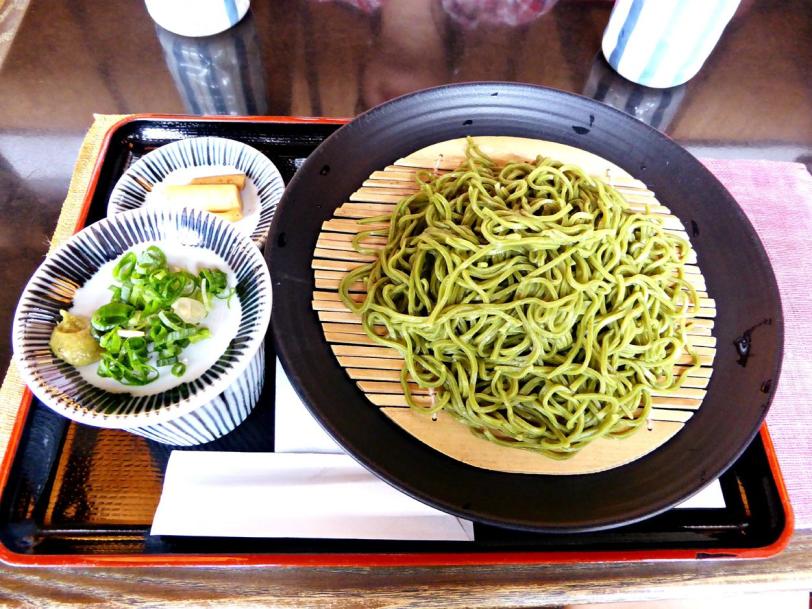 Desserts are the famous thing here but since this is lunch, some cha soba doesn’t sound that bad either. The portion looks big but I finished everything, with lots of space left for dessert. 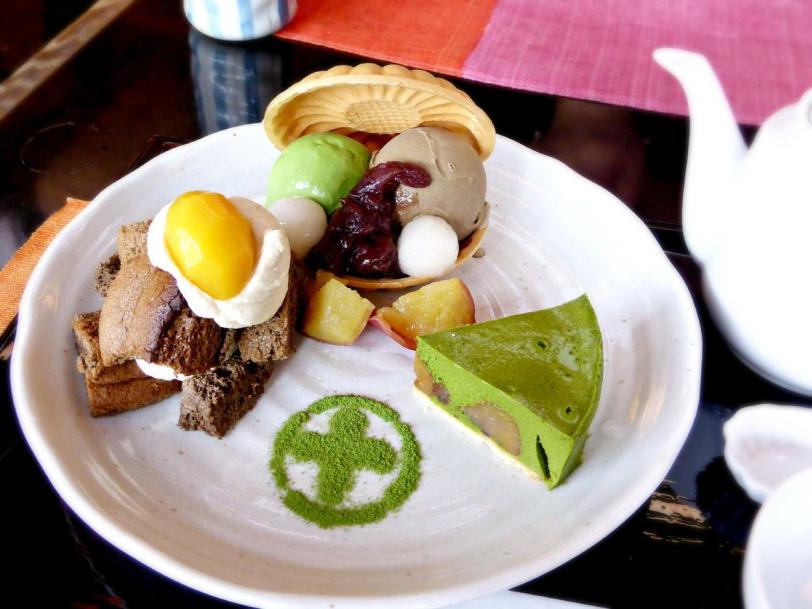 This is the Autumn special tea set including a pot of houjicha. It comes with matcha chestnut cheesecake, sponge cake with chestnut cream and chestnut, and wafer with houjicha and matcha ice cream with adzuki and shiratama dango. Everything in this set was so good, I could have another one all by myself. I especially loved the chestnut. Actually I love everything. 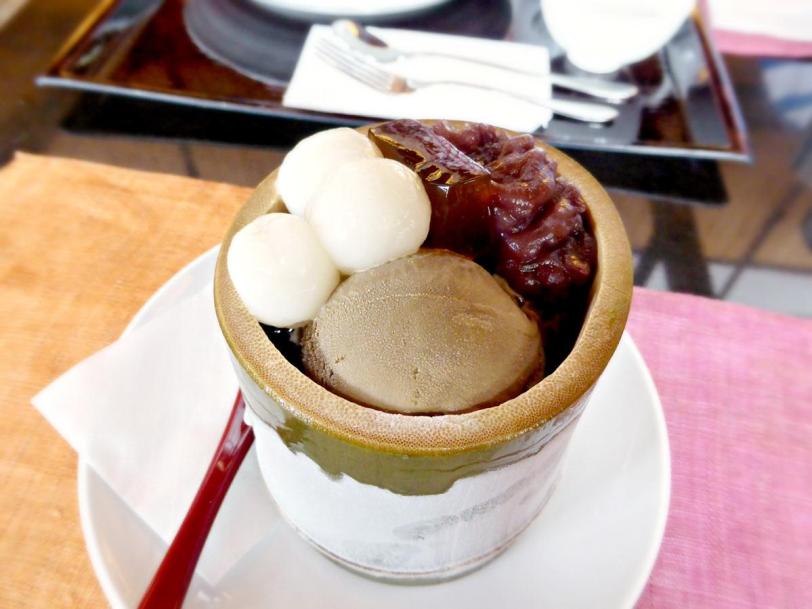 Houjicha ice cream with jelly, adzuki and shiratama dango just because during the tea ceremony I already tried the green tea jelly. While this was nice, the green tea version was better. I can understand why everyone is ordering the green tea jelly – because it is really the best! Anyway the jelly though in houjicha flavour was still as soft and good.

Trying only 2 desserts was such a shame. I should have tried one of everything because the quality is the best. I am very sure nothing of similar league can be found in Singapore, or probably even in other parts of Japan. Might make a trip to Uji again just for this! 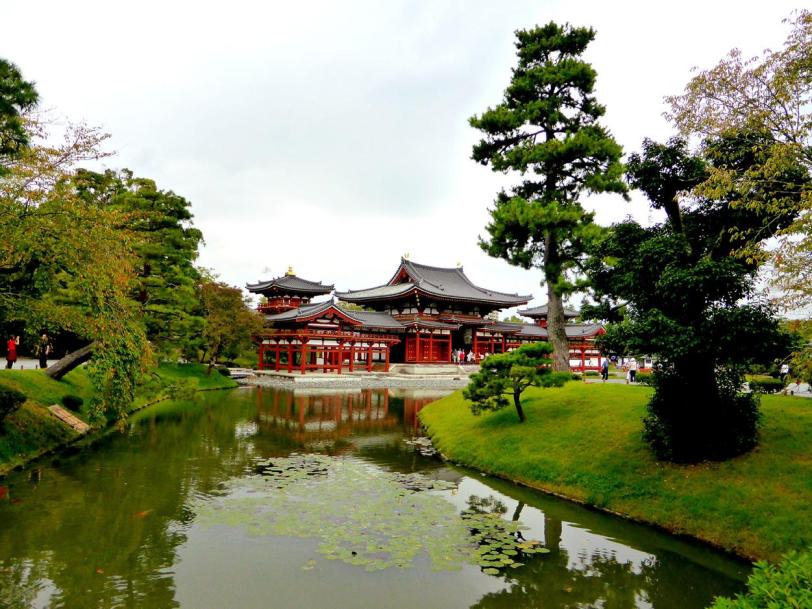 The other attraction of Uji besides the matcha was Byōdō-in, the most famous temple in Uji. It is one of the UNESCO sites in Kyoto Prefecture. The temple was beautiful and in my opinion more enjoyable than Nijo Castle in Kyoto. 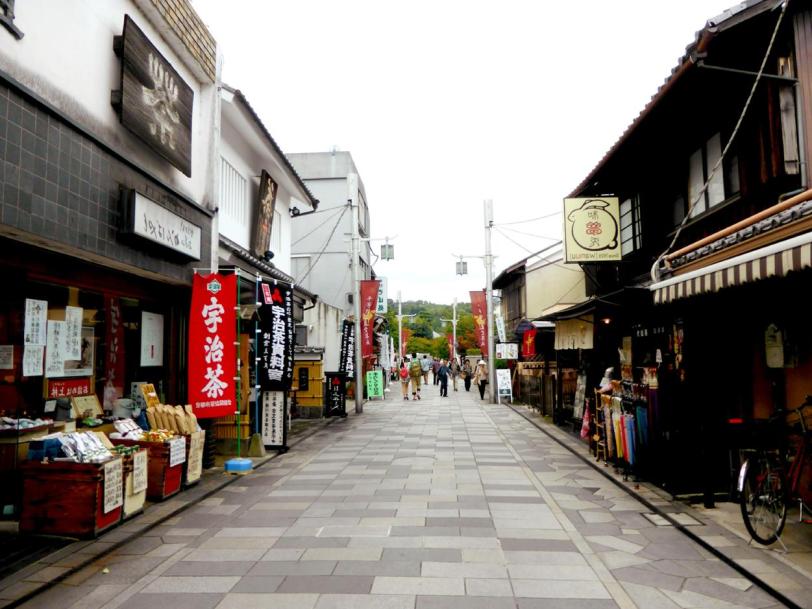 Leading to Byōdō-in are many shops selling local goods, which in my opinion, are actually quite good. I happened to step into a shop not realising what it was about but later on I realised it was an outlet of a famous brand of matcha, and not just any random shop selling a mixture of brands! 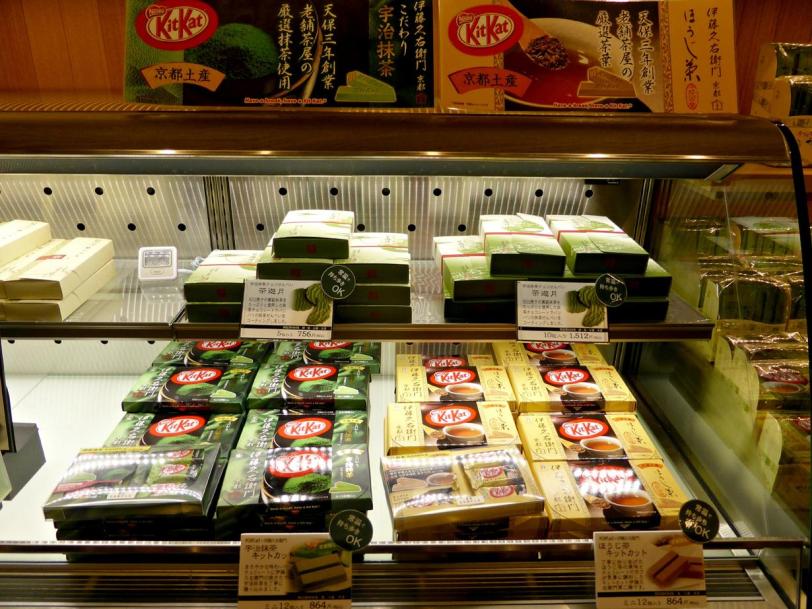 These 2 Kyoto special Kit Kat flavours were made in collaboration with Itoukyuemon (伊藤久右衛門), the shop I happened to step into. Note that this matcha flavour of Kit Kat is different from those sold in the foil plastic packs, branded under 大人の甘さ. These boxed ones uses matcha from伊藤久右衛門 while the foil plastic packet ones uses other matcha. 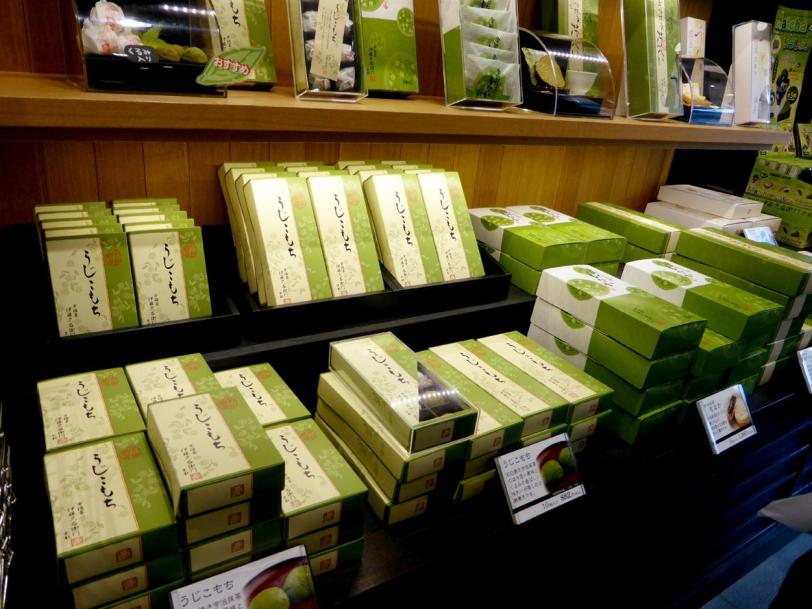 They sell all sorts of very delicious looking matcha products. 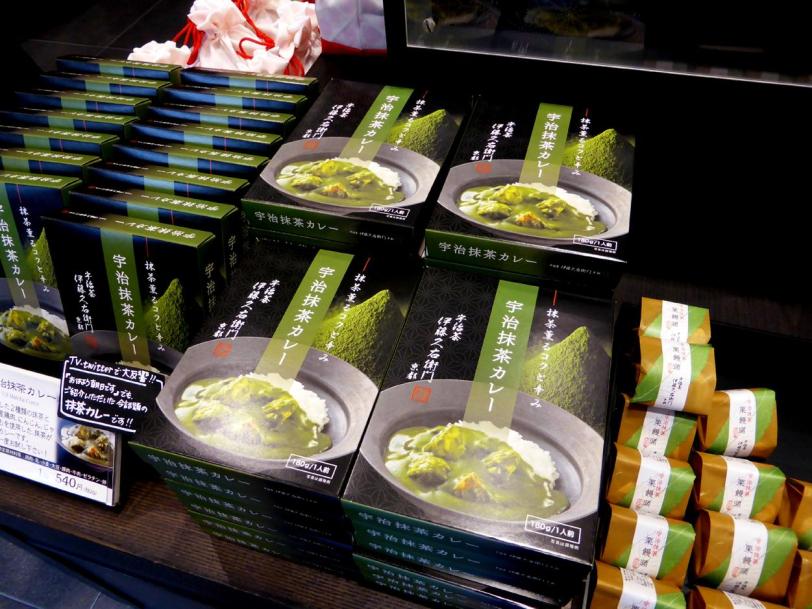 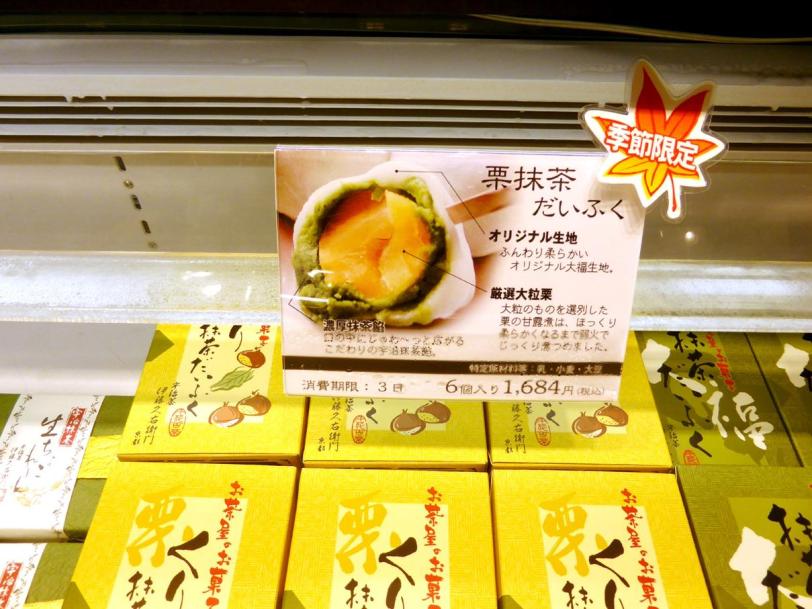 For this season they have chestnut products. I so regret not buying. I did not realise that this was a reputable shop! 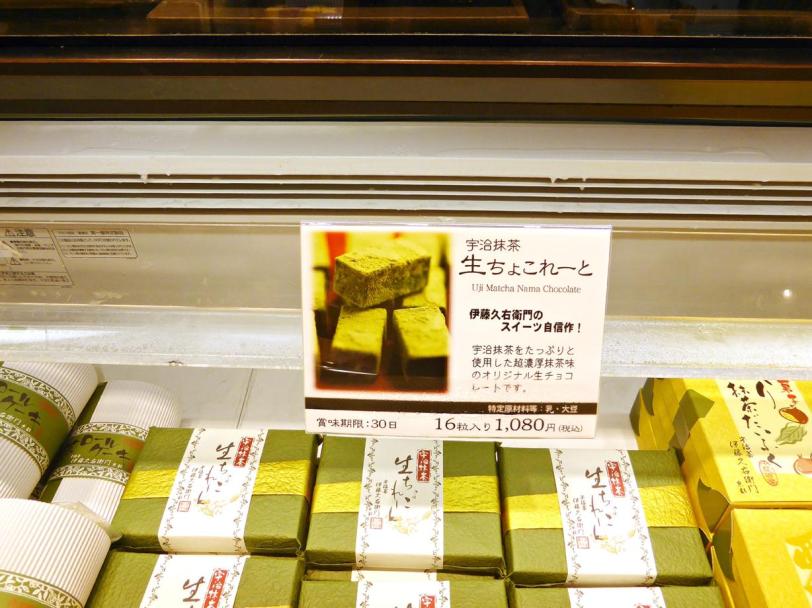 I would love to get this if not for the fact that it needs to be refrigerated. I did get 2 wagashi that was sold individually and ate it on the same day. They were delicious. I think this shop is worth checking out and stocking up on goods to bring back! 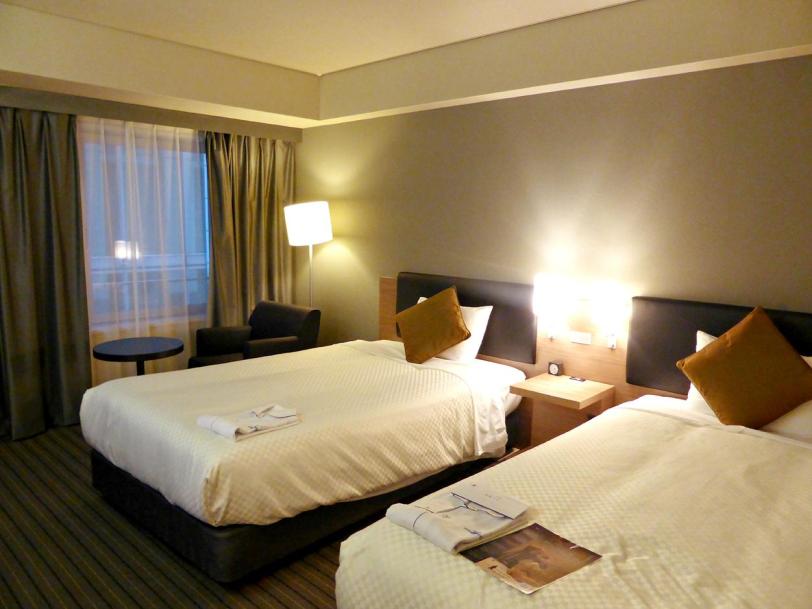 The rest of the day was spent in Osaka. I stayed a night in Hotel Unizo Yodoyabashi. The location was great – it was a relatively quiet area in a more business like district, but yet really near to Umeda and Namba. The hotel was very close to the subway station and it’s only 1 stop to Umeda.

First thing was to check out the underground of Umeda station which links several department stores. My favourite is the basement of Hankyu which has a good selection of pastries!

I wanted to try this in Paris but had not enough time to. 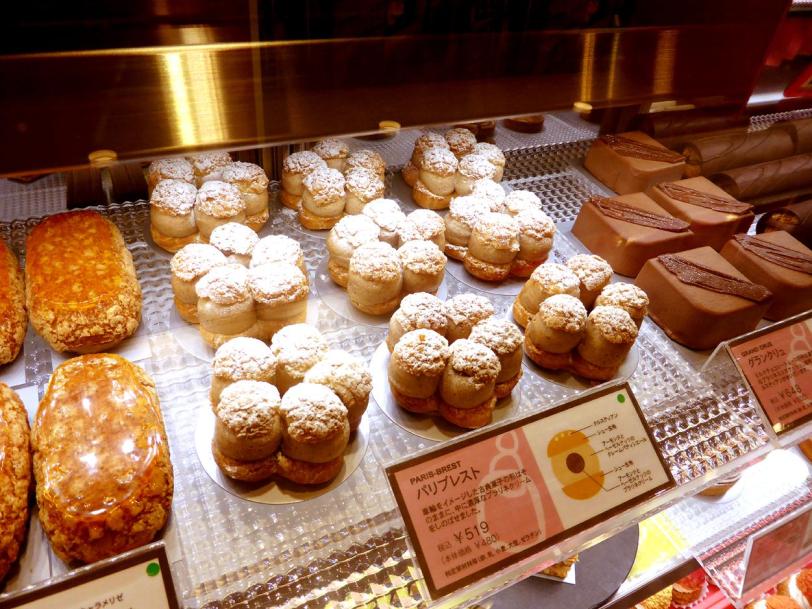 The pastries here are mainly French style rather than French-Japanese. Those I tried were on the rich and heavy side, which I personally do not prefer. 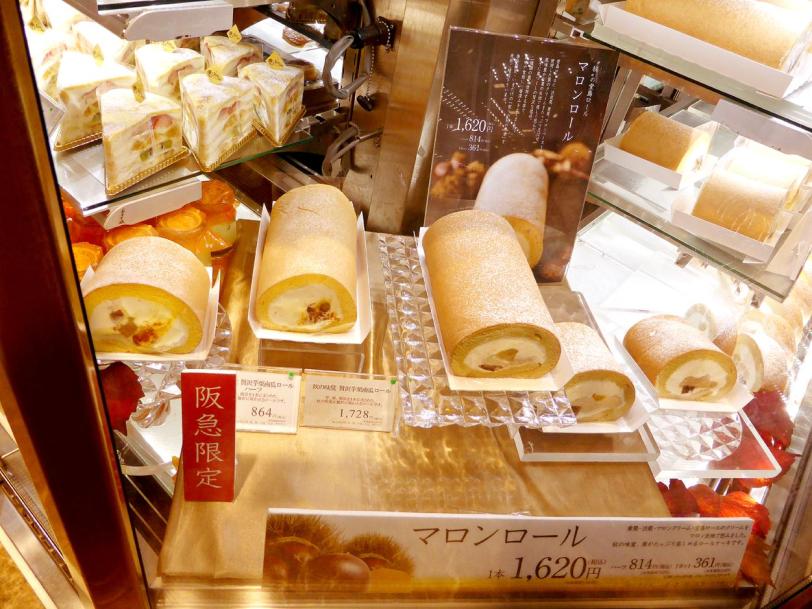 Mon Cher is famous for their swiss rolls and for Hankyu there’s an Autumn special flavour of chestnut! I bought a slice to try and it was so good. The cake was very soft and the cream was very smooth. They even serve soft cream ice cream under the same brand for people who love their special cream. 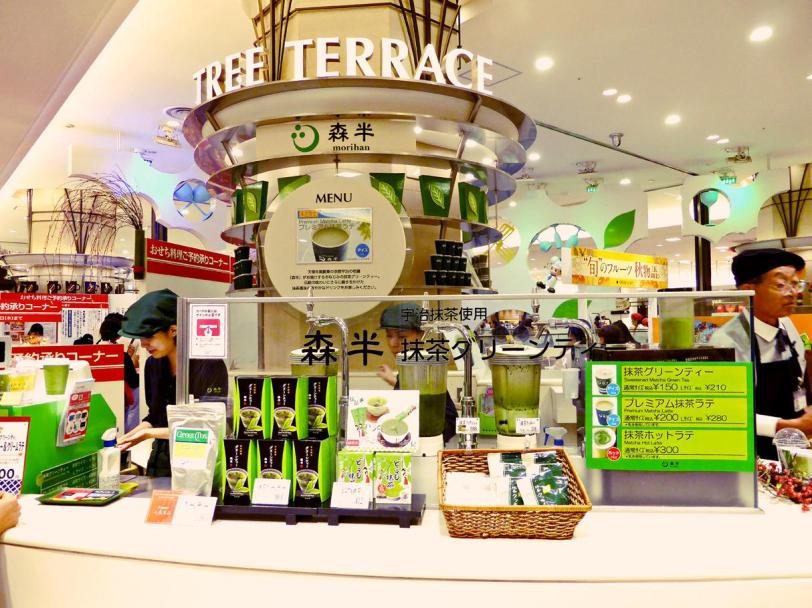 Morihan serves matcha drinks like matcha ice blended with milk and also plain matcha. I tried this before last year and remembered it to be extraodrinary but after having lots of good matcha in Kyoto and Uji, this was just normal. 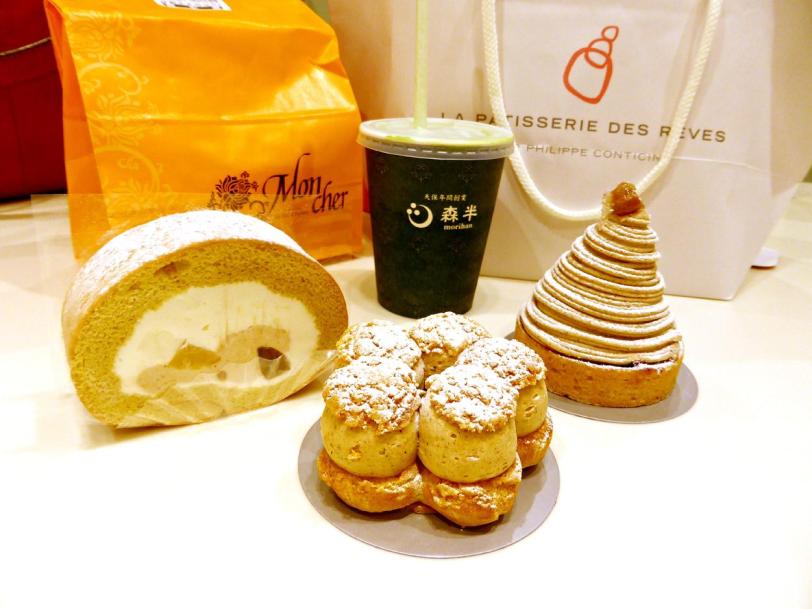 The Paris Brest from La Pâtisserie des Rêves was way better than the Mont Blanc which was way too sweet. The Chestnut special swiss roll from Mon Cher was very nice. 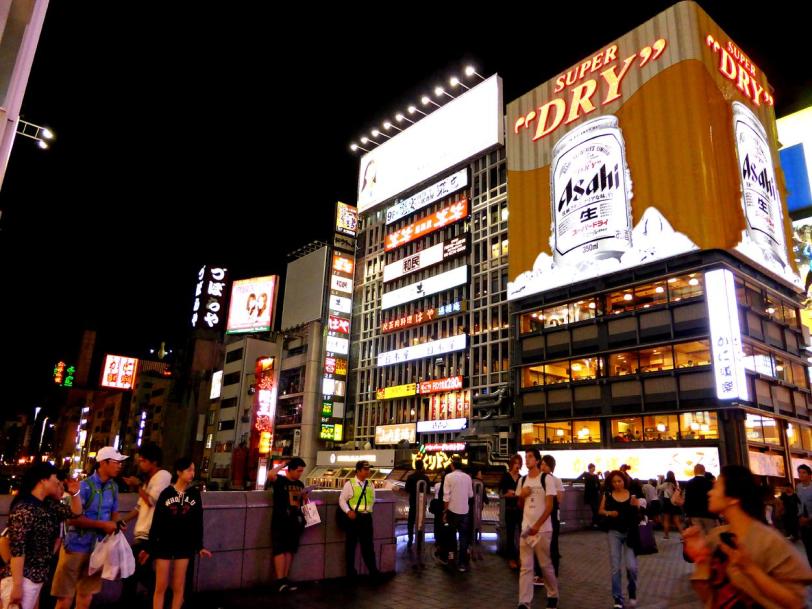 Osaka is very vibrant at night especially at Shinsaibaishi, the famous shopping district. 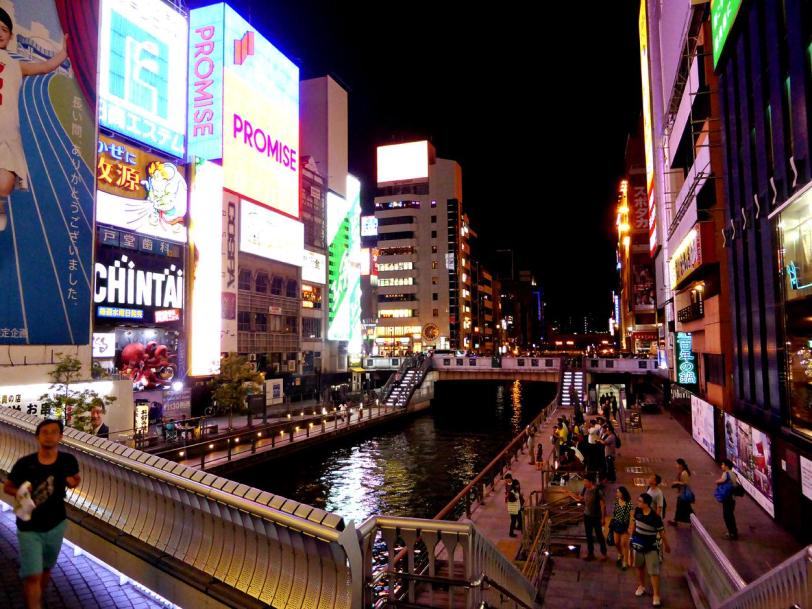 For food, Dotonbori is the best with takoyaki everywhere along the street. Some stalls have long queues while others have none. I honestly feel that it is all about the same and it’s not worth to wait in line. Sometimes the queue can take forever if the chef decides to do things really slowly. 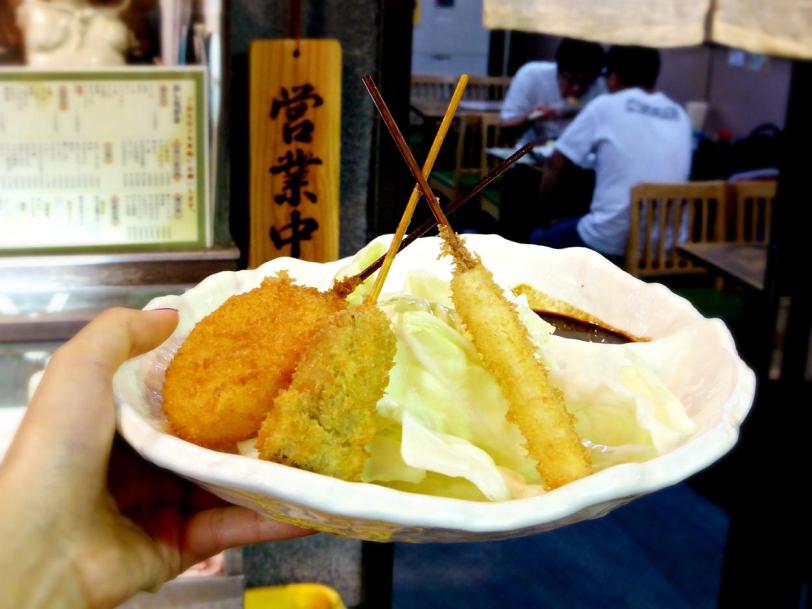 Kushi-katsu is an interesting try too.