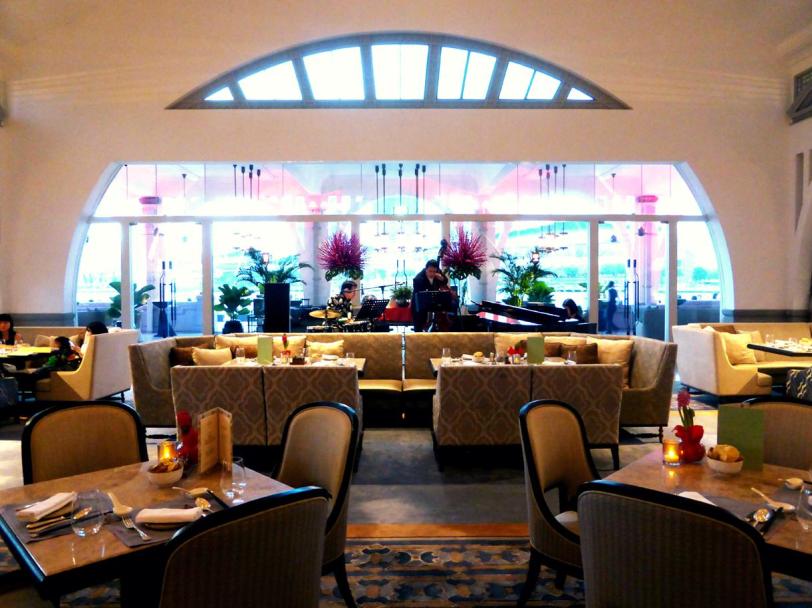 The Clifford Pier of Fullerton Bay Hotel is one of the nicest looking restaurants I’ve been to lately which is non-fine dining. I love the tall ceilings, classy looking furnishing and the presence of live music. The only thing which wasn’t matching up was the poor service, but I can try to unsee that. The food options here are mainly local food with some twists (like with better quality ingredients) but there are international options as well. The most famous item would be the lobster roll which was what I was here for.

Assorted crackers were served to every table instead of the usual bread you see in other restaurants. I liked the belinjau chips with sambal chilli.

As mentioned, this was what I was aiming to try. The roll was quite small and now I’m regretting not having more while I was in New York, twice. However, it was enough to fill with dessert later on. The bun was not outstanding but will do. The lobster filling was decent enough but of course, nothing compared to those from New York. The truffle fries were good though. Fullerton Bay Hotel has been known for good truffle fries in the first place so I don’t expect anything less. What was surprising here was the ketchup – somehow it tastes better than regular ketchup and we finished everything! Overall, I would not mind having this again.

The dessert menu had many local influenced items which I was interested to try but settled for Pandan ice cream in the end, upon recommendation by the staff as ‘something different’. Honestly I was just expecting to see a scoop of ice cream but was presented this instead. And no, it is not the same as those $1 (is it still $1 nowadays??) ice cream from the roadside. The pandan flavour was strong and I liked it. While the loveletter roll was mainly ornamental, the crumbs on the side gave a nice texture to each bite. The coconut jelly was well.. I welcome anything coconut and it did make the plate look prettier.

Overall: A lovely restaurant which is not too expensive but with beautiful ambiance.