An amazing trip to Sendai, Miyagi Prefecture of Japan, last year changed my perception of beef tongue (gyutan) forever. Like many others (I believe), the sound of beef tongue is simply not appealing, just like other weird parts of the cow or ox. This is one delicacy seldom talked about outside of Japan (or outside Sendai actually) and I’ve missed it so much. I would love to revisit Sendai again to try more!

In Singapore, a country known for having everything in the world (but substandard versions), we have ONE Sendai cuisine restaurant which serves gyutan and other Sendai specialties like Zunda. I did not have very high hopes because even in other parts of Japan like Tokyo, the gyutan standard isn’t anywhere near Sendai’s. But beggars can’t be choosers – having one restaurant in Singapore is better than none.

This restaurant located in Millenia Walk has been around for a while and seems to be surviving well. The low tables (Japanese style) were all taken for the night (by Japanese customers, of course) but the counter seats were good too. At least I had full view of the cooking, like what I experienced in Sendai itself. The restaurant was small and quite casual but cosy and comfortable. It felt authentic to me.

Besides gyutan, they also serve oden, katsuo (also known as bonito or shipjack tuna) seared tataki stye on the spot over rice straw fire, and some other Miyagi and Tohoku style dishes. You just won’t find sushi or sashimi here – this is Sendai cuisine. I like how they adhered well to the theme and not compromise serving dishes which aren’t typical of Sendai or Tohoku. Even the sake imported was from various prefectures of Tohoku. 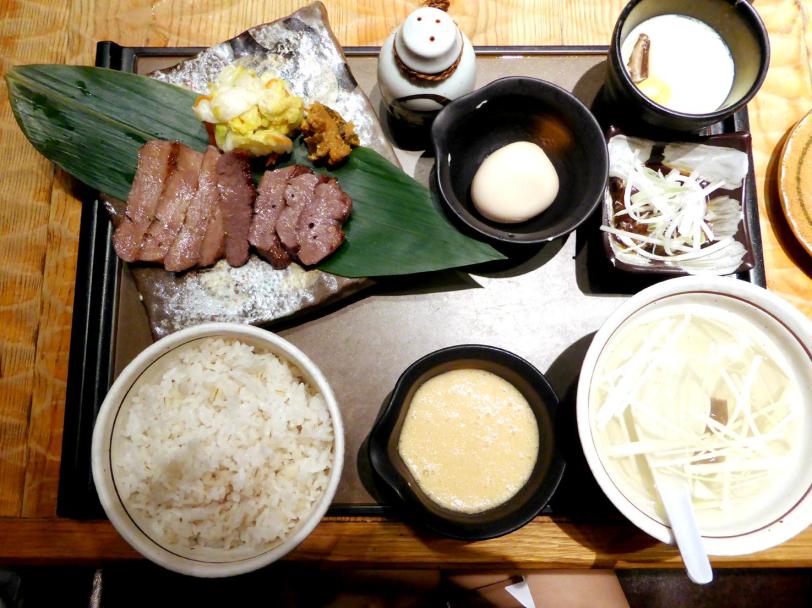 I had no proper meal all day so I ordered this set which comes with more side dishes.

The soup here is the same sort that I was served when I had Gyutan in Sendai!

The other sides I got included chawanmushi, nitamago, some braised gyutan and an egg roe sauce which was to be poured over my rice (which had grains of barley in it).

If you realise, it’s kind of egg overkill and I probably ate the equivalent of 3 eggs in this set! The chawanmushi was very smooth, soft and flavourful. It was the sort that would disintegrate in the mouth.

The egg roe sauce was strange – I’ve never seen something like that before. The texture was like a non-Newtonian liquid.

The nitamago was probably cooked 6.5 – 7minutes with the yolk semi solid like a thick gel, not runny at all. (it’s still within my approved category, so it’s ok).

Of course, the star of this meal was the gyutan itself. I started from right to left and the first few pieces were chewy, impossible to break off with teeth. I wouldn’t say I was disappointed because I did not expect to be served the same standard as what I had in Sendai (I went to a good restaurant too which is impossible to rival).

Texture aside, the flavour was still good. I know it’s not easy to make gyutan tasty because it’s an odd part of the cow or ox after all. Ancient people in Sendai resorted to eating the tongue because it was a cheaply available cut and somehow they managed to make it tasty. I experienced the totally opposite from a bento on the Shinkansen so I know clearly what bad gyutan tastes like. This one was considered good.

Towards the last few pieces on the left, the texture was significantly different. It was way more tender and not chewy at all. Only now did I recall that for the ox tongue, there are certain parts which are better and the good restaurants in Sendai only serve the best parts, excluding the chewy ones. I suppose the good restaurants in Sendai use only the tender areas and the chewy parts in probably end up in bentos on the Shinkansen.

Yamagata is another prefecture of Tohoku, near Miyagi and Sendai. The flavour was unique and edamame based. It tastes similar to corn ice cream in my opinion.

I miss Zunda from Sendai! This one tasted more like the sort from hotel breakfast buffets rather than the one from the Zunda speciality café. Anyway, it was good enough because I missed the taste Zunda.

Ambiance: 7.5/10
Food: 7.5/10
Value: 7/10
Overall: Since this is the only place in Singapore for Sendai cuisine, you got to try it if you are curious/ feel like eating beef tongue.