After a 2 nights’ stay in Blenheim, the next stop was towards Christchurch because I’m home bound the next day. My flight to Singapore will be from Christchurch. Christchurch itself did not appeal to me, being somewhat more urban, so my attractions were along the way.

Today’s drive was another long one, down the coastal state highway 1. The various stops will be around the Kaikoura area. Kaikoura is another popular tourist area with opportunities to experience wildlife, like swimming with dolphins or whale watching. As it was winter and time was constrained, I did not do either since it would take up a few hours. Actually the truth was I ran out of money, these are expensive! 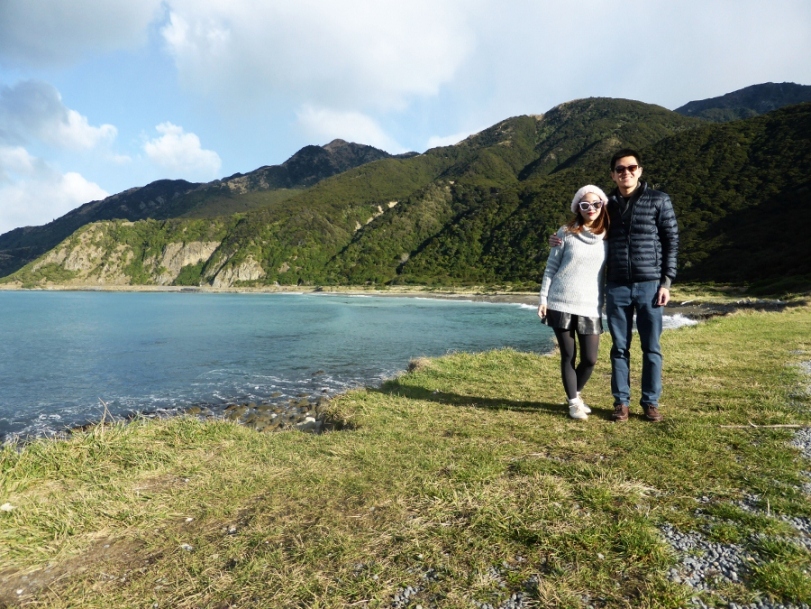 Plenty of opportunities for postcard-esque photos along the road. A random stop somewhere near our first stop!

Ohau Steam Seal Pups appears during winter. It’s a must see guys, simply because it’s free! These seal pups are 100% wild animals and they’ll be playing around the stream while their parents go out to fish. The best time to catch a glimpse of them is in the morning.

The pathway to the stream is about 10mins stroll. It’s an easy path to follow.

They move so fast, it’s hard to get a still picture!

Not at the stream yet, this was just along the way.

Finally at the stream, where the seal pups are swimming and splashing around. Do they not know that they’re so cute?

Next stop was a 5 mins drive down for crayfish at Nin’s Bin. Nin’s Bin is a food truck which is parked along the highway, pretty much in the middle of no where. They also have mussels here, but crayfish is the famous thing. Crayfish in Kaikoura is not the same as what we refer to crayfish as in Singapore! In New Zealand, crayfish is a lot like a spicy lobster, without the 2 claws. This species is resident to New Zealand.

They sell their crayfish by size and I have to warn that it’s not cheap. This is the smallest piece and it cost $62! If you happen to be unlucky, they may only have big ones that day. But anyway, I would say it’s worth it because spicy lobsters cost this price (or more!) in Singapore anyway. This was boiled and served cold with lemon. I would recommend this over the option for garlic butter sauce, because you’ll be using your hands a lot and butter would be too greasy. Besides, it’s good in naked taste.

Besides the chunk from the tail, you can get meat throughout the whole body and legs – you need to dig hard! I loved every bite. You may be able to find better ones in Kaikoura because they do have several restaurants in town, but it was an experience eating by the highway. 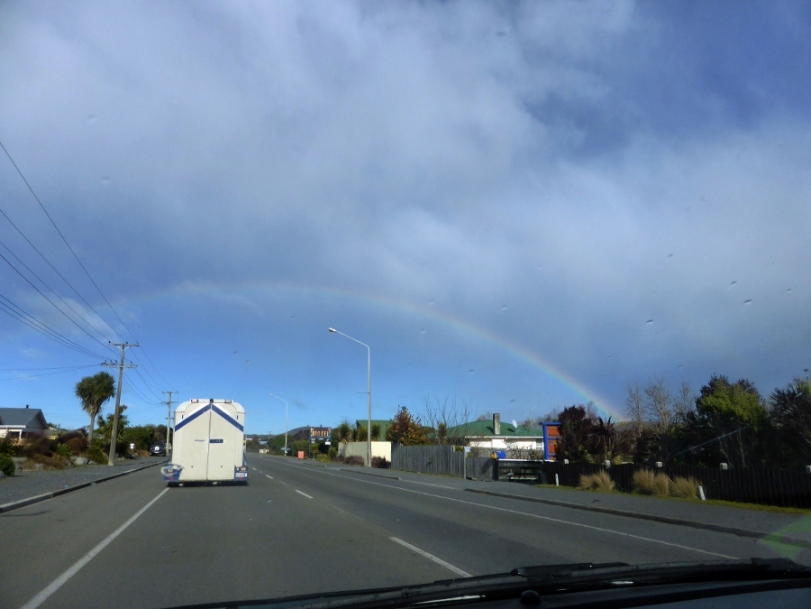 It was raining sporadically throughout the day and many rainbows popped up during the drive!

This fish and chips from Cooper’s Catch was pretty good! It was English style. The fish was $3 and chips $3 sold separately. They have premium fish which costs more too, but this standard one is fine. I can see this shop is popular from the amount of customers it has. It was the most budget friendly meal so far!

Just across the road was an ice cream shop. Here’s a boysenberry fresh fruit ice cream.

Kaikoura town has plenty of accommodation options if you would like to stay overnight. I didn’t hang around this area for long because the rain kept coming on and off. On hindsight, it’s a good thing I didn’t try to go whale watching or dolphin spotting today!

Best rainbow shot. It was more beautiful in real life. 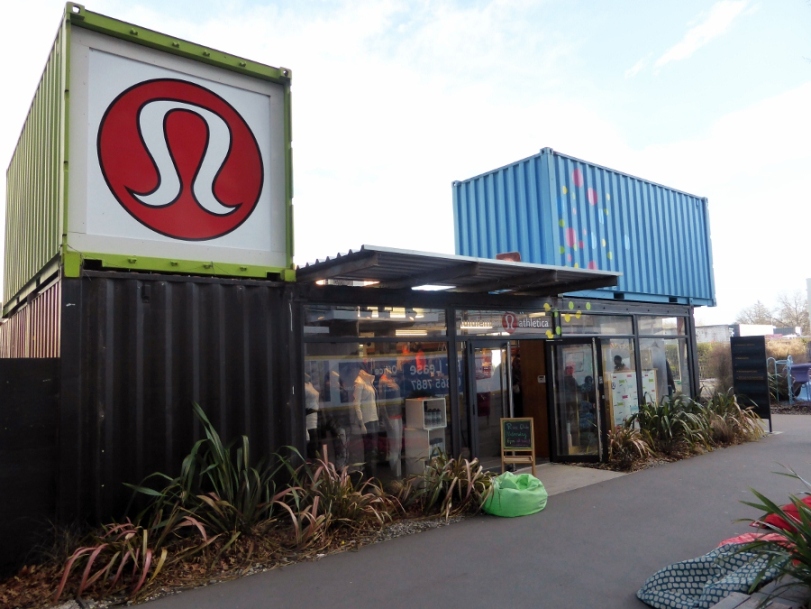 Finally we reached Christchurch after the super long drive. The best attraction to be would be the Lululemon store! It’s part of this container mall which was very unique.

The Re:START container mall was born from the need to breathe new life into the Christchurch central city, following the devastating earthquake on 22 February, 2011.

The mall is an outdoor one and it’s a pretty cool place with food stalls too and you can have a drink outdoors.

For Christchurch, most accommodations are in the form of motor lodges, also known as motels. I picked this one which was rated best on Tripadvisor. The property was old but the room was well equipped and comfortable. 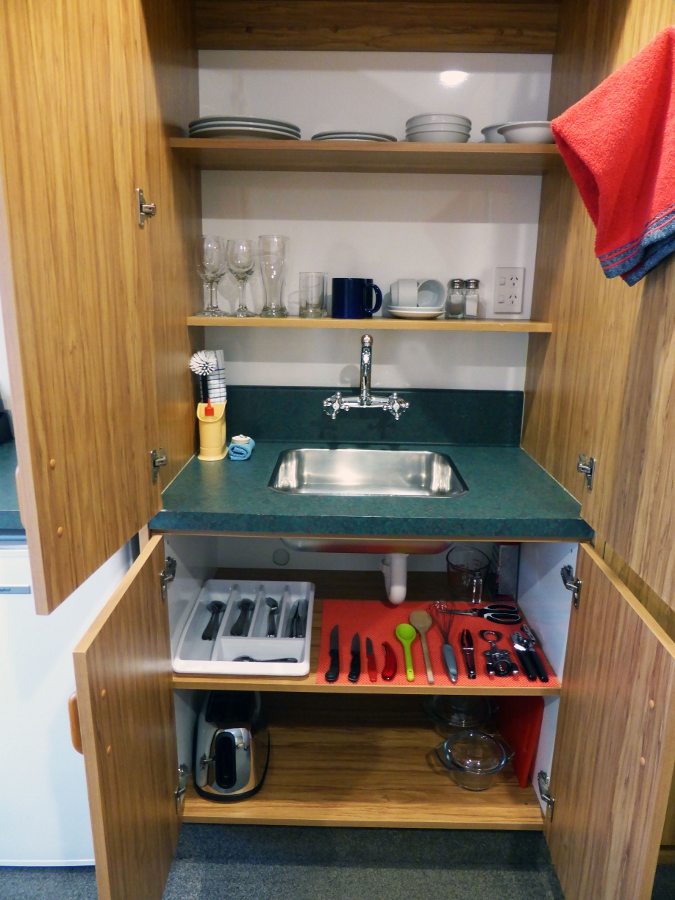 I wasn’t expecting this from a kitchenette. However, I wasn’t going to cook tonight.

Just around the corner was Pedro’s House of Lamb, a famous takeaway stall for lamb shoulder. They have this in Queenstown as well. I was really looking forward to this because New Zealand is famous for lamb isn’t it? 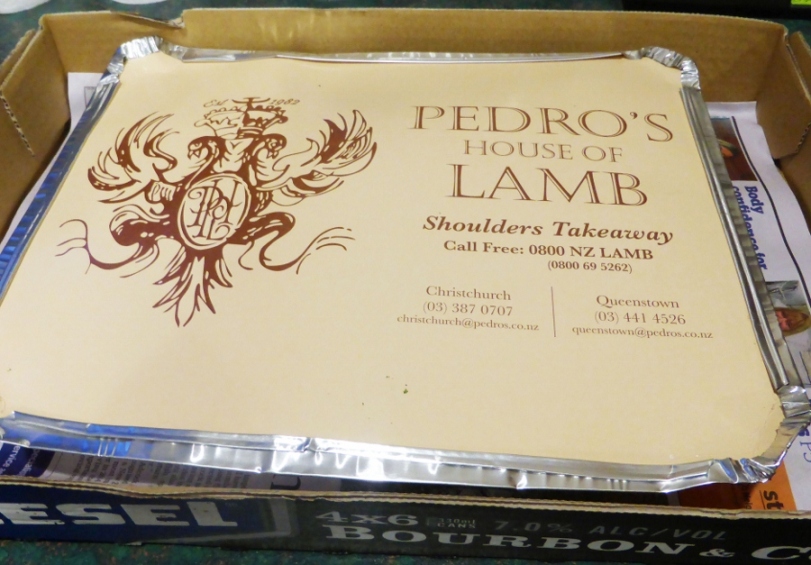 They operate only in the evening for dinner and everyone buys the same thing! They have it all prepared and when ordering I just ask for 1 set which cost $40.

The meat was so tender and soft! I have to admit, the taste gets a bit too much after a while. We also had cup noodles on the side and this meat went so well with the Nissin Roasted Beef broth. It was so good together, not kidding. Go buy this before heading there guys. You won’t regret. 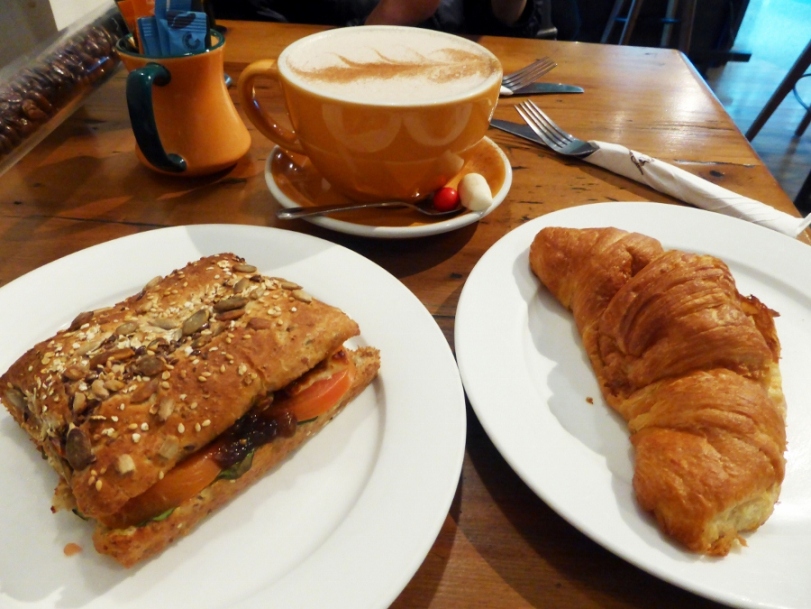 Last Chai Latte of the trip at Christchurch airport! My flight was 10:50am. That was the only timing to Singapore.

Meal on board with my SQ Hello Kitty. Isn’t it the cutest thing? Haha

Sidetracking, the plane used for this route was the old 777. Even the entertainment system was the old one – probably 2 generations before the latest one now. It doesn’t even have touchscreen. I haven’t been on this generation of planes for really long and was surprise it hasn’t been phased out! So guys when you book your flight on SQ, don’t assume you’ll get the latest version like the ones you see on advertisements. For a better experience, do try to book yourselves on the newer planes or those retrofitted . Not all Singapore Airlines experiences are the same!

Anyway, New Zealand was amazing. It’s a must go. I will go there again, for sure.