All my life I’ve never really had any special feeling towards Udon. In the very first place, Udon is not widely available in Singapore, with Udon restaurants fewer than your fingers. Most Udon I’ve ever tried were like from restaurants were serves all sorts of Japanese food, and never the specialty. Udon from such restaurants are never even handmade, or even imported fresh. Long story short, we don’t have good Udon easily available in Singapore, and those I’ve eaten were probably not very nice, hence I never really liked Udon.

This is all history now, ever since I came back from Kagawa “Udon” Prefecture. This trip has definitely changed my whole whole perception of what Udon actually is, and I am now a Udon convert!

Kagawa is most famous for Udon in Japan and their special Sanuki Udon uses ingredients from local sources – the flour, water and salt. The Udon shops in Kagawa take Udon very seriously and they make their own Udon. None of those factory produced nonsense.

During my trip to Kagawa, I had the honour to learn from noodle master Nobushika Higashida the technique of making Udon. It was actually very simple, no fancy ingredients or equipment needed, but requires practice to get the hang of! 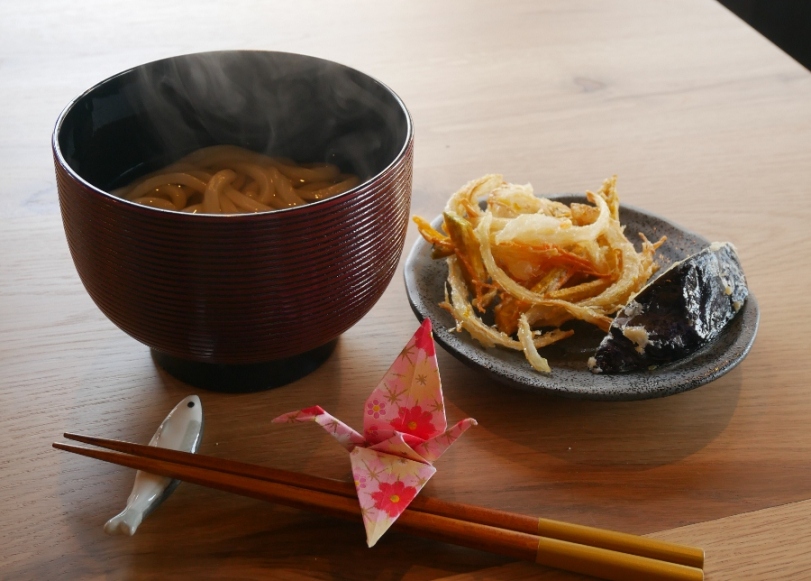 During the session they gave us a bowl of Udon made by the noodle master and that, was the best Udon in my life. Just Udon in dashi stock, and Kakiage tempura on the side. It was so delicious.

So when we finally cooked the noodles we made ourselves, I was surprised that, hey, it’s good too! Of course, the Udon master’s version is better somehow, but my own handmade Udon already tastes better than every other Udon I’ve had all my life. I’m convinced that it has to be handmade, and cooked while fresh. Those precooked ones you get from supermarkets cannot make it.

The withdrawal symptoms were real, so I took to looking for Udon restaurants in Singapore. By that, I mean restaurants that really specialises in Udon. At least they would make their own Udon rather than use factory produced sort I guess? We do not have many of such shops in Singapore due to the non-popularity of Udon (our people don’t know what they’re missing out on urgh…) but I managed to find a few.

Marugame is the name of a city in Kagawa Prefecture, and the Marugame Seimen chain of Udon restaurants that has shops all over Japan and also expanded internationally. We have 1 shop in ION Orchard Singapore. This is probably the most well known Sanuki Udon chain based on number of outlets and this was the first Udon restaurant I tried for my quest.

They make their Udon in store for every of their stores, sticking true to what an Udon restaurant should be doing. 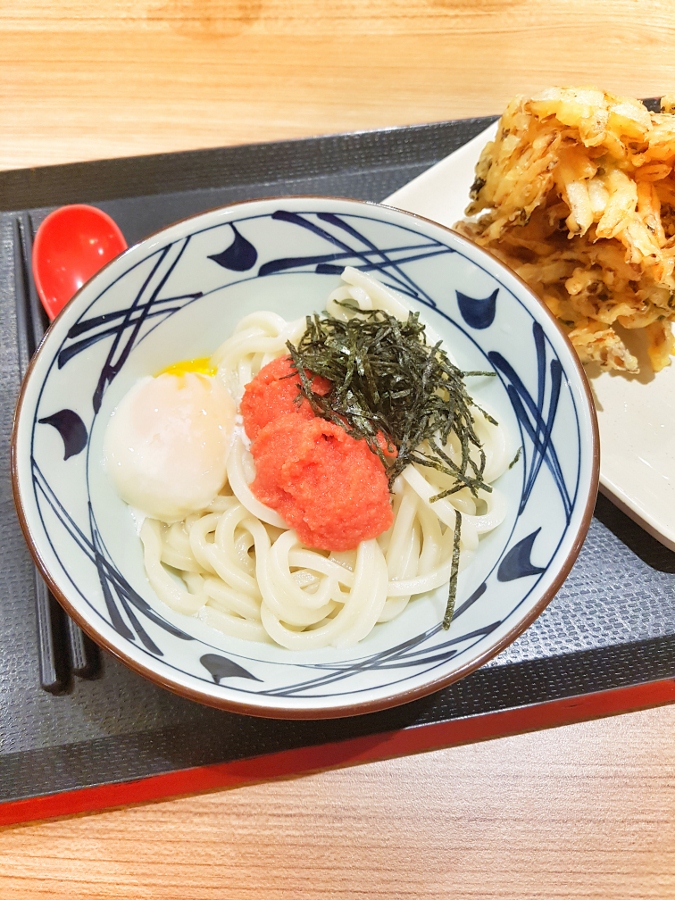 I chose the Mentaiko & onsen egg udon ($11.90) because I love Mentaiko. I selected Kakiage ($2.50) on the side for reminiscent of what I had in Kagawa.

The Udon was good, probably better than any of my previous Udon experiences in Singapore, but not quite as good as the Udon I had in Kagawa (yes, I am saying even the Udon that I made myself was better! No shame haha). The texture wasn’t as bouncy, basically.

The Kakiage was way too oily, wasn’t very crispy and something I wouldn’t have again.

This shop is located in B2 of Takashimaya Food Hall. Now for the past 2 years I’ve been a regular at Takashimaya because my yoga studio is here, and so is my gym and ABC Cooking, so I come to Takashimaya more than once a week typically. However, I’ve never tried this casual restaurant before despite taking my lunch in Takashimaya really often! In fact, it never really registered in my head that this was an Udon restaurant. As mentioned in the start of this post, I was never a fan of Udon, hence I think I wasn’t motivated to try it. But now that I am a convert, I started noticing it’s existence.

I think this place doesn’t specialise in Sanuki Udon judging from the menu, and I think they just serve generic Udon tweaked for Singaporean taste buds.

They do not have Mentaiko udon here, so I just chose to have plain udon in dashi stock with Kakiage on the side ($9.90) and an additional onsen egg ($1). The Kakiage had shrimp inside, but overall was kind of too oily as well. Suddenly it seems to difficult to find decent Kakiage in Singapore?

The Udon itself was alright, but the dashi stock no where near the standards of the one served at Udon House in Kagawa.

If I were to ever dine here again, it would be purely out of convenience as Takashimaya is a place I go to often, but never because this is anything worth coming all the way for.

Tamoya Udon is probably the oldest one around in Singapore which specifically serves Sanuki Udon. I’ve seen this restaurant in Liang Court for the longest time, but never thought of trying it because choices of good Japanese food in Liang Court are too numerous. Unlike most of the casual Japanese restaurants which are located in the basement, this shop is oddly located on Level 1, away from the cluster of other restaurants. The location is something you could easily miss out when looking for food in Liang Court.

Having stood the test of time, I had a feeling that this one would not disappoint.

I chose to have the triple egg egg udon (mentaiko, tobiko & onsen egg) ($9.80) with a side of kakiage ($1.80). And yes, among the 3 Udon shops I think this was better! The texture was better, but still not as good as what I made myself in Kagawa. I think the difference lies in the process – here they use machines, but in Kagawa we did it entirely by hand (and foot). The release of gluten is what makes the difference in texture, and I guess there will be a difference between pure handmade and machine assisted Udon. It is too much to expect for them to hand make Udon as it will be laborious, but I’m glad they actually have the Udon making machines on site in the restaurants so diners can look at their Udon being made.

On the other hand, the kakiage was also too oily (really, can’t anyone get it right?) and I will probably not order it again.

That said, this is my favourite Udon shop in Singapore so far and I will come back again, specially for Udon.

P.S. I think most people will not understand how I feel about Udon, like you may be wondering what’s the big deal, unless you’ve tried the real Sanuki Udon in Kagawa. It is really that good. I kept thinking about it when I came home from Kagawa, and that’s coming from a person who never really liked Udon before that eventful trip!

If you’re looking for a destination in Japan to visit, do consider Kagawa and have your perspective of Udon revolutionized forever! Check out my Kagawa travel posts to learn more about Kagawa “Udon” Prefecture.

2 thoughts on “Udon in Singapore”