Last Saturday, I attended a class by Commune Kitchen under their invitation. Commune Kitchen is a provider of cooking lessons, held at OUE Social Kitchen, taught by Chef Payal. Chef Payal has lived in China for a while and has brought back the technique of making Chinese dumplings and Xiao Long Bao, which she teaches in her classes at Commune Kitchen. Other than Xiao Long Bao and dumplings, she also teaches other cuisines like Thai, Middle Eastern or Indian butter chicken, including variants for dietary requirements like vegan or gluten free. I decided on attending the Xiao Long Bao lesson because I love Xiao Long Bao! I’ve always assumed the process to the tedious and intimidating so I never thought I’ll actually make it myself one day!

The class was conducted in a group setting. At Commune Kitchen, the classes can take up to 30 pax for events booking but a public cooking class will cap at 16 pax, and will commence even if there is less than the maximum capacity. The class started with demo by Chef Payal, and then we headed back to work on our own. 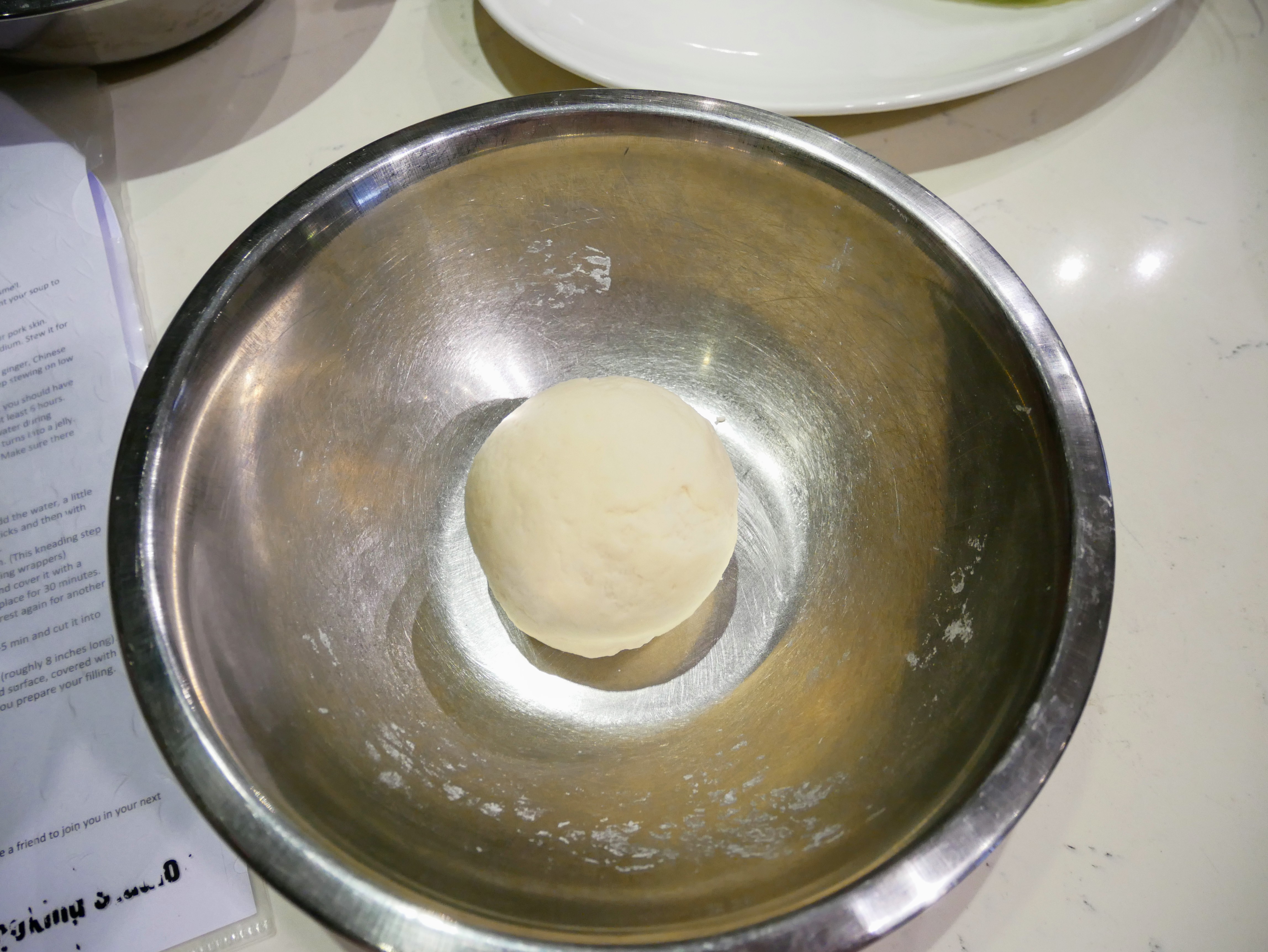 The first step was to make the dough because it needed to rest for around 30 minutes before using. Each of us made our own individual dough from flour, salt and water. 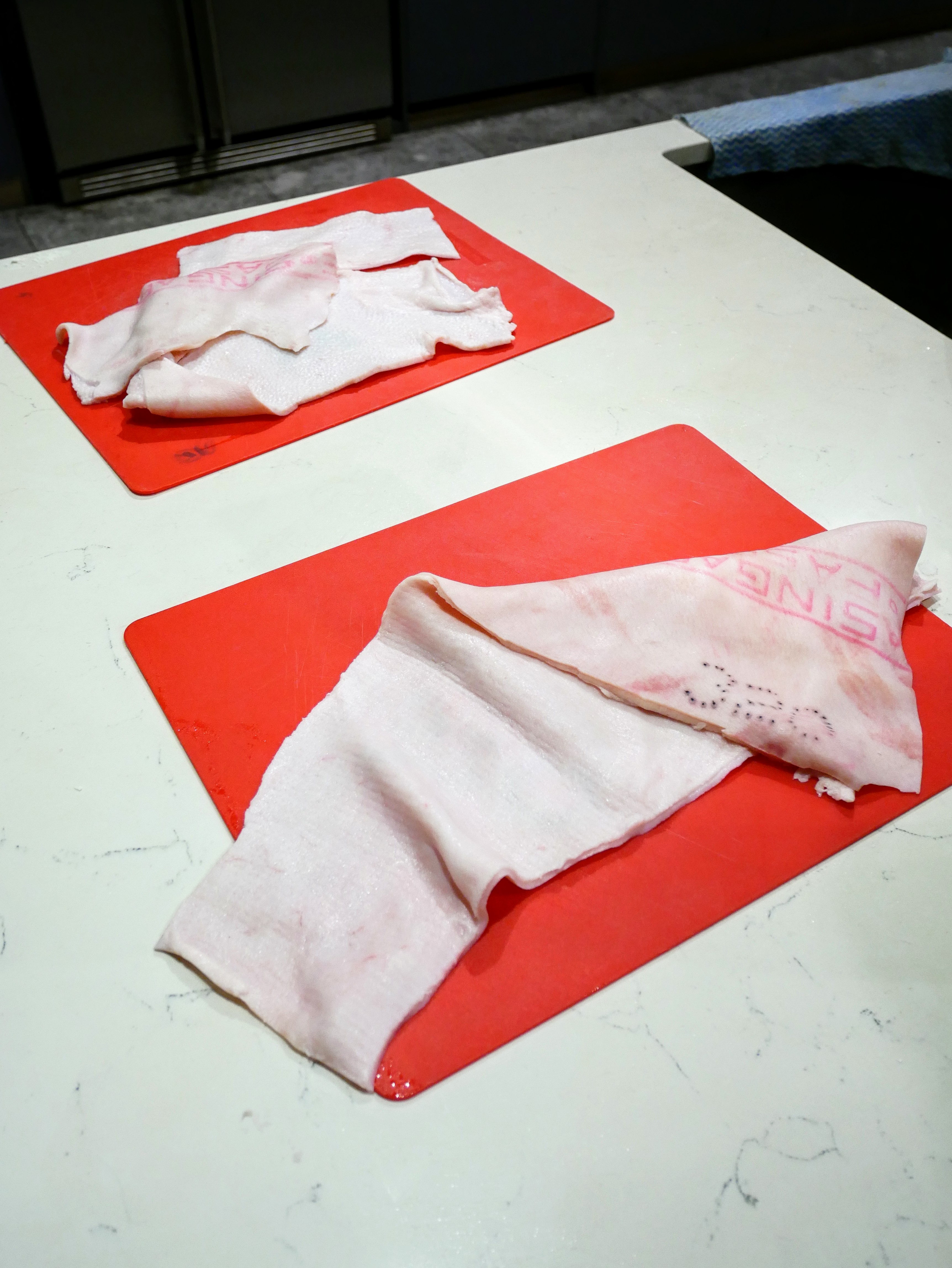 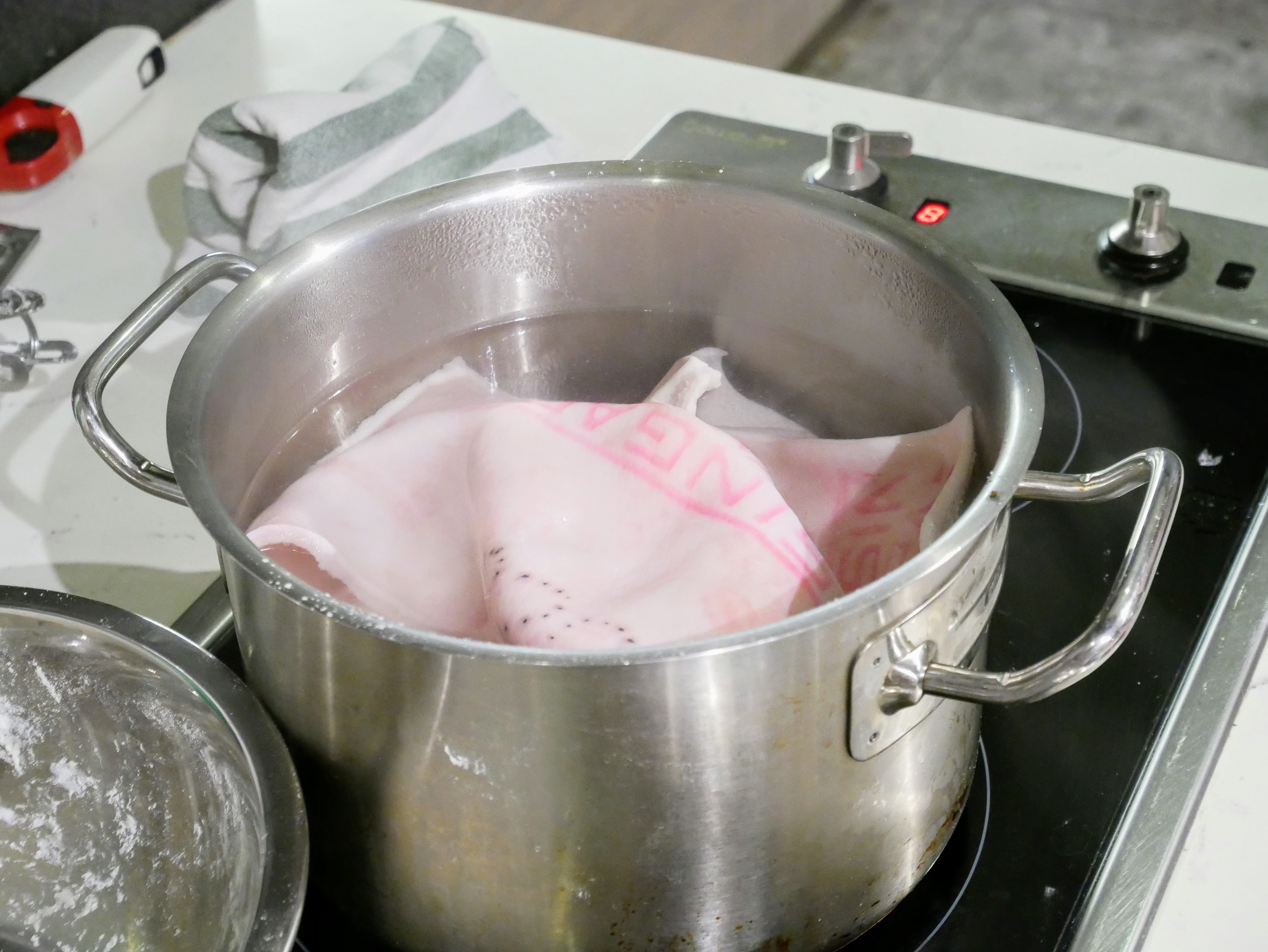 While the dough was resting, Chef Payal demonstrated how to make the pork jelly. If you don’t already know, the soup inside each Xiao Long Bao is actually made from pork jelly which is solid at room temperature but melts into a broth when steamed!

The broth solidifies naturally due to the collagen extracted from the pork skin. This broth takes more than 2 hours to cook and 6 hours to set into jelly, so it was prepared for us ahead of this class. However, she provided a fresh set of pork skin to show us the steps towards making this pork jelly and interested participants could try hands on in the process if they wanted to. I was satisfied with just watching for this step. 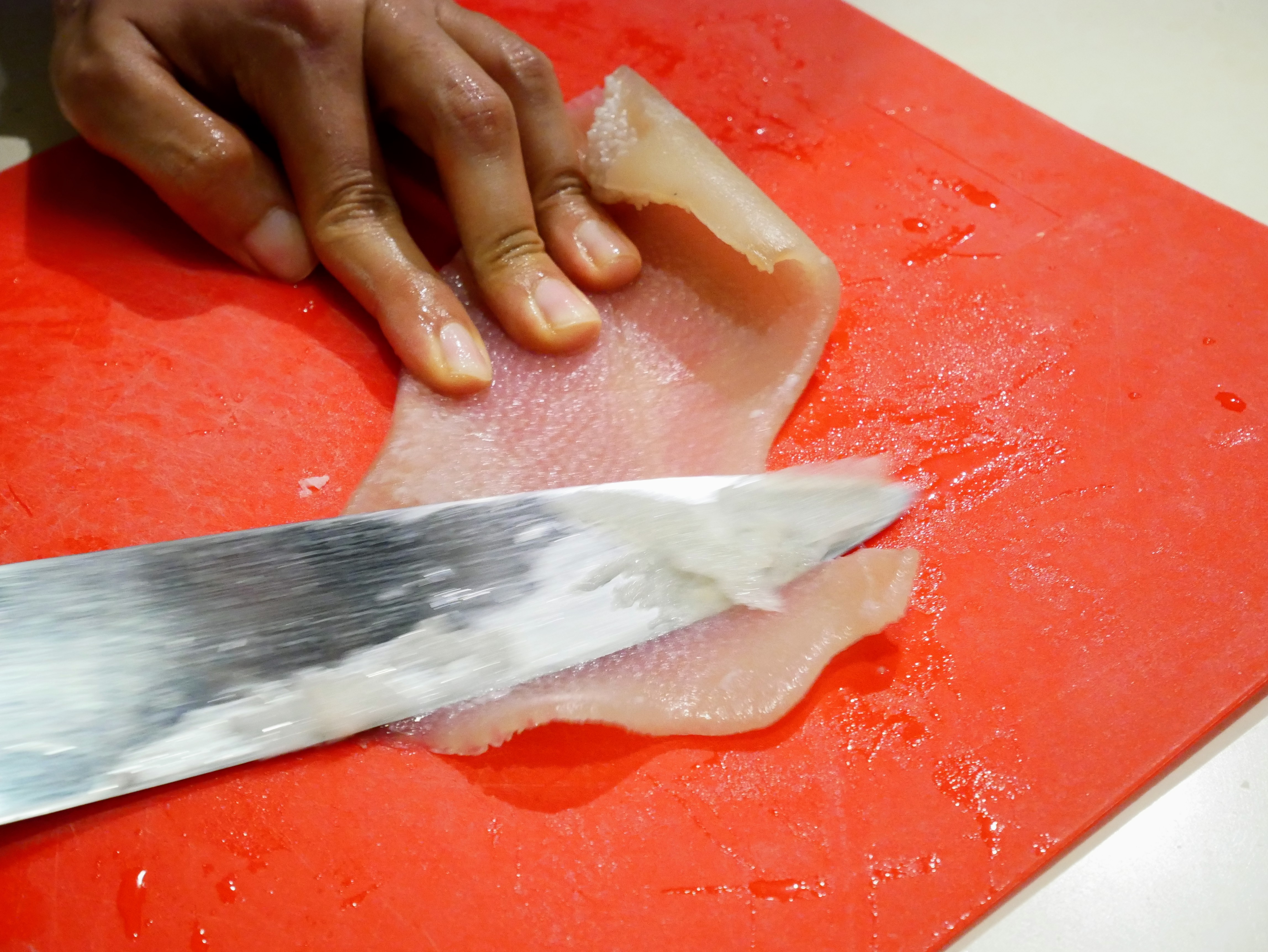 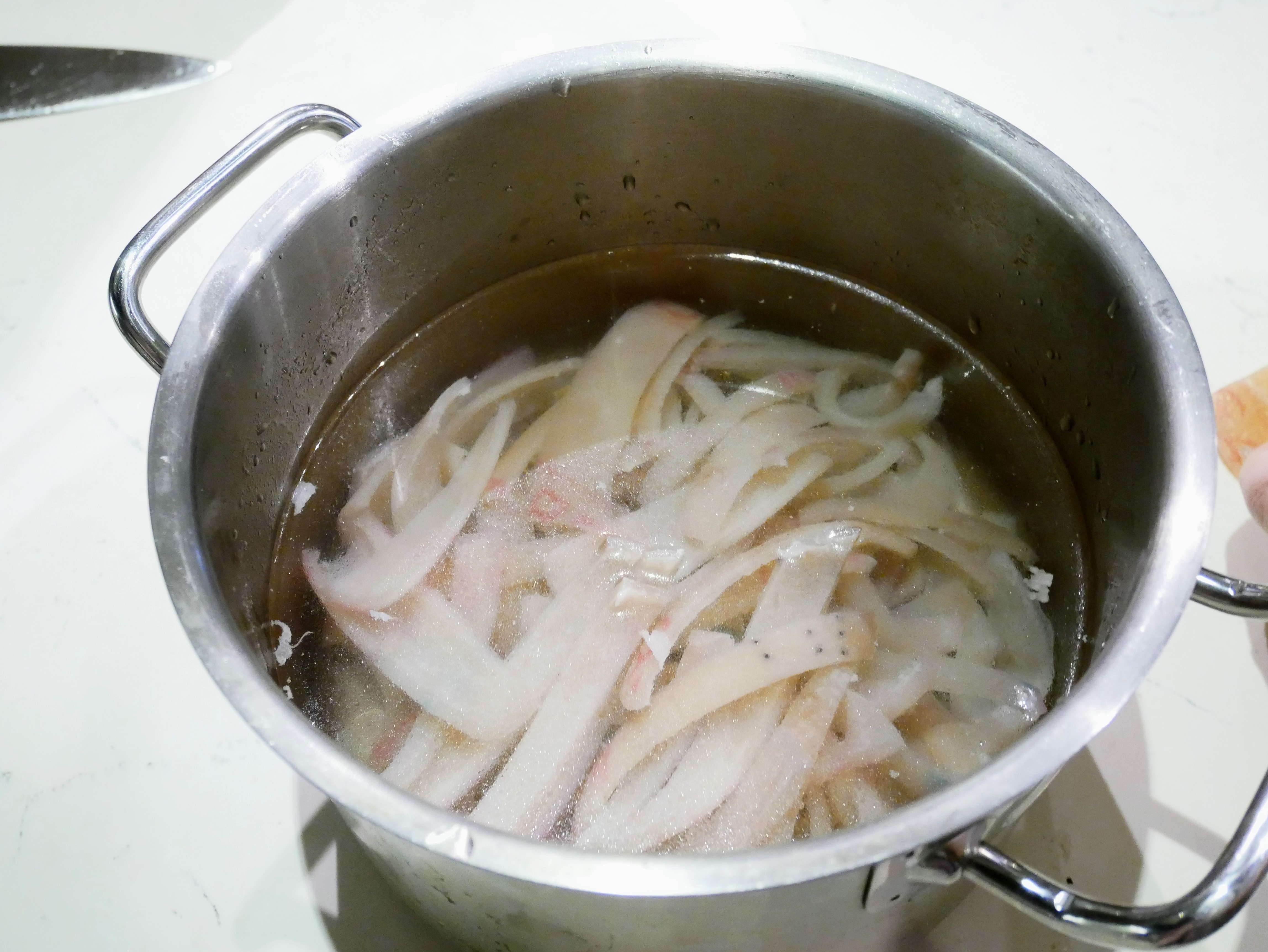 Firstly the skin was blanched as a whole piece for 5 mins to remove excess fat. Next we had to manually scrape off the fat with a knife. If the pork skin was “good”, there would be minimal fat to scrape. However if you get a very fatty piece of skin, this scraping step could take up a lot of time, up to an hour!

The pork skin was then cut into strips and boiled for an hour, before aromatic ingredients and seasoning was added in and it continued to boil for another hour. After that is done, the soup was strained with a colander and left to chill in the fridge. Chilling long enough is important because it has to be jellified in order to be wrapped into the dumplings! 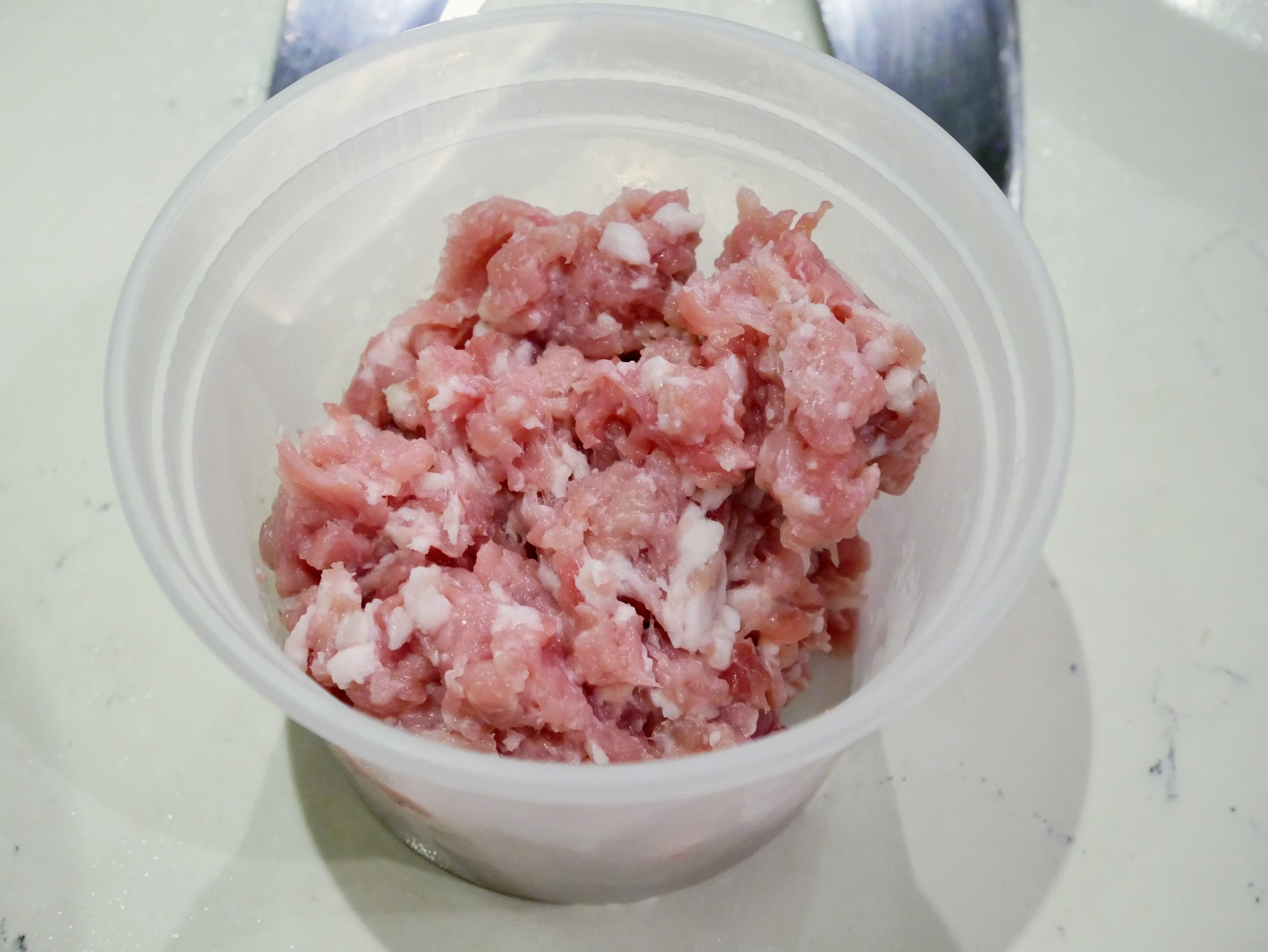 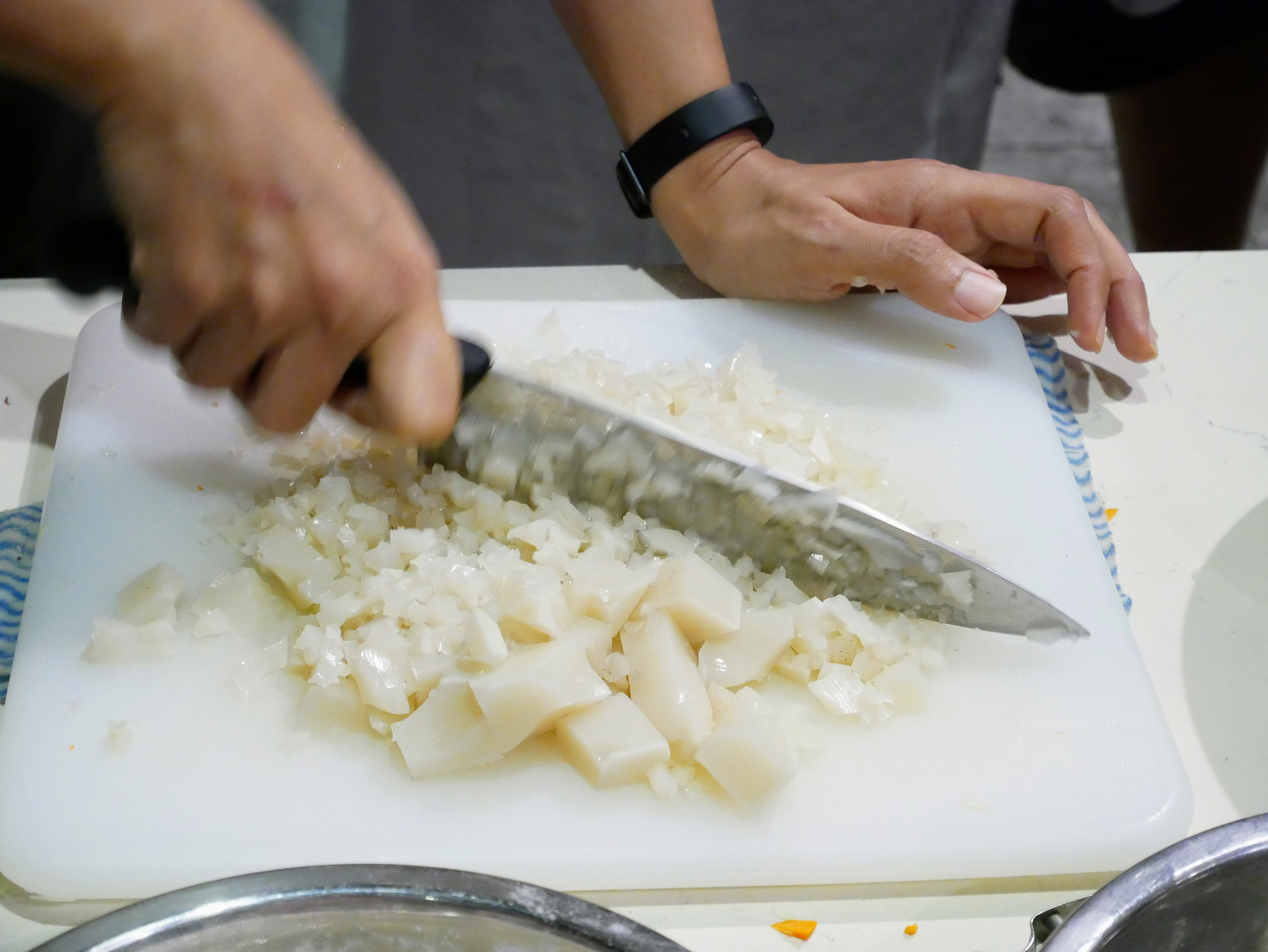 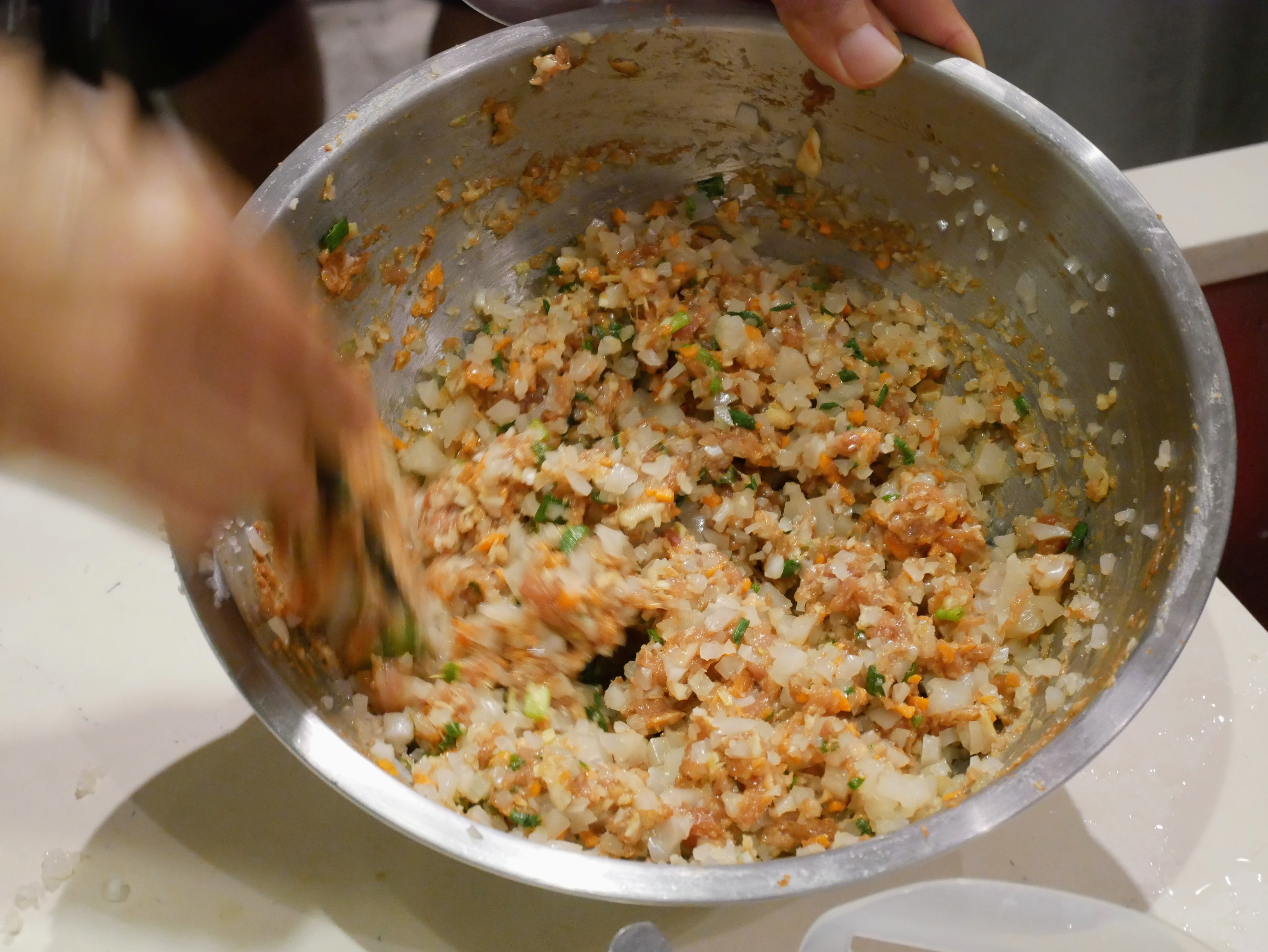 Next up was the pork filling – it was of course, made with pork. I’ve tried Chicken Xiao Long Bao in Din Tai Fung Dubai before and I’ll just say that it tastes so different. For delicious pork filling, you need to use pork with a certain amount of fat as advised by Chef Payal. For this recipe, she added cabbage and carrots into the mixture, on top of just the seasoning ingredients. After the demo, we headed back to the table and started making this filling in groups of 4 people. Each group was given a pre-made pork jelly to be added into the minced pork filling. 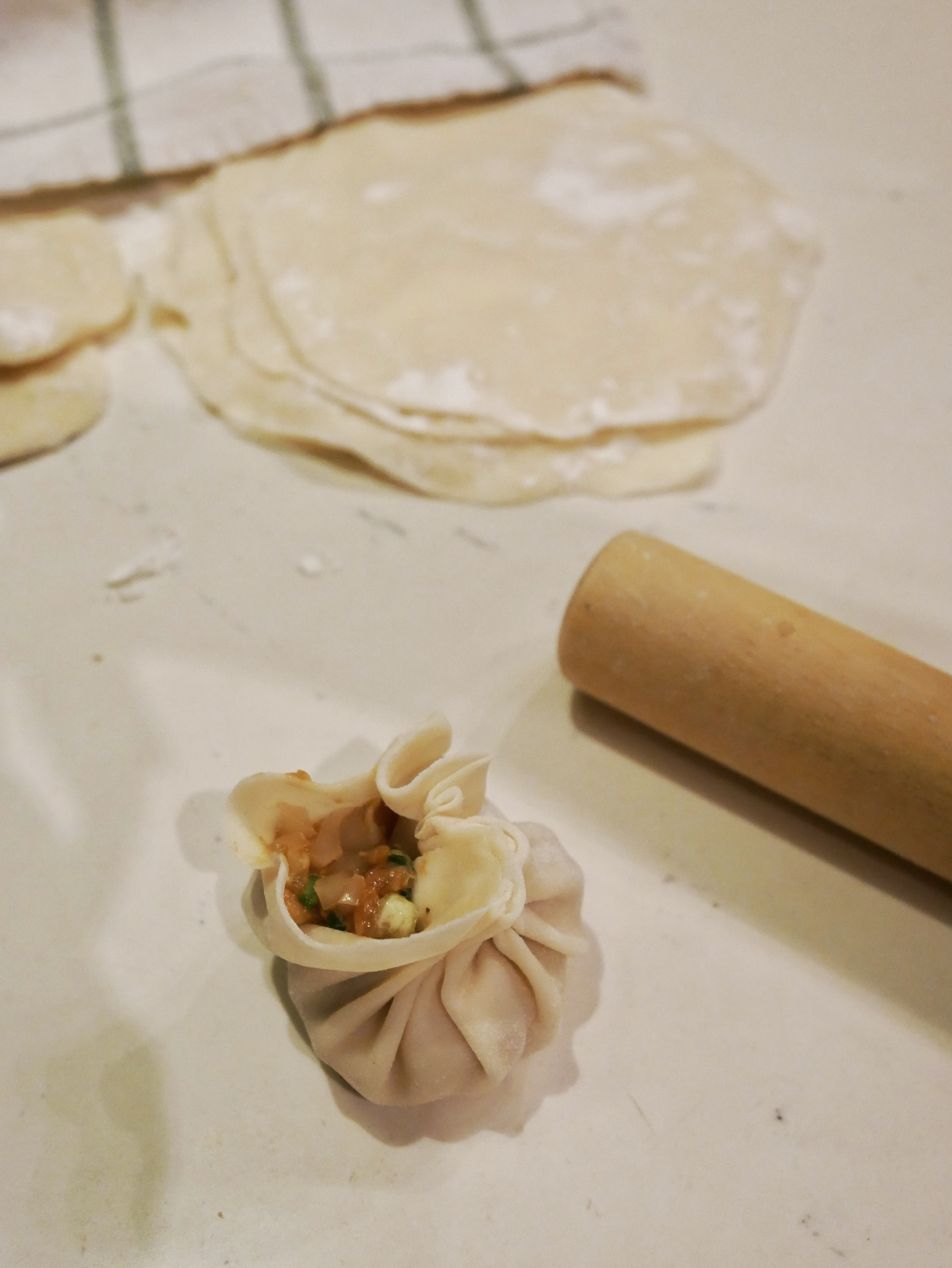 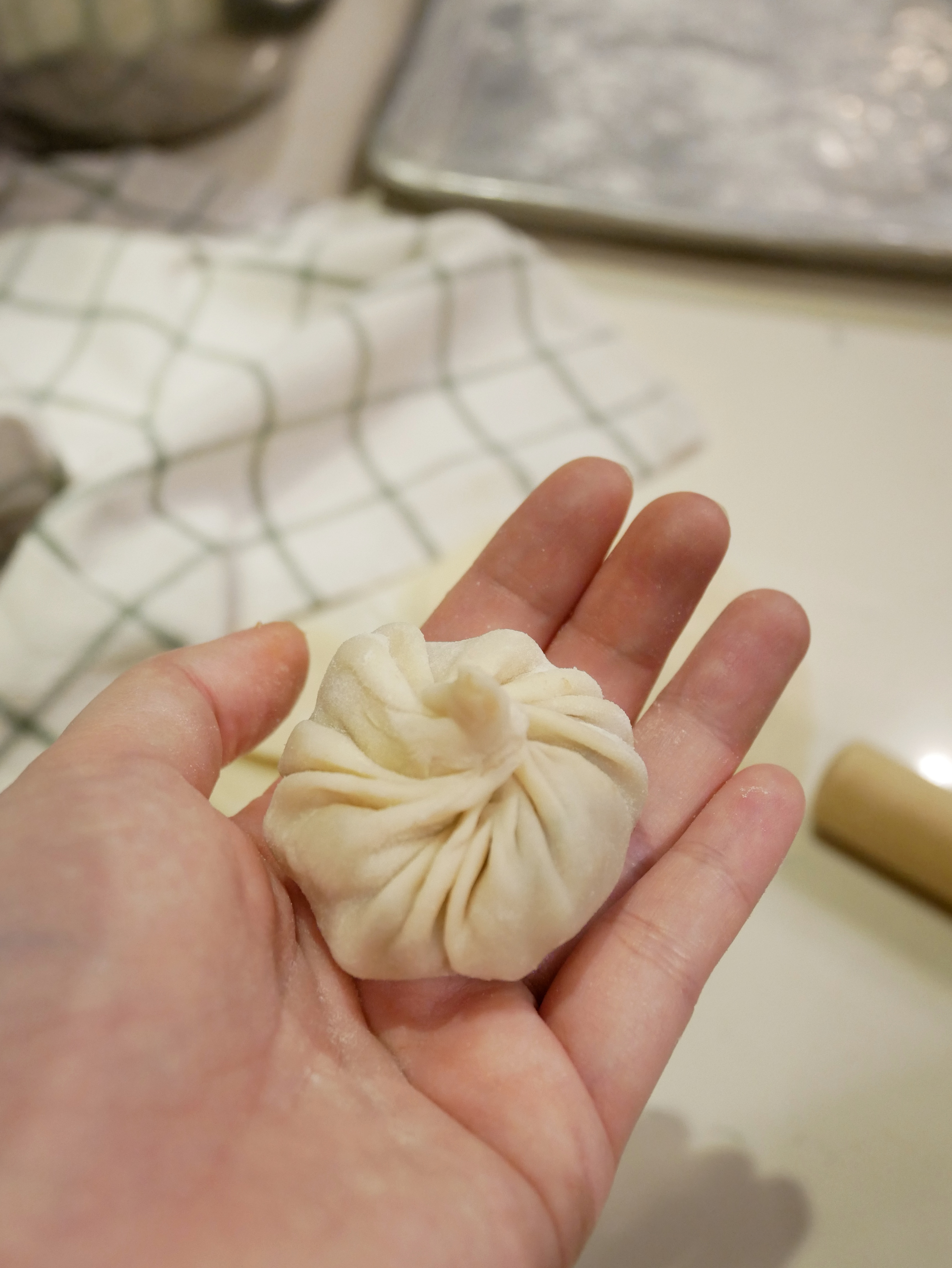 Next step was to roll out the Xiao Long Bao skin from the dough. It wasn’t very easy but Chef Payal showed us 2 methods from and we could choose which one we preferred. The fun part was to start wrapping it up! Again, it was tricky at first but when I got the hang of it I could do it much faster and confidently. I think it takes a lot of practice to do it like clockwork, like how the Din Tai Fung chefs do it. For this part you could choose to separate your dough from others if you want to to keep track of the ones you made yourself. If you prefer to work as a group you could also split up the tasks or rolling the skin and wrapping it up among yourselves. 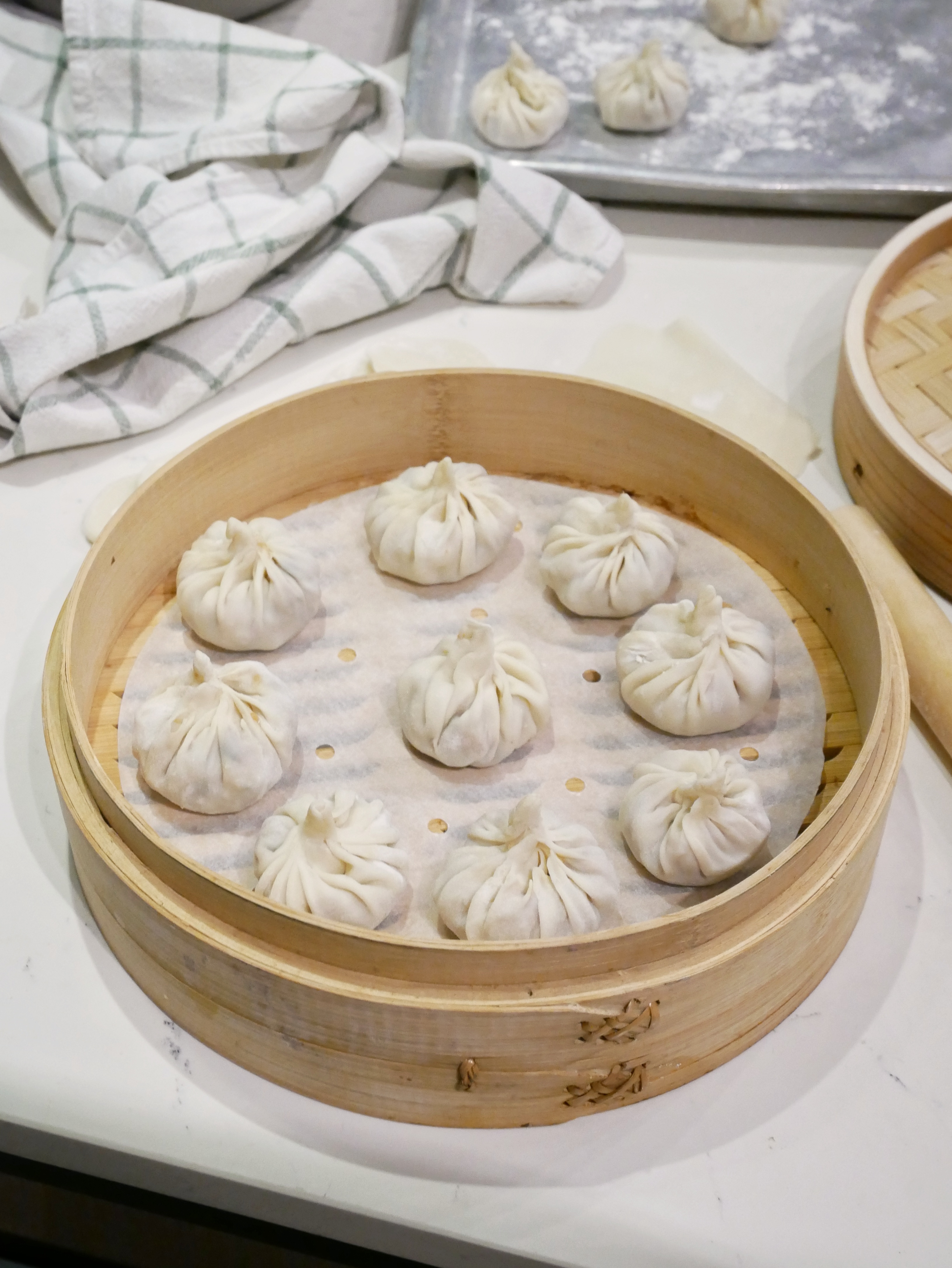 The Xiao Long Baos were steamed in bamboo steamer baskets, the authentic way. This basket of Xiao Long Bao were all mine! 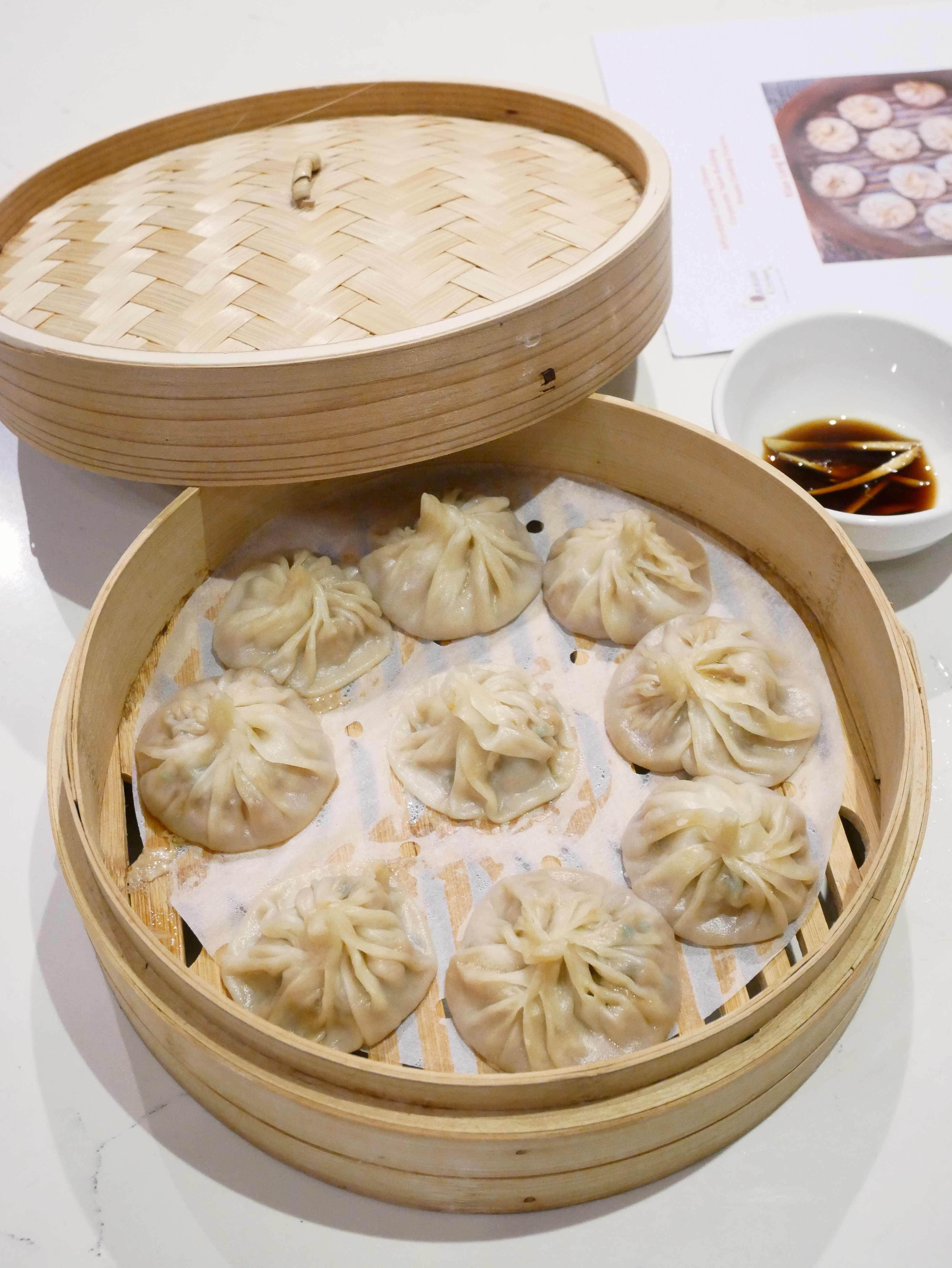 And here’s the final look! Obviously my product is no where near Din Tai Fung’s perfect standards. But probably on par with hawker center Xiao Long Bao I guess? I guess I have to work on the the size and thickness of the skin and the wrapping to make it better aesthetically. 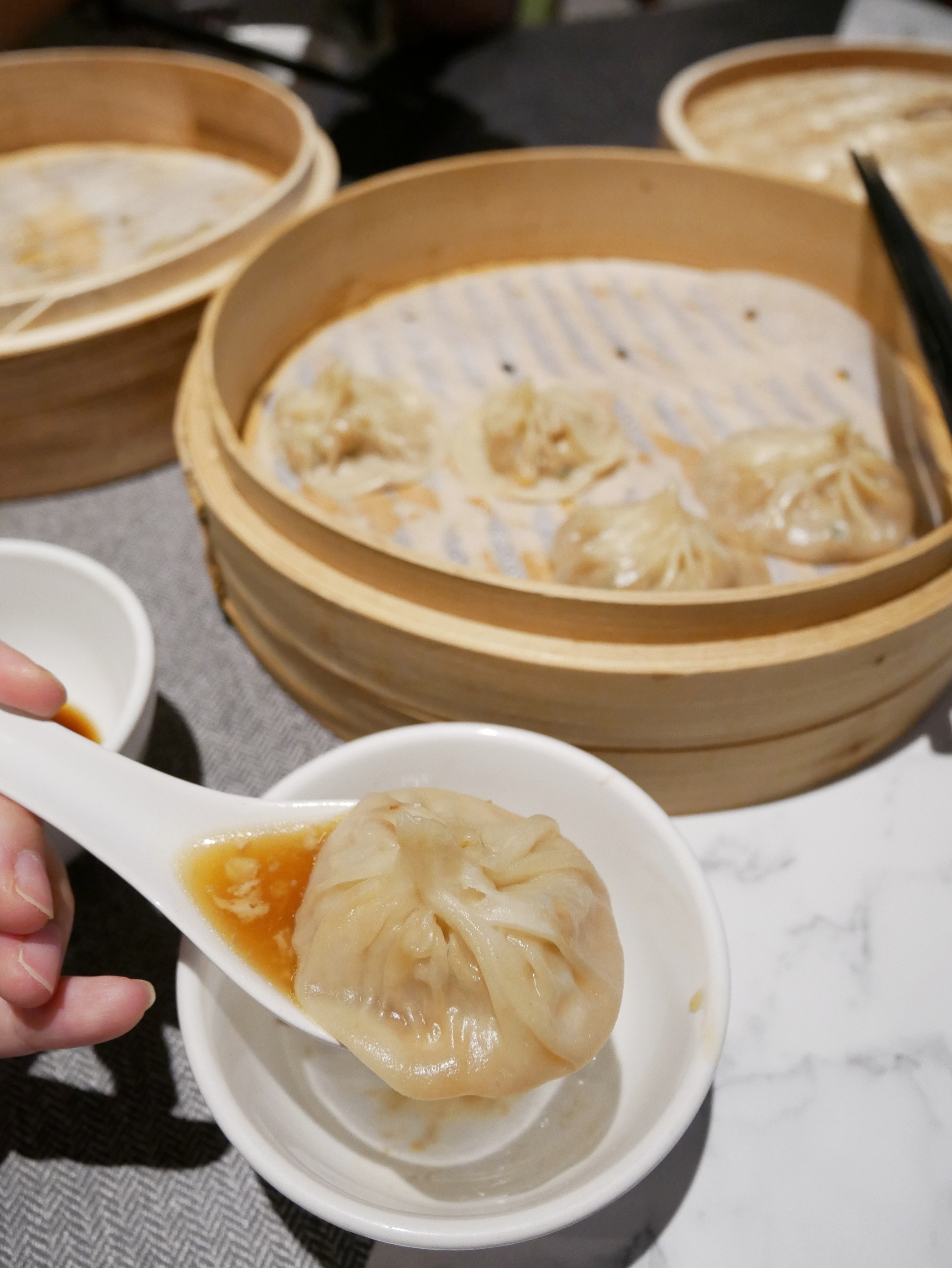 Taste wise, the Xiao Long Baos were full of broth as anticipated! This recipe does deliver the basic expectations of Xiao Long Bao and it is amazing that we all succeeded to get it on our first attempt under the guidance of Chef Payal. This is not a easy recipe and I think many who tried making it for the first time at home would not find success. On the other hand, I found that it did not taste like Din Tai Fung’s Xiao Long Bao, probably because of the choice of ingredients. This recipe does serve as a guide and you could always modify the ingredients to suit your preferred taste! I already have an idea of how I would tweak it should I make it at home next time.

Overall I felt that for this class it would be more enjoyable if you come with your friends, because certain parts of this class requires you to work in groups of 3 or 4 people. I am not sure about you, but for me, I prefer not to share my work with strangers because I like the cooking session to be a personal project rather than just preparing a meal like a production line. I got to attend this with a friend thanks to the kind invitation of Commune Kitchen which made my experience more enjoyable than attending it solo. On the other hand, I think this would be perfect for team building events or private group bookings where you will be cooking together with people you know and get to bond over the session. At Commune Kitchen they do hold team building corporate sessions, so do get in touch with them if you are interested.

*This is an invited session but all opinions are my own*