I’ve heard about Le Saint Julien being a top notch French restaurant, so when it participated in Restaurant Week, I had to try it.

We were seated at an isolated corner of the restaurant and the view we got wasn’t that of a bay, but of a walkway. It was filled with different groups of tourists, as observed throughout the hour long meal. 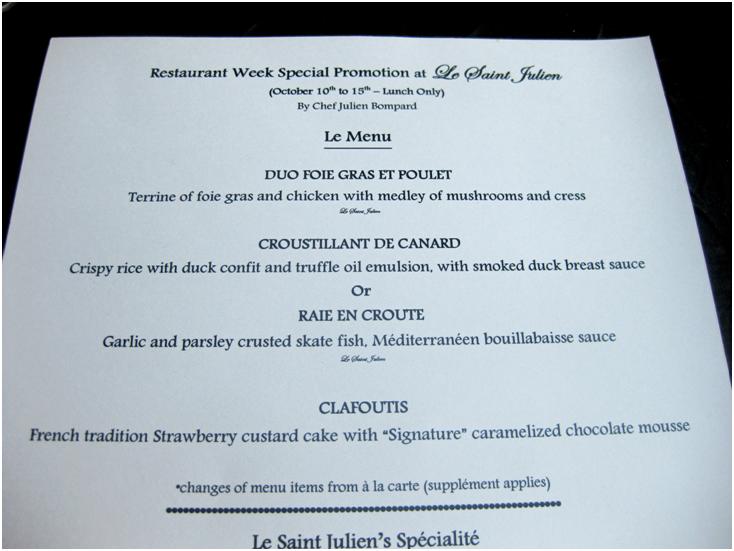 The bread wasn’t too impressive. It was just the typical.

Terrine of foie gras and chicken

Medley of mushrooms and celery cress 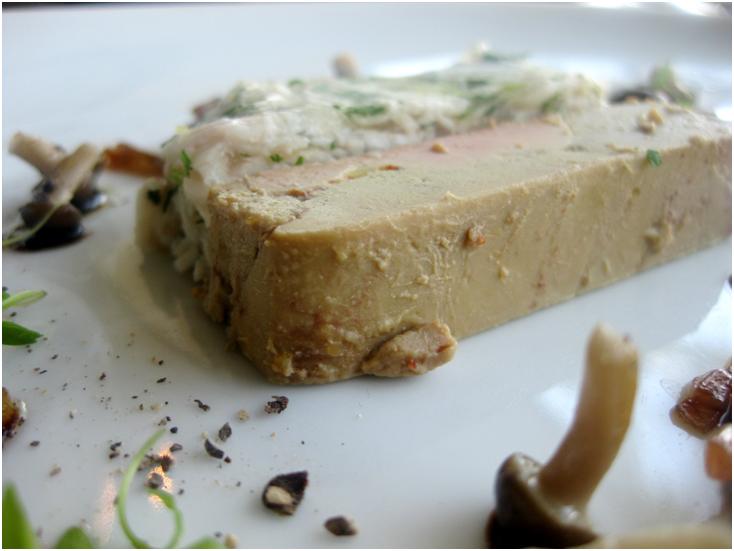 We were told that we could pair the foie gras and chicken terrine with the bread. Indeed, it tasted better than butter on bread. The fatty taste of foie gras was mild in this terrine and obviously will be better if the whole liver was pan seared instead of being made into terrine. However, the taste of it was good enough to make it the best among the 3 courses.

We ordered this ala carte too. The mashed potato, served in a cute little cocotte, was easily the best mashed potato we ever had. It was very smooth and creamy.

My dining partner had this. This looked promising but he claimed it wasn’t that good. 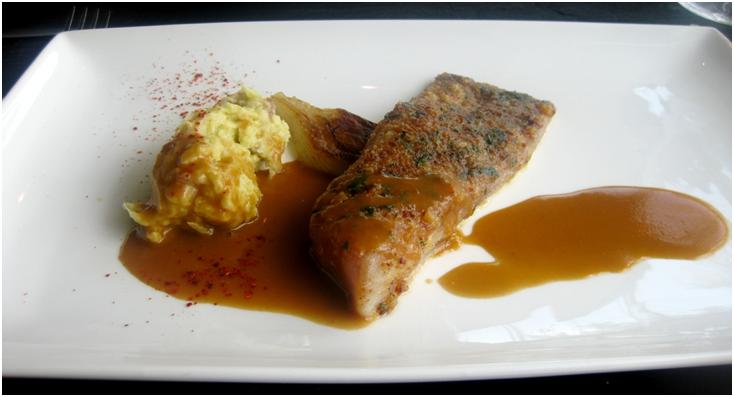 This was my main course. Both the duck and the skate fish are on the normal set lunch menu too, by the way. The texture of the skate fish is similar to that of stingray, except that it has no bones. Generally there’s nothing wrong with this fish, but it’s just that this isn’t my preferred sort of fish. The parsley wasn’t gross (I usually hate parsley) as the taste was mild. The taste of garlic was strong though. The mash at the side contains bacon and the whole thing tastes like bacon. I preferred the mash potato in the cocotte.

Sadly, this dessert didn’t impress me at all. I’m usually most easily impressed by desserts but somehow, none of the desserts I’ve had during restaurant week stood out.

One MAJOR gripe that ruined my experience was the incompetent staff. It’s located at a rather obscure location – Fullerton Waterboat House. Trust me, it’s more obscure than it sounds.

I had difficulty locating Fullerton Waterboat House so I called up to check where it’s near.

I asked the staff:

“is it near Fullerton Hotel?”

“then is it near Fullerton BAY hotel?”

“so it’s in Fullerton Bay Hotel?”

So I went ahead to park near Fullerton Bay Hotel. And then the same person called up as I was late for my reservation. I told her I’m trying to find the place and I’m at Fullerton BAY Hotel. She told me it’s just across the road. I asked:

“so it’s opposite Fullerton Bay Hotel?”

I repeated my question and she said a “yes”

It turns out, it’s totally NOT near Fullerton Bay Hotel but it’s next to Fullerton Hotel! It’s directly opposite One Fullerton. I had to walk some 700m to get there. And back.

Other than the incompetent reception staff, the servers weren’t exactly providing good service either. We were seated at a rather isolated end of the restaurant and it was hard to get their attention. Some of them weren’t warm or friendly.

The food failed to impress too, based on the hype of this restaurant. I guess a revisit is unlikely.

Overall: not that bad a French restaurant but based on the hype over this restaurant I thought I could expect better. The mash potatoes were the best, however.