I had sushi cravings but didn’t want a hole in my pocket, so I decided to try this restaurant. For DBS or POSB card holders, there’s 20% off the ala carte menu.

I didn’t really have much expectation for it.

Overall, I found the fish to be alright, not the freshest like Shinji of course but not smelly at least, but the rice was not quite right. The grains were like normal thai rice we have and it wasn’t well seasoned. It didn’t adhere together well too.

I would say hotate is prone to smelling weird when raw but this hotate actually didn’t have that tendency so that’s good. I requested my salmon to be done aburi so I can’t judge it like I judge raw fish. Aburi salmon always tastes good to me. I also liked the unagi, which was very flavourful and wasn’t slimey at all. In fact, I’d say this unagi could be almost comparable with my favorite anago sushi from Aoki. What was more memorable here was the white tuna. It was very tender and soft and could potentially be my next favourite sashimi.

I’d say the fish was just like any other Japanese restaurant, passable, but nothing unique, like as though they got it from a usual Japanese food supplier and not through importing their own fish from Japan, which I suppose is the usual practise anyway for restaurants of similar genre. It’s just enough to settle raw fish cravings. I would have rated this 4/5 if not for the maki and miso soup. 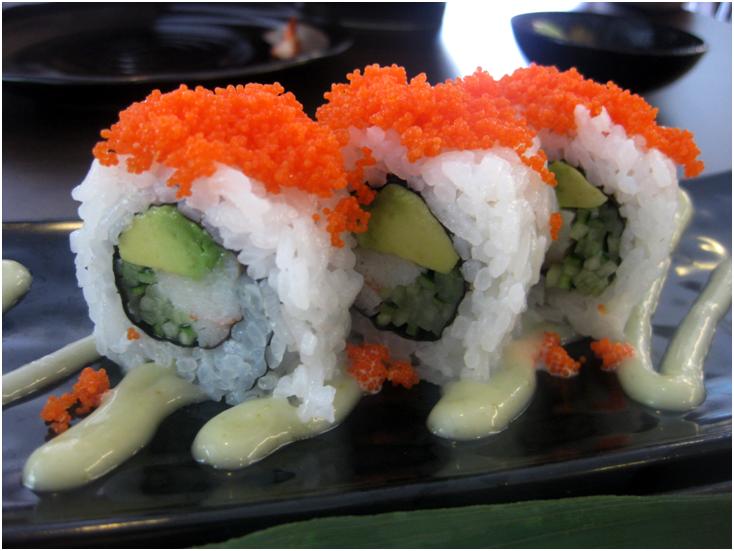 The maki was nothing worth mentioning at all, as the combination of ingredients didn’t seem very appealing with crabstick. The roe looks very unappealing too.

The miso soup was very very normal, nothing special.

The service was very raw too. The waitresses taking my order didn’t seem to understand their job well. On the menu this set didn’t explain what type of sushi there was, so I simply asked her “what kind of sushi does this set have?” and for that, she called another waitress over. The other waitress just said it’s fixed and I can’t choose. Then I was like, “what if there’s something I can’t take?”, and she responded saying “still cannot choose”. In the first place, I just wanted to know what type of sushi there was and the way they answered me was as if this was a surprise set where I’m not allowed to know what I’m going to get until it was served. When they finally got the idea, they called for the chef to explain (he was standing around all the time, not busy at all).

I find this to be severely overpriced, as for this price, you could get the bara-chirashi don from Aoki. For something similar, you could get it at Chikuwa Tei for $25 and they’ll give you sea urchin too.

My dining partner commented that the fish wasn’t the freshest so yes, it’s overpriced.

The soft shell crab was poorly fried, and the unfresh oil taste was very strong. The rice wasn’t good either, and they used too much rice. It was very poor.

Overall, I wouldn’t recommend this place if you want to taste good Japanese food, but if you simply want to settle a meal with sushi, I guess this is acceptable. For $16.90 after 20% off including taxes, you could get a sushi set like mine

Overall: definitely not the best and I wouldn’t recommend it as it’s inaccessible too. It’s hard to find good sushi under $20 though. For chirashi don, you can get it better at Chikuwa Tei.