In 2010, Singaporean’s favourite dessert, Tau Huay, got revolutionized by the growing popularity of a spin off version – the pudding version. What makes it different from traditional style tau huay (soya bean curd) is that it is prepared cold. Traditional you get tau huay by adding gypsum powder to soya milk and cooking over heat for it to curdle up, but for the newly popular method, carrageenan is used to curdle the soya milk and the pudding forms when it is chilled. The process is like making jelly, just that carrageenan is used instead of the more common gelatine, konnyaku or agar agar.

The difference between the new type and the traditional type is mainly based on preference, attracting different crowds, but ingredient wise, it may differ nutritionally too. The traditional method uses gypsum powder, which may be a concern to the health conscious as there have been reports that it is bad. Carrageenan is a seaweed extract and may be an option for those who are against gypsum.

The stall that got the pudding version popular is Lao Ban and their signature taste is that of coffee mate (creamer). While it can be tasty to some people, others may criticize it for being artificial since it has creamer and stuff.

There are many other competitors selling similar beancurd puddings now, and some of them are really disgusting and merely riding on the popularity of such product (meaning, they do not have any potential on their own. They are merely getting patronage from people who want to have beancurd pudding thinking theirs will be as good as the popular brands, and not attracting customers based on how good they really are). It’ll be a matter of time to when their business will fold.

On the other hand, there is a particular brand that has caught my attention. It’s called Chi Ni Dou Fu. The initial reason for trying was because it was much nearer to me than Lao Ban was. Upon trying, the taste was really not bad. The texture however didn’t quite satisfy me because it wasn’t as soft. However, because it was very near me and I had easy access, I tried it again subsequently, after a few months (if it was far away I would have not bothered to give it a second shot). I am pleased to report that the texture has improved and it is very smooth and soft now. What makes it stand out from the rest is that they focus on being the healthier choice. They use organic soya beans and do not use dairy creamers. The overall taste is not too sweet as well. This suits people who wishes to indulge without too much guilt, or those who dislike the creamer taste.

I must warn you however, that if you love the taste of Lao Ban, you will not like this at all, and even think it is weird (why of course, anything is weird if you have already decided that all beancurd pudding should taste like Lao Ban by default).

They also produce it in various flavours and I have tried almost all of them. Some of them were really good, while some not so. Original cost $1.50 while flavoured ones cost $2.00 each. There is a promotion of buy 10 get 1 free for all flavours (even if you buy 10 original, you can get 1 flavoured one free). 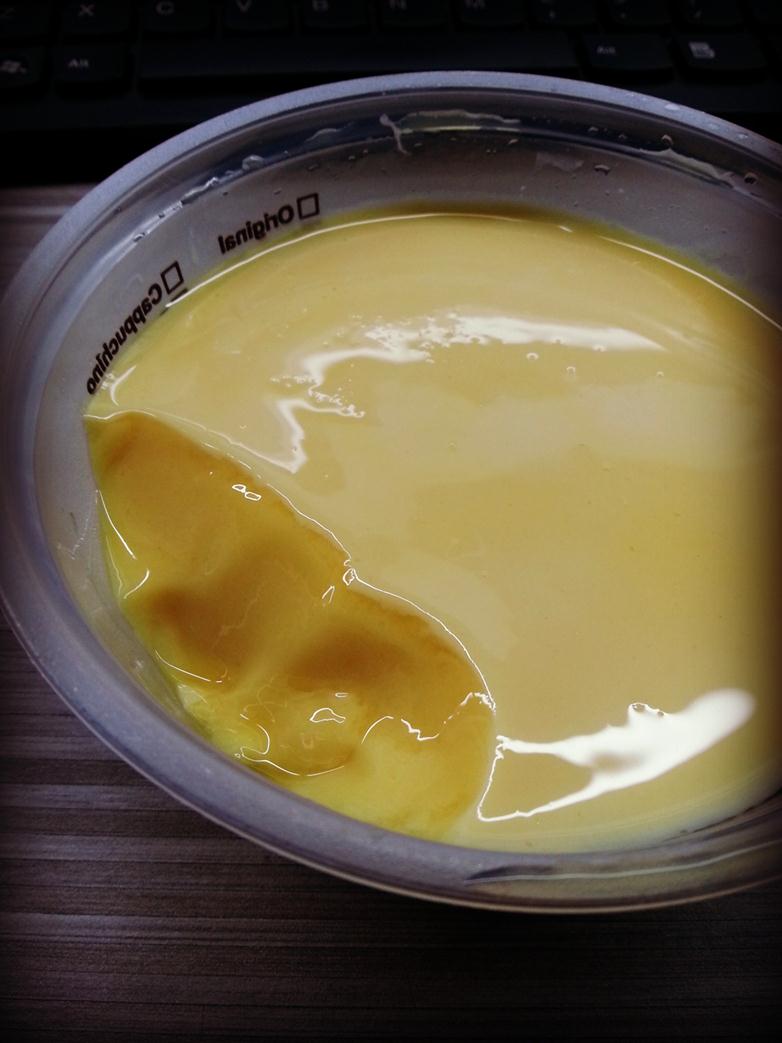 My favourite has to be the mango (as pictured), sweet corn, pandan and original.

The mango is somewhat like mango pudding, just that it has the softest and silkiest texture. It also contains traces of mango flesh in it.

The sweet corn took me by surprise too. I am not an avid fan of corn, but the sweet corn flavour went perfect with the pudding. However, I don’t think that putting corn kernels in the pudding was a good idea because it is not soft in texture and kind of ruined it all.

The pandan did not contain anything else, unlike the above 2. It was perfectly fine that way. The pandan taste was very fragrant.

Lastly, there’s the original one, which has unaltered soya bean taste. It’s perfect the way it is.

For those under the “miss” category, the flavours were simply too artificial tasting. I hope they can improve on these. I’ve tried honeydew soya bean milk from a supermarket brand and it tastes fine, nice in fact, but somehow in this beancurd it didn’t work out too well.

Strawberry is a difficult flavour to create in my opinion, as fresh strawberries may not have much sweet flavour to impart, while artificial flavouring is more than often too artificial tasting. Their version has the latter fault.

Generally, for the flavoured ones you won’t taste much of soya bean so for those who are not a fan of soya bean products, but enjoy having puddings or jelly like desserts, these are for you.