I know how some people are sceptical of Restaurant Week, because some black sheep may provide inferior quality of food and service during Restaurant Week due to the low price, and I too was afraid that this may break my streak of good experiences at this favourite restaurant of mine. However, none of those happened so all was good. Service standards today were really good, despite the restaurant being almost full house. The service was warm, attentive and everything you would expect from a place with good service.

I went for dinner and the $35.00++ set menu comprises of 3 courses. There’s a choice of main course and I like such flexibility.

We ordered this in addition to the set menu. The price for this seems to have increased, but comparing to my previous picture the cheese looks a lot bigger now.

Roasted Octopus with Potatoes and Leeks Puree and Crispy Zucchini

I was half expecting a smaller portion, since some places do that for their sets, but was surprised to realise that everything was in the full size, as it would be if ordered ala carte.

I had this octopus during my previous visit and enjoyed it then. I was happy to see it in the Restaurant Week menu. However, I felt it was better the previous time. Comparing from my previous photo of it, it was more charred last time, so perhaps that’s why. The texture was chewier this time. The accompanying sides like zucchini chips and leek puree was still as good though!

I know in this picture it looks like a small portion, but actually it was quite substantial. Please pardon my poor photography skills and I had to use flash because we were seated in a pretty dark corner. The crabmeat was very tender and they were quite generous with it.

Generally the squid ink pasta here and in the dish above wasn’t too different, with the pasta just as springy and the crabmeat just as tender.

I only had one mouth of the lasagna and it was creamy, cheesy and meaty. I’ve always loved lasagna and it’s been too long since I last had it. My first impression of this was that it made the mark and lasagne lovers can try this.

I’ve this this ravioli before in my previous visit. 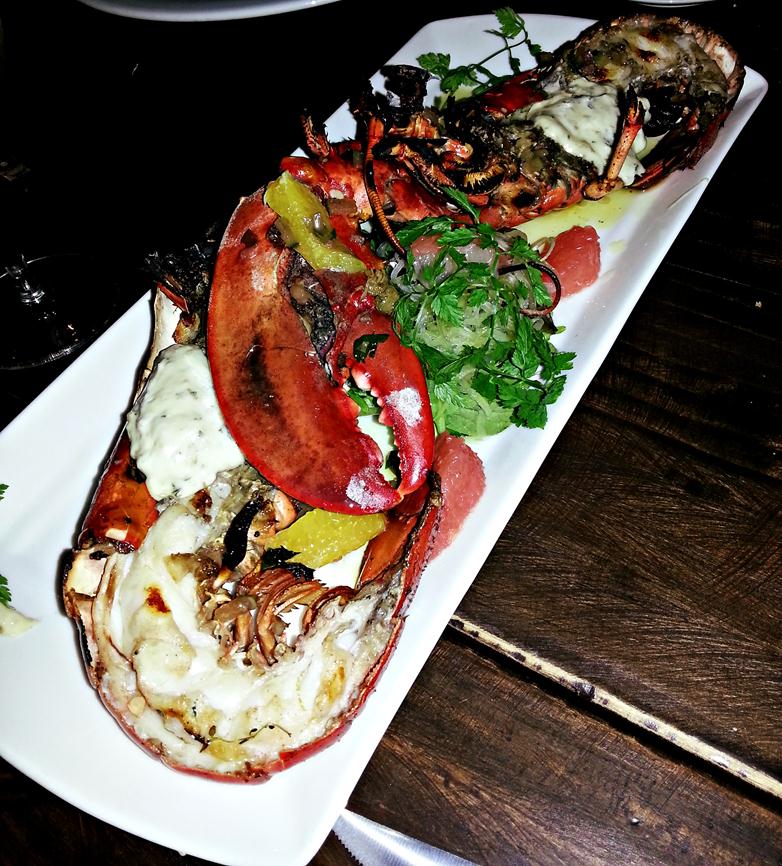 The lobster here was actually one whole lobster with the claws, and not just half the body, or just the tail, like how some places would serve. The meat was fresh and springy, and this was quite a substantial portion as a main. The citrus salad was indeed very citrusy. Not only was the dressing sour, there were also slices of various citrus fruits.

Sirloin is usually not my preferred cut of beef, but since it’s pre-sliced for me I guess its ok since cutting through the chewy meat would be a tedious job. I ordered mine to be medium rare and they did do a good job with the doneness. The flavour was alright, but I guess this was not from any fancy type of cattle (wagyu, aged, etc) hence the meat itself was just like normal steak. I liked the cooking though, with the outsides brown enough but still juicy inside.

The cheese here was fried into sticks, nothing too impressive as it reminded me of the cheese sticks from KFC.

I had this before and it was so good, I was happy to have it again. Chef Marco explained to us that this dessert was like a semifreddo, which is a semi frozen dessert, and is essentially egg white and egg yolk. The insides feel and seem like ice cream, but technically it isn’t. The white goes to the meringue part, while the yolk goes to the filling which seems like ice cream. The yolks are pasteurised by the way, so there’s no worries about raw ingredients here. The slightly sweet meringue cake went perfect with the dark chocolate sauce and chocolate block. I have to warn though that this portion is not small, and it may be a bit too much for a single person to finish, especially if you’ve had your fill with the appetizers and mains.

To end our meal we were given a complimentary small shot glass of coffee parfait. It was like a Starbucks Frappuccino, but much better.

If you’re interested in trying this place for Restaurant Week, you could still try your luck getting reservations! The last day is 23rd March (Saturday) since OTTO Locanda closes on Sunday. You could try watching out for last minute seats if you are unable to find a slot right now. The 3 course dinner was very worth it in my opinion and would recommend giving this place a try!

For more on this place, check out my previous entries: