I had 2 days in Barcelona and the summary of this city is: not that fantastic. I was not even keen on Spain to begin with but my hopes were heightened when everyone I asked told me that Barcelona is a “Must Go”.  It was not terrible, but with so many other destinations in Europe, I don’t think this is the best place. The appeal of Barcelona is probably only for the architecture, but if architecture is not your preferred kind of sight to see, like you don’t really feel impressed enough to do justice to Antoni Gaudí, then there isn’t really any appeal left.

I went to Sagrada Família and Park Güell but probably 5 seconds after taking a look at the facade I was done with it. It doesn’t even look good in photos because of construction going on right in front and there were too many tourists for comfort. Way too many. I guess for sight seeing I’ll prefer natural sights like waterfalls, lakes or mountains.

If it’s not about sight seeing, the next activity on a city trip like that would be shopping and eating, both my favourite activities, but really it could be done better somewhere else. I also did not feel the chirpy high spirits from the city itself as somehow the atmosphere felt more gloomy than NY which I just arrived from.

The best thing about Barcelona is probably the Churros because you can’t find Churros like this in Singapore for non exorbitant price (this is supposed to be as common and accessible as say, curry puff in Singapore). However, I’m sure somewhere else in Spain has better Churros because this did not originate Catalan.

I’ve had churros before in Singapore but none was good enough to make me love churros. They were hard and not light to bite, as though the dough was stale or the oil for frying wasn’t hot enough. It just wasn’t remarkable. I think churros are greatly misrepresented in Singapore because most of the time you see it with Hershey’s chocolate syrup like kind of dip and the churros is coated with cinnamon sugar. I saw none of that in Barcelona.

Churros con Chocolate
This was the first I tried and it was actually the best for the churros component. Churros are only nice when served piping hot, so do expect to wait. If you didn’t have to wait even a minute you should be worried.
The chocolate is always sold separately and it’s called (Spanish) Hot Chocolate. When the word Spanish is not indicated it automatically means that’s what you’re getting. Do not expect the milky sort of chocolate drink – Hot Chocolate refers to a starchy like paste of chocolate, which is very viscous. The taste is not really sweet or chocolately at all. It’s more like chocolate flavoured starch paste than chocolate drink thickened with starch. It probably is designed to be a dip for churros rather than a beverage because I wouldn’t drink this. In fact, for “Churros con Chocolate” in Google Images you would always see churros served with a cup of thick chocolate paste like this. I shall assume this is the traditional was to have churros and dipping in Hershey’s syrup is a complete lie.
Granja M. Viader
Carrer d’en Xuclà, 4-6, 08001 Barcelona, Spain

The second place was also famous for their churros. They even placed it near the shop window so that people can see.

The menu is so extensive with 60 items but a bit too messy. Here they have 3 types of hot chocolate – Spanish, French and Swiss. Since we’re in Spain it’s obvious which I chose.

The churros here was good too, but somehow the first shop was better. The chocolate had a richer chocolate taste this time and I preferred this.

Crema Catalana, since we’re in Catalonia. This is like crème brûlée. It was too sweet for me and I didn’t really like this here.

For the sake of it, I tried churros from an unknown shop randomly to see whether the 2 famous shops were really any better. These churros were too oily and was really less tasty. The chocolate was about the same though. Almost every cafe/ bakery/ general eatery sells churros in Barcelona.

This was from another random place for breakfast. Actually churros was meant to be breakfast food but nowadays people have it all the time. This one looks a lot like You Tiao and it also tasted most like it, among all 4 churros I tried. I personally really preferred the 2 famous shops’ versions. 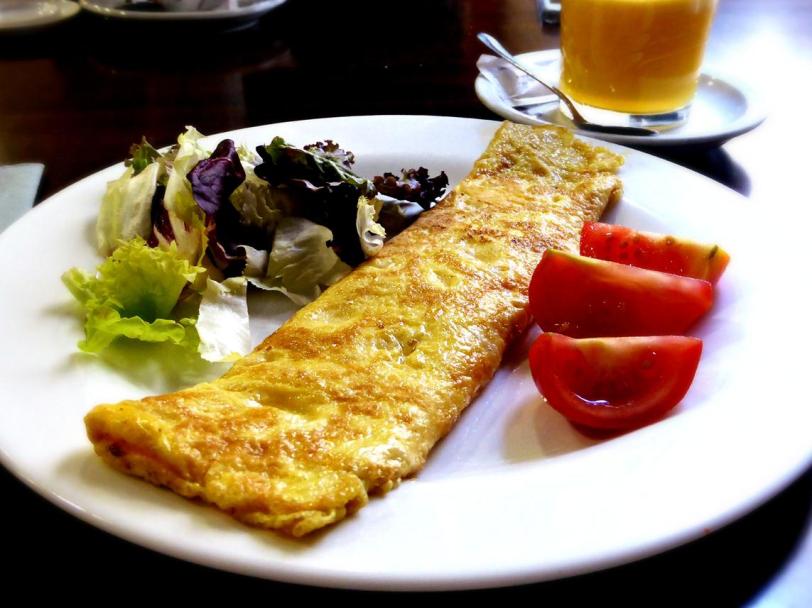 My breakfast omelette looks good though! With fresh tomatoes (European tomatoes are always so good!) and freshly squeezed orange juice.

Other than churros the only other thing I understood from Spanish food was Tapas.

(I don’t mean to stereotype but unfortunately all I knew about Spain was churros and tapas..)

The restaurant I planned to have for dinner was closed for the say due to technical issues, so we just went to a restaurant near the apartment. The food was generally decent at best, and the best

Well, I’ll just say that Belgium has the best mussels and you can’t pin hopes anywhere else.

This has to be my favourite among the lot. 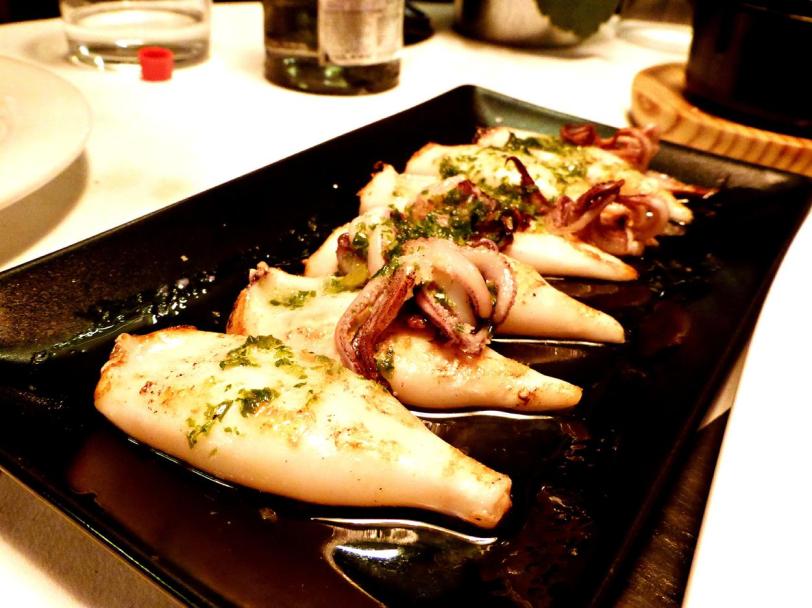 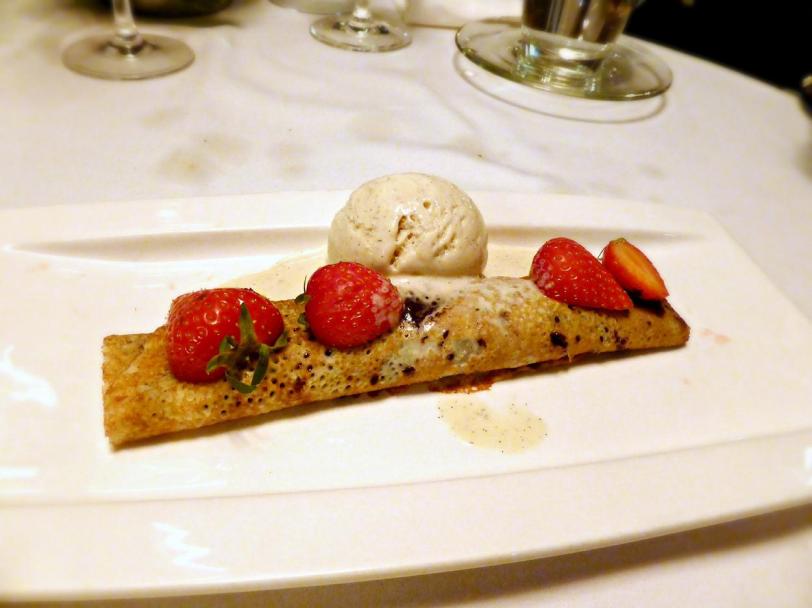 For lunch on the next day, I went with a recommendation I found online. There was a queue for this restaurant and there’s no doubt about the popularity. However, the place was big so the wait was under 30minutes.

I’m still new to Spanish food and wasn’t too sure what to order. After this meal I’ll just say – stick to only tapas. The other items on the menu was quite disappointing in my opinion, like the salads or sandwiches.

However, that green pepper on the mini steak was really good! I had a hunch that green peppers in Barcelona would be different. It was on the menu of the restaurant from the night before and I wanted to order that pretty badly but eventually did not. 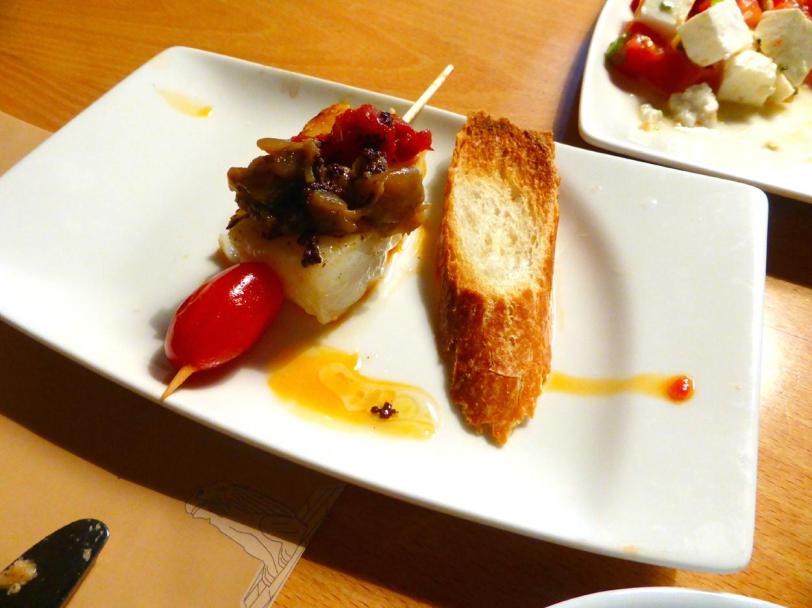 This wasn’t fantastic either.

Now this was more like it. I was extremely pleased to see that it included Fried Hot Green Peppers. They were the best! The next thing I preferred here was the fried anchovies. It wasn’t anything magical but somehow addictive to bite on. Kind of like the feeling you get while eating chips. The calms and prawns were too normal (in fact, I think the clams were below average. It was a chore to finish it) while the croquette just wasn’t my kind of thing.

This is just what we know in Singapore as calamari. In Spain they call it “andaluz style”. It was not that fantastic either but satisfied my mood for fried calamari.

Overall I think that the tapas here is decent for a really decent price. I will recommend this restaurant over the other one I’ve been to, but do your research beforehand so you’ll order the right dishes. Yelp is useful as they have pictures.

After lunch, I had a few hours before it was time to head to the airport. As there’s nothing much to see objectively, we just roamed the streets around our apartment area which was near Jaume 1 Metro. There were many ice cream and chocolate shops as well as many random finds. I found a shop specialising in candle making which looks like it has a long history.

With a stroke of luck, they had a Tweety Bird candle! I had to buy it of course. Such shops are rare even in Barcelona and I was glad to have came across something like that. This cost €2.80
Cereria Subirà
Baixada de la Llibreteria, 7, 08002 Barcelona, Spain 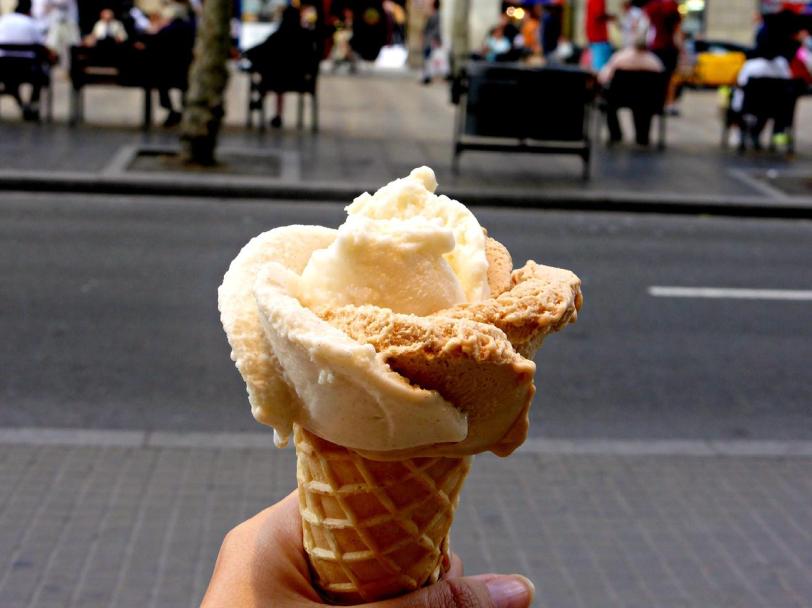 While making my way to the bus stop for the bus to the airport, I spotted Amorino gelato along La Rambla, the Orchard Road equivalent of Barcelona. The ice cream isn’t the best but the presentation is a winner. I’m having coconut and hazelnut here. Amorino has presence all over Europe and even in US. 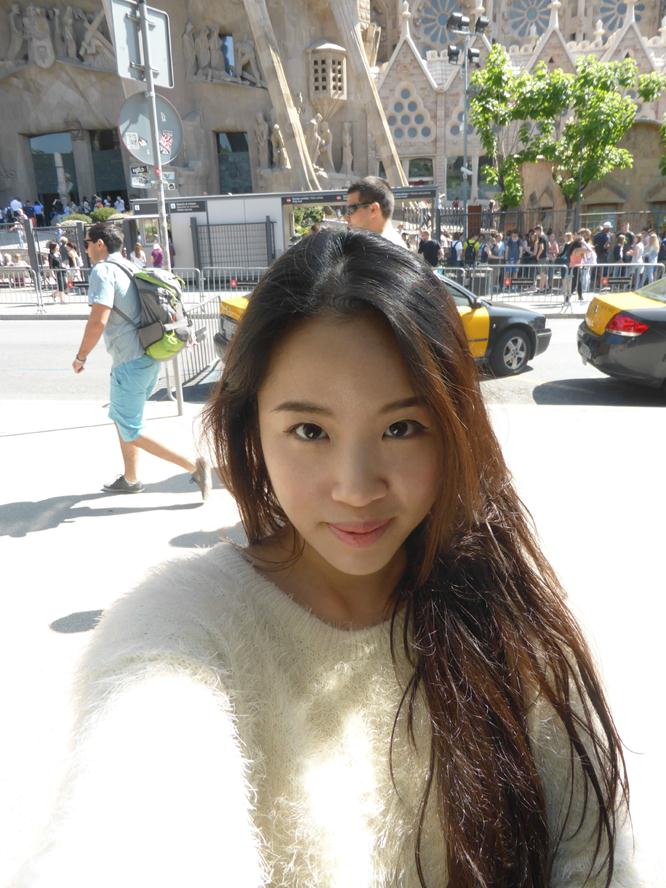 Just a selfie in front of Sagrada Familia.