Healthy and clean food is getting more common in Singapore nowadays and that’s a good thing. Most of the new places are serving grain bowls (quinoa or brown rice with various toppings) or protein salad (salad with big portion of meat or seafood). More specific diet places like Paleo, Vegan or Raw are less common, but a handful do exist. Afterglow is one of them, specialising in vegetarian/ vegan food with some raw items on the menu. I’ve heard of some people being advocates of this raw diet where they don’t eat anything that’s cooked and only mostly vegetarian stuff, but personally the values of it doesn’t align with my own idea of healthy eating. While I’m not a follower of the raw food theory, I’m still open to trying anyway, since it can’t be bad for the body. I’m not a vegan either, but  I don’t require meat at every meal and I’ll eat the vegan options if it happens to be good. I mean, I see the vegan/ vegetarian or meat options as equals and will pick whichever tastes good.

The decor of this place is pretty much like a hipster cafe, not surprising since it’s in this area.

I like how they replaced the buns with lettuce making it a low carb option on top of being vegan!

One of the reasons why I don’t quite agree with vegan/ vegetarian diet as being the best thing for health is because they still eat stuff like bread, which is processed too and made from wheat and gluten. If we’re talking about health benefits, I rather cut the bread and refined carbs too. But let’s not debate about it. I’m just sharing a good vegetarian option here. 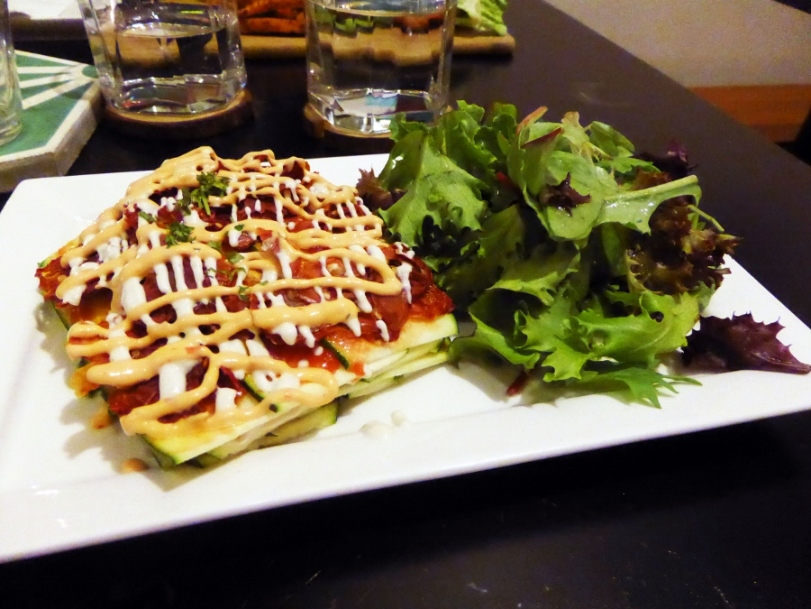 Being raw, my main was served cold. You need to get over that before being able to appreciate it. I’ve never had raw food (as in not literally raw food but, you know, dishes people eat while on a raw diet) before so the first bite was very foreign to me. I soon got acquainted with the idea as I went along and it wasn’t half bad. The texture was indeed crispy and I didn’t feel like I was eating pure healthy food. It was kind of like snacking since there was a crunch. The mix of dairy-free sauces was good but I couldn’t make out what it was. If I closed my eyes I may have thought it was junk food because it was flavourful and tasty!

Price wise, you may feel it’s way overpriced for just vegetables. But there’s effort and creativity required to put vegetables together in a palatable way. In that sense, I don’t see why it should cost less than a meat counterpart. If I had to pick on something, I would say that the portion was on the small side. Not all people looking to eat healthy are necessarily on a slimming diet alright!

Anyway, I was armed with The Entertainer App and I had my mains 1-for-1! It was a good deal.

Ambiance: 6.5/10
Food: 7.5/10
Value: 6.5/10
Overall: There aren’t many places of this genre to compare with but being my first raw dinner experience, this set a good impression.