For Day 3 of my trip I took a day trip out to Shiga Prefecture from Osaka. The main point of coming here was to hanami – sakura viewing. I missed the full bloom of Kyoto and Osaka, but sakura in Shiga generally starts a week later so in theory I should be able to catch it.

Shiga is relatively less famous than Kyoto and Osaka and it’s not a place tourists generally would venture out to on their own.  It’s pretty much like every other rural area in Japan and not a bustling city like Osaka, Kyoto or Tokyo. But there’s a very good reason to NOT give this prefecture a miss – the very well known Ōmi Beef 近江牛, a brand of wagyu cattle, originates from Shiga Prefecture. This is allegedly one of the top 3 wagyu brands in Japan alongside Kobe Beef and Matsusaka Beef. Having Ōmi beef became my secondary objective for this day trip!

Shiga Prefecture is pretty big and there are a several points of interest. Besides the famous Ōmi beef, Shiga is also known to have the biggest lake in Japan, Lake Biwa (aka Biwako). It’s somewhat like Lake Michigan near Chicago in USA. Shiga is actually closer to Kyoto, so if you’re based in Kyoto, Shiga will make a very close side trip. Otsu city, where you can view Biwako and even take a cruise ship, is a mere 10 minutes train ride on the JR train from Kyoto Station! Besides Otsu, there are many points where viewing Biwako is possible due to the sheer size of the lake. For my trip, I went further up north to Hikone, where Hikone Castle is situated. Hikone Castle is a hanami spot and nearby there’s view of Biwako as well so I thought I could take a look from there. 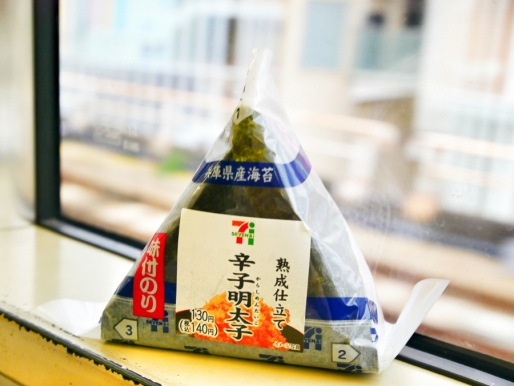 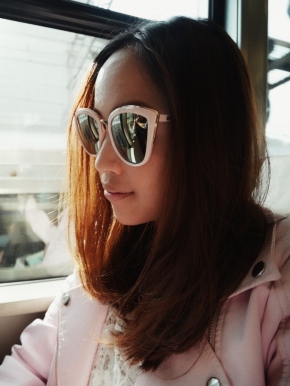 I bought the JR West Kansai Area Pass for 1 day which cost ¥2200 (with online reservation). Otherwise, my train trips to Shiga from Osaka would have cost me ¥3840! I started the day very early since the ride from Osaka Station to Hikone Station in Shiga prefecture would take 1h 20 minutes on the JR Tokaido-Sanyo Line. There are many lines at Osaka station, so look out for the Rapid Express Train bound for Maibara via Kyoto – it won’t be wrong. This is the same train as the train you would take if you’re going to Kyoto Station from Osaka Station.

I wanted to reach Hikone around 9am so I aimed for train departing at 8am. This train is not like a Shinkansen or Limited Express Train where they have big seats and tray tables. The configuration is like a local train, so if you wish to eat your breakfast during the long ride, do get sandwich or onigiri since you don’t have a table to eat with. I love these mentaiko onigiris from convenience stores in Japan! I had like 4 of these throughout this trip from various convenience store brands and they’re all good, not to mention really affordable too at only ¥140 each.

Tip: To even stand a chance at getting a seat you need to queue up for the train way before it arrives. I started queuing at 7:45am for the 8am train and there were already like 4 – 5 people in the queues for each door. Trust me, the 15 minutes wait is worth it. It’s way better to wait for the train than to squeeze with the peak hour crowd and stand throughout your ride! 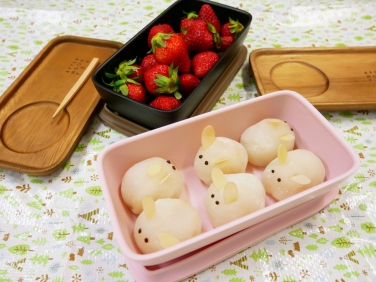 Whatever can go wrong will go wrong. It wasn’t raining throughout my 1hr + train ride to Hikone, but the skies decided the pour the very moment I alighted at Hikone. I prepared a picnic mat and food for a hanami picnic but that had to be cancelled due to the rain. I decided not to visit Hikone Castle entirely because such activities are not meant to be done in wet weather. I ended up in an old supermarket next to Hikone Station and had my picnic indoors instead.

With the rain not subsiding, I decided to get out of Hikone. Yes it was very disappointing to cancel all plans – hanami, Hikone Castle and Biwako only after going all the way there, but what to do? The temperature also took a plunge because it’s very windy when it rains.

And… I should have just came here in the first place. I spotted my first sakura trees up close and personal very randomly at Ōmihachiman! It wasn’t a park or anything, just a random piece of land near AEON mall next to the train station. 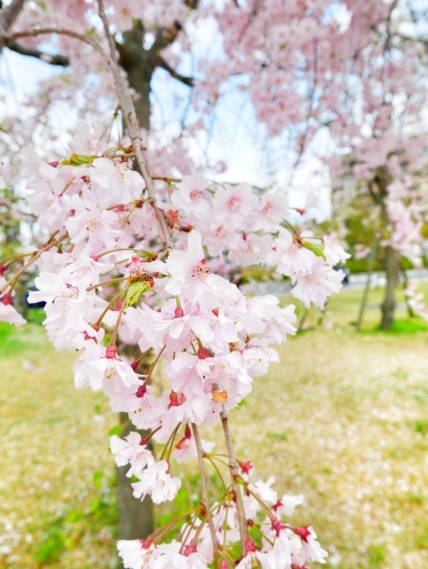 IT WAS BEAUTIFUL! This is not the regular common Somei Yoshino species, but a species with more petals. The trees were also weeping so I think it’s a kind of Yaeshidarezakura. I am no botanist so don’t quote me, but this is worth braving the wind and cold for!

Sakura petals scattered on the floor was the perfect background for a flat lay. I don’t usually do hipster things like this, but it’s sakura.

There was only a few sakura trees placed sparsely apart in this area but I was happy to at least see sakura in Shiga! And I was freezing with that attire. I wasn’t expecting the wind.

There are a few well rated beef restaurants in Ōmihachiman but I decided to just choose the best rated restaurant near the station, Restaurant Tiffany. It was just a short walk straight from the train station and I found it within 5 minutes. I would have gone for a more hidden one in secluded areas if I have a private vehicle; I will travel for food.

Slightly before 12pm, I decided to just have lunch earlier. I initially planned for 1pm, so I thought I was really early, but no!!! The first batch was filled by the time I arrived at 12pm, so I had to put my name down and wait for a seat. When you indicate your name, you need to indicate whether you’re having steak, shabu-shabu or sukiyaki. I already knew I wanted steak but it was interesting to observe that everyone had the same preference too. You can also indicate whether you want a table or counter seat. Since this is not a Teppanyaki experience, of course I wanted a proper table. As I waited, more and more people joined the queue and they’re almost entirely locals – good sign that this meal was going to be great! I did not notice any foreigners among the other diners besides myself. I had to wait for an whole hour before finally getting a table. 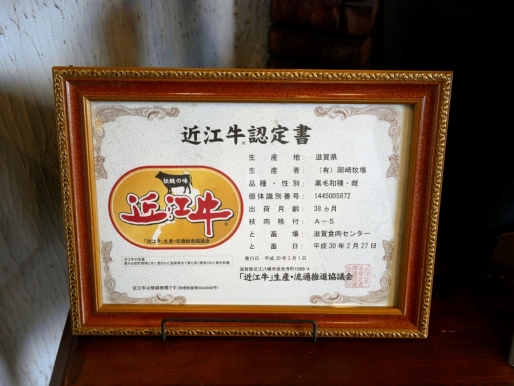 As mentioned, Ōmi Beef is one of the top 3 brands of wagyu in Japan. They even have a certificate to show that they serve Ōmi Beef here in this restaurant with details like which farm it’s from, gender, breed, marbling rating etc. 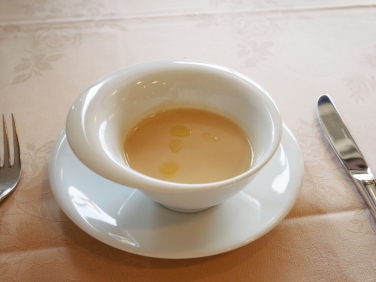 I chose to get the Steak  Lunch Course which cost ¥4536 (S$55) inclusive of tax. It comes with soup, salad, side vegetables, and bread or rice together with a piece of A5 Ōmi Beef Sirloin. This is a crazy good deal! Even if I added the price of my 1 Day JR West Kansai Area Pass to the cost of this meal, it is still way cheaper any A5 wagyu meal in Singapore (if you even can get such good beef in the first place).

By the way, rice is served scooped on a plate cai png style and it’s kind of weird, but Japanese rice and Japanese wagyu just tastes so good together. If you want to be ang moh you can choose bread but I’ll advise you to go for rice.

Usually long queuing time for food makes me disappointed because the expectation gets raised, but this one still exceeded my expectations even after waiting for an hour! I don’t think any photos of description I have of the beef does it any justice. You just got to try it yourself and you’ll be sold. Mine is medium rare and I don’t think you should order anything more cooked than this. Medium was kind of dry, so don’t let these cows die in vain. This sirloin is probably their most basic cut so I can’t imagine how good the higher quality cuts will be! I definitely want to try it again. I will come back to Shiga Prefecture just for Ōmi Beef!!!

The beef was just good dipped in salt but you can try it with other condiments as well – shoyu, ponzu, matcha or wasabi. Matcha is an interesting one and I found it matched well with salt. You can also skip all these Japanese style condiments and have it with good old mustard, placed next to the vegetables. I would also like to give some credit to the side vegetables for tasting really good too! I cleared everything on my plate and wished I had more!

I would highly recommend visiting Shiga Prefecture just for the beef. Compared to the highly commercialized Kobe Beef, this one wasn’t overpriced and the quality is seriously comparable to () Kobe Beef. I tried the Kobe Beef on the very next day of this trip as well as on my first trip to Japan (p.s. I saw that recently some people paid S$200/pax for lunch at the same restaurant as the one I went to during that first trip. They got fleeced…) so that’s how I feel about it.

If I had to choose between missing Hikone Castle and missing this Ōmi Beef meal, I’d gladly give up the castle in a heartbeat. Ōmi Beef is a must try!