For Day 4 of my Kansai trip I was headed for Hyogo, but this time it’s neither Kobe or Himeiji that I was headed to. I was planning to check out Kobe-Sanda Premium Outlets followed by a ryokan stay for the night in Arima Onsen 有馬温泉.

The selection at Rinku is more of mass market brands (Adidas, Levi’s etc) and local Japanese brands, with only a few designer stores, similar to Shisui Premium Outlets near Narita Airport. Rinku Premium Outlets is a convenient stopover if you have some time before your flight out of KIX, but if you want to commit a proper day for outlet shopping, I highly recommend going to Kobe-Sanda instead! Kobe-Sanda has almost everything that Rinku has, but with a lot more European designer brands, similar to Gotemba Premium Outlets in Shizuoka Prefecture, the popular choice of outlet mall for visitors in Tokyo area.

In the whole of Japan, these are the only two malls which carries many European designer brands. I would say that Kobe-Sanda Premium Outlets is Kansai’s version of Gotemba Premium Outlets and is made to serve the people of Keihanshin (京阪神, “Kyoto-Osaka-Kobe”), the second-most-populated urban region in Japan after the Greater Tokyo area.

In terms of number of stores, Rinku, Kobe-Sanda and Gotemba actually each have 210 stores and is equal in terms of quantity. However, it is the type of shops offered that differs. I made this table for easy comparison: 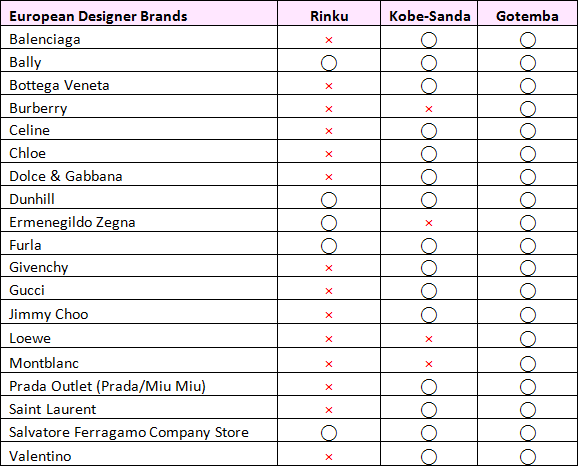 With tax-free and discounts, Japan is probably the next best place to get some designer goods if you aren’t intending to visit Europe anytime soon. The prices are way better than what you’ll pay in Singapore!

I took the Express Bus from Osaka Station and it was a good decision! They provided a map of the outlet, discount booklet and a Pilot brand pen for us to plan our shopping on the bus. The bus departs from Osaka Station daily – 10am on weekdays and 8:50am on weekends. I went on a Sunday and I arrived at the outlet slightly before 10am – exactly when stores open for the day. If you want a round trip back to Osaka, the bus departs from the outlet mall at 4:10pm. I was doing this one way, so I brought my luggage with me and it was fuss free to place it in the luggage compartment at the bottom of the coach – they allow one piece of big luggage per passenger. Coin lockers are available at the Premium Outlets so bringing your luggage along will be no issue at all!

This bus ride usually cost ¥1500 one way and you can buy your tickets at the bus office next to where you’ll board the bus, but with online reservation it will cost only ¥1000! This special price is valid even a day before departure so I highly recommend booking online if you want to save ¥500 and guarantee your seat. Bus seats for weekends may sell out, so do take note! 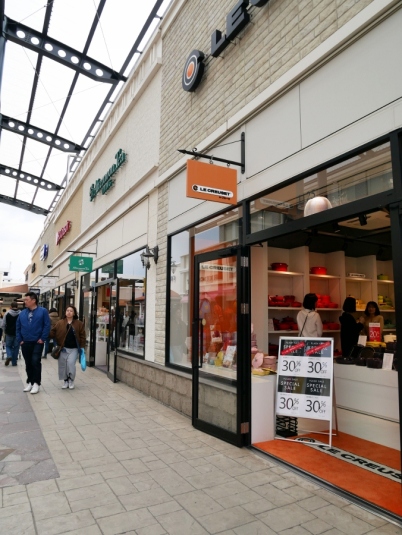 I really enjoyed my time shopping here because the selection of shops was pretty good. This is random, but I’ve never seen a dish drying rack so pretty before. I bought it. It’s from Franc Franc. 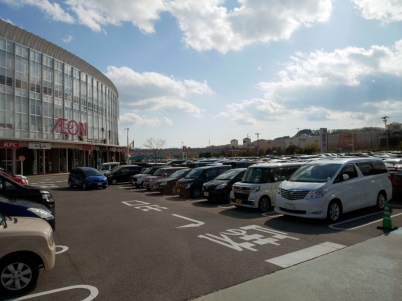 AEON mall just next to Kobe-Sanda Premium Outlets, connected by a link bridge. You can find a tax-free Muji store, Daiso and affordable dining options. You can probably spend the whole day here with the outlets and AEON Mall. Both malls were quite crowded when I was here on a Sunday.

I left Kobe-Sanda Premium Outlets at around 3pm because I had to catch the bus to Arima-Onsen. This bus is valid only on weekends and there are only 3 buses a day. It’s a local public bus route operated by Shinki Bus and you can pay the fare with ICOCA or  cash on board. As it is a public bus, it will stop at various points along the way before arriving at Arima-Onsen and is not a direct service.

Arima Onsen is an old hot spring town, similar to Kinosakionsen, also part of Hyogo Prefecture. This town is popular among locals for a weekend getaway or a day trip to access the various public bath houses. Arima Onsen is a small area that can be explored on foot, but because the area consists of steeps slopes up the mountain, I chose to stay in a ryokan that was most accessible from the bus stations. 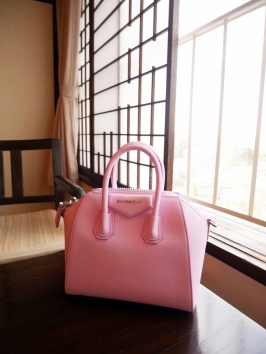 The ryokan stay at Arima Gyoen was pretty expensive only because the dinner does not come cheap. We’re having Kobe beef for dinner! 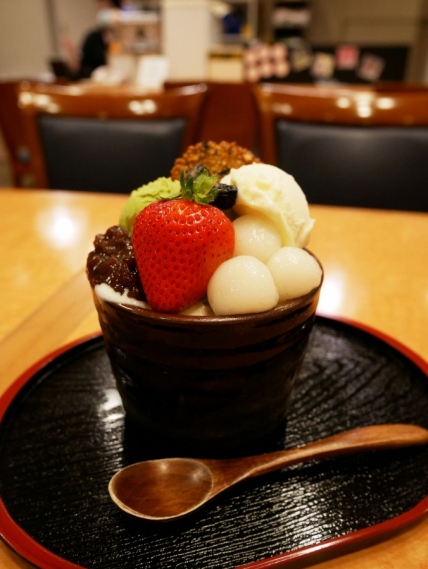 The ryokan gave us some vouchers to be redeemed at the in house cafe or gift store so I redeemed this parfait and Kobe beef bun. Parfaits in Japan usually have a crunchy layer of cornflakes at the bottom, but for this one the crunchy layer was something else. I later learnt that this crunchy texture was from broken pieces of tansan senbei – a carbonic acid rice cracker is mainly made of flour which is a local speciality from Arima Onsen. I spotted this sold in shops along the streets while exploring Arima Onsen area.

Along the streets of Arima Onsen you can also find eateries and restaurants offering Kobe Beef. 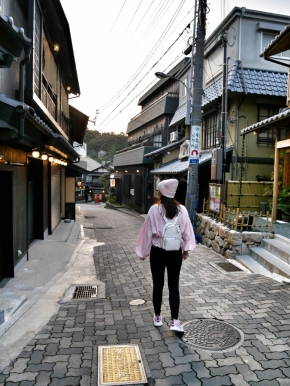 I spotted a tree of Somei Yoshino still in bloom.

Overall, I felt that Arima Onsen was a nice place but a little old. I preferred Kinosakionsen if I have to choose one within Hyogo, but it’s was nice getting to know this place!

Kobe Beef is known as  one of top 3 brands of wagyu in Japan together with Matsusaka Beef and, Ōmi Beef. Of the three, Kobe Beef is probably the most famous to Singaporeans because of it’s exposure through the media in recent years.

As Arima Onsen is in Hyogo, north of Kobe, this is a place where you can try Kobe beef without the ripped off prices you’ll get Kobe City itself. Kobe beef isn’t literally reared in Kobe, but in farms from other parts of Hyogo; “Kobe” is just the branding. “Kobe Beef” is also not a species of cattl, but is actually a brand of beef from Tajima cattle that was raised according to the standards set by the Kobe Beef Marketing and Distribution Promotion Association. One of the criteria to qualify as Kobe Beef is that the Tajima cattle must be raised in Hyogo. For instance, Tajima cattle raised in nearby Tottori or Kyoto could possible achieve similar quality, but they cannot be branded as Kobe Beef. I had Tajima beef during my ryokan stay in Kinosakionsen previously and I found the quality to be comparable.

I spotted this poster in the ryokan showing the list of official restaurants/ food distributors that carry Kobe Beef and Arima Gyoen is one of those places. Places which are on the list can display this sign in their shop to prove that their Kobe Beef is real. I zoomed in to the distributors/ restaurants in Singapore, just so you guys can take note of where to find Kobe beef in Singapore. 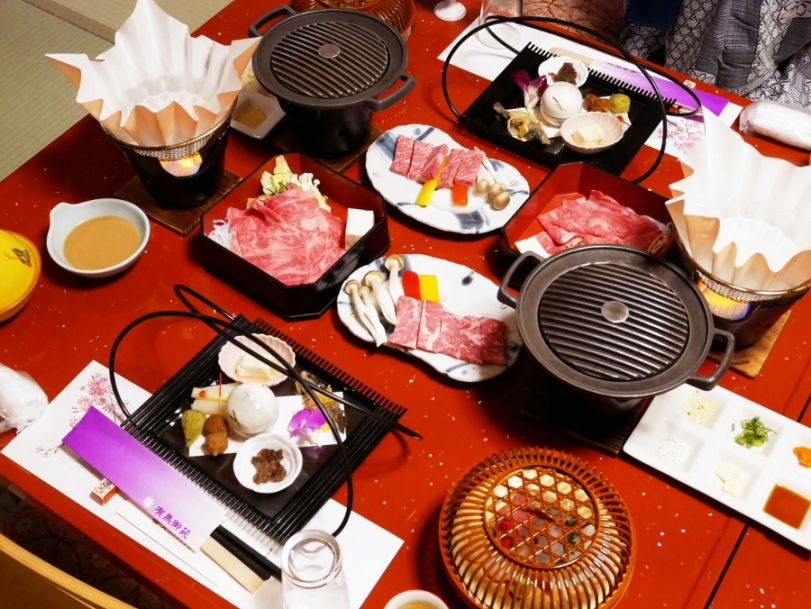 I specifically wanted to have my dinner in my room so this was one of the reasons why I selected Arima Gyoen. Some ryokan only serve the meal in their dining hall but I prefer the privacy of my own room; It’s just like private dining. I upgraded my meal to include 2 kinds of wagyu – Kobe Beef for shabu-shabu and Kuroge for steak grill.

The marbling from the Kobe Beef was crazy fine. You can even see through the marbling when the beef is cooked! It was very soft and tender indeed. However, Arima Gyoen needs to improve on their dipping sauces for shabu-shabu. I would like it better if they had ponzu.

In Japan, there are four commercial wagyu breeds –  Japanese Black, Japanese Brown, Japanese Poll and the Japanese Shorthorn. Kuroge beef actually just refers to the beef from Japanese cattle with black hair. Tajima cattle is a type of Kuroge cattle, and Kobe Beef is from Tajima Cattle raised in Hyogo that meets the selection criteria. Basically, Kobe Beef is Kuroge cattle, but Kuroge is a broad category that can include many brands of beef.  Matsuzaka and Ōmi Beef are also from Kuroge cattle.

(By the way, I am no zoologist, so don’t quote me if I’m wrong about this classification of cows)

Between the generic Kuroge Beef and branded Kobe Beef from this meal, I actually find no big difference. Overall, while Kobe Beef was good, I think many other wagyu brands match up equally well. In fact, the Ōmi Beef I had in Shiga Prefecture the day before was probably even better. 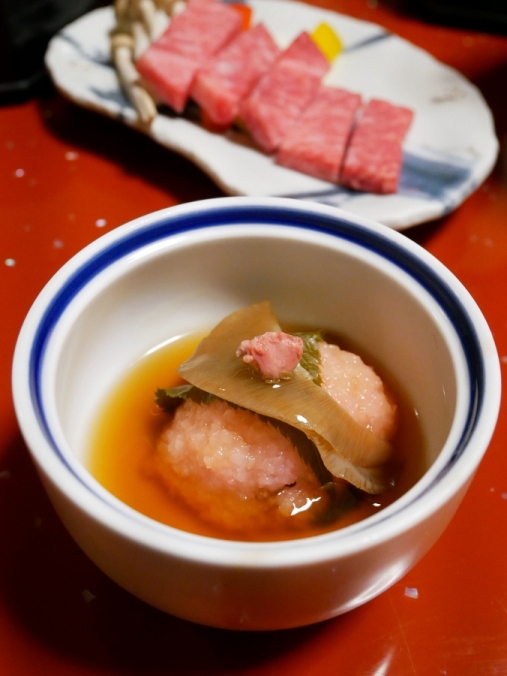 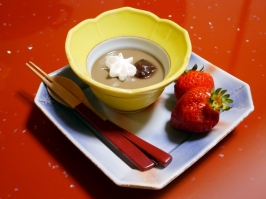 As this was a kaiseki dinner, there were other dishes included in the meal as well. I forgot to take picture of the steamed dish, chawanmushi, which they served midway through my meal. The whole meal quite enjoyable and very filling. I had to wait quite a while for my food to be digested before I could enjoy my soak in the hot spring! 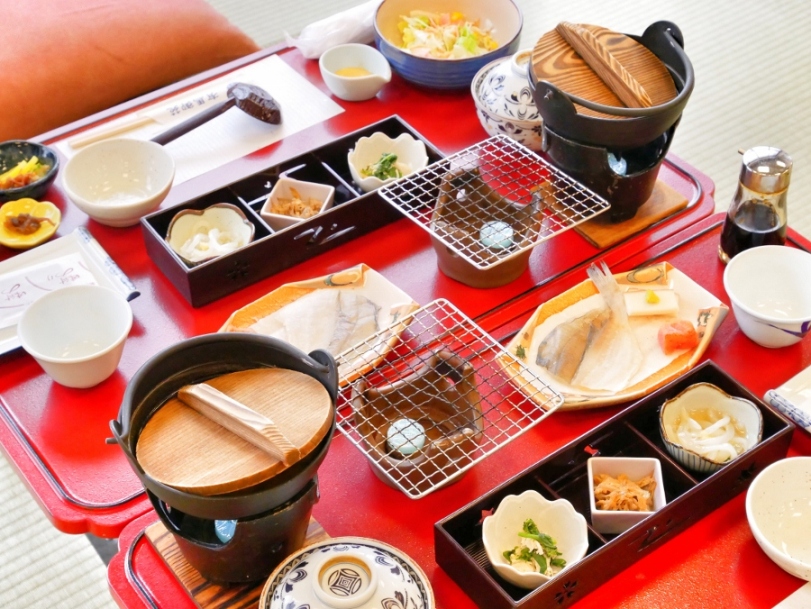 Breakfast was done teishoku style and served in their dining hall. Some love it, some hate it.

Overall, my stay at Arima Gyoen was alright, and I had good sleep. I generally like sleeping on tatami mats, it’s just me. All the staff I interacted with were attentive and polite and I definitely felt their hospitality was professional. However, this property was kind of old, so perhaps I would choose a newer ryokan if I come back to Arima Onsen one day.

I left Arima Onsen on a 10am Hankyu Highway bus for Kyoto. The front desk kindly helped me reserve my bus seat when I checked in the previous day, but actually the Hankyu bus station was just a short 2 minute’s walk from the ryokan! It was a 75 minutes coach bus ride, cost 1800 and terminates at Kyoto station. JR also operates an highway bus service to Kyoto but the timing wasn’t right for me. From Arima Onsen there are also highway buses heading to Osaka and Kobe.