I was curious about The Dunearn since quite some time ago, as I’ve heard good reviews about it (but later on, some bad reviews) and when I saw a deal on Groupon, $19.90 for 5 course dinner, I decided to give it a try.

The restaurant was located in NUSS Bukit Timah Guild House, and is open to the public. However, a dress code applies so do not come dressed in home clothes.

The restaurant was almost empty even on a weekend. I could see why, as the restaurant wasn’t any special and the location is totally inaccessible without a car or cab. To make things worse, the address provided wasn’t very searchable on a map. To get there, you have to enter the main entrance of NUS Bukit Timah Campus at Dunearn Road/ Bukit Timah Road/ Kheam Hock Road and find your way around.

The complimentary bread was served warm, and the crust was slightly crispy. The bread itself was fluffy, and I liked this bread. In fact, it was one of the better things I’ve had for this dinner. 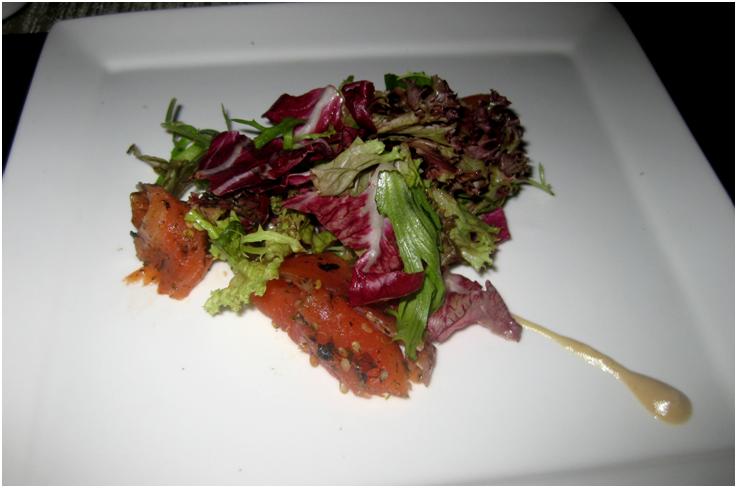 This was the cold appetiser. I love smoke salmon and as long as it’s not expired, smoke salmon will not go wrong. Thus I liked this course, although there was nothing special about it, as though I could do it at home myself. (which on second thoughts, maybe I should!)

The soup for the set menu of October was Crab Bisque. Crab Bisque is similar to lobster bisque, with the strong seafood taste. Comparing to the crab bisque at Dozo and Café Oliv and the seafood bisque at The Knolls, this fared better than Café Oliv’s, but wasn’t as memorable as Dozo’s and The Knolls. Nevertheless, as I generally love Crab Bisque/ Lobster Bisque/ Seafood Bisque, this was easily my favourite course of the meal.

This was the warm appetiser. I forgot to snap a picture of it, unfortunately. It was 3 slices of smoked chicken served with a tiny serving of salad. The chicken was indeed very smoked, so smoked that I didn’t like it. The chicken meat itself was fine and tender, but the smoky smell was too much for me. In fact, it reminded me of cigarette smoke. 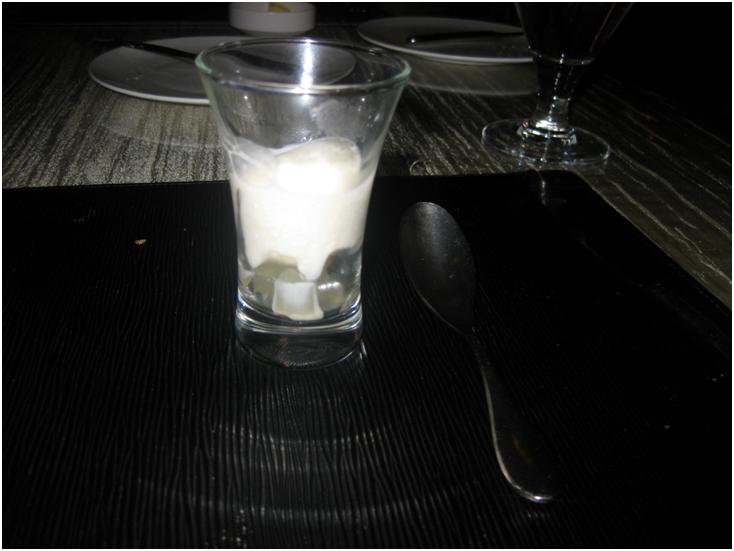 Sorbet was served as an intermezzo for palate cleansing. This sorbet was sour and I didn’t like it. I don’t like sour food. Also, I was 90% full after the crab bisque so I could hardly stuff in more!

I had this for my main course. Although the beef wasn’t unfresh or tough, this steak was unimpressive as I felt it tastes just like the steak I could cook at home, with a rib eye steak from NTUC. Also, the cooking was uneven. Half of it was too rare while the other part was done right. There were beans, carrot and mashed potatoes too. I liked the mashed potatoes but didn’t touch the vegetables at all, because I was very very full.

This was the other option for main course.

I liked how they made an effort to serve the ice cream solid but other than that, I didn’t like this dessert. The main reason was that it was very sour, and I was very full.

Even the berry compote was sour. The sorbet was green apple flavour too, which was too much for me. Under the scoop of sorbet was nuts. I would prefer if it was (sweet) crumble.

Regular coffee or tea was included in the set. I liked the biscotti that came with the tea mainly because it was sweet! Finally! Also, it was really nice. It was full of nuts and was crunchy.

On the whole, the food here wasn’t outstanding at all. It was not terrible but just very average and will not impress. But for $19.90, I guess it was alright.

Overall: for the original price, this meal will not be worth it at all considering the location and the very average food. There are better choices out there.

NUS Bukit Timah (enter the gantry, and then park in front of NUSS)

2 thoughts on “The Dunearn – Dinner”