I am back from my summer vacation and I went to Chicago, Niagara Falls (Ontario), New York City, Barcelona, Paris and the French Riviera. To some, this itinerary doesn’t really make sense. However, any trip to the East Coast of USA from Singapore requires a transit around Europe (there are no direct flights) so stopping over at France was not something out of the way.

To get the best value air tickets, booking can be done separately. I did not buy a multi city ticket but bought two return trips and it turned out cheaper. I flew by Air France and from Singapore to Paris it cost around $1000, which is a steal for the 12-13h non-stop flight. For Paris to US, it ironically cost more and I later learnt that for US flights the best prices are when you book 3 – 5months ahead. It cost around $1200 which makes the total a little less than $2200 – which I found reasonable.

Getting around downtown Chicago was quite easy because the roads are mostly like a grid and is not confusing. Taking a train from O’hare Airport is convenient and inexpensive. A 3 day pass would be good and you can take the metro and buses as and when you like. However, do not take it for granted that the ticket machines are always smart. One of the machines took our money but refused to spit out the ticket. There were no staff around to issue a replacement and for the 3 days there, one of us had to go around explaining the situation in order to be able to board the trains.

Chicago can be categorized into various neighbourhoods and for 2 nights I stayed at Doubletree by Hilton Magnificent Mile. The location was convenient and near almost everything required and is a good place for shopping. It is located near The Loop, which is the CBD area of downtown Chicago. 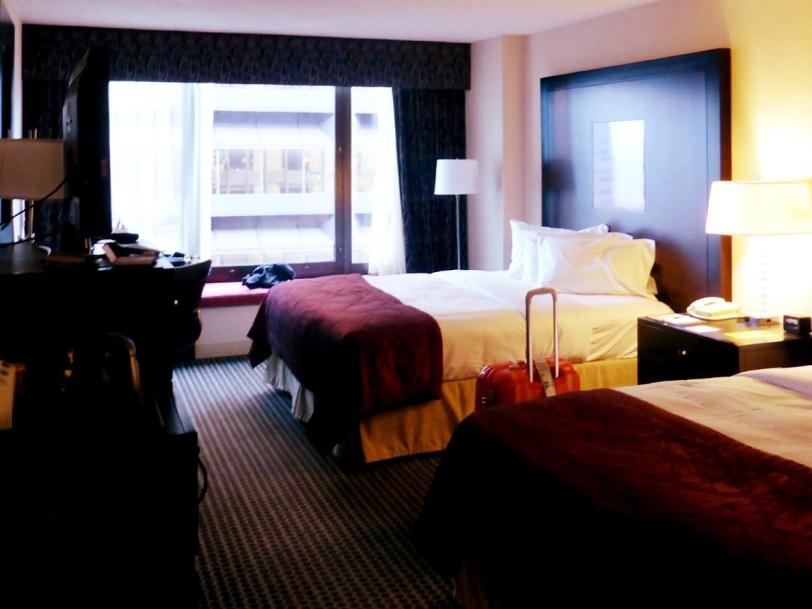 If you like cities but prefer it slightly quieter and cleaner, you’ll like Chicago. I personally think that it a cleaner version of New York City. I wish I had more time in Chicago so I could explore the neighbourhoods away from The Loop. I caught a glimpse of those along the way from O’Hare to downtown and it looks really different!

For people who intend to shop in the US and only have New York City in your itinerary, it is good to add another big city like Chicago because you will probably end up not buying anything in New York due to lack of sizes and stock. In Chicago, almost every popular US brand can be found and the shops are generally less crowded and have abundance of small sizes. If the trip was all about shopping I could really shop all day there, but it wasn’t so I didn’t get to shop a lot. If you are lucky (or strategic) to be there during major holidays like Memorial Day, you may be greeted with huge discounts. For example, Gap was having 40% off all regular priced items and I got a good sports bra at US$12! I don’t even want to imagine how much they are selling it for in Singapore. This was not unexpected but Chicago was the best place to shop. Note that sales tax is applicable to everything you buy in US and is different in every state and city you go and it is quite high in Chicago.

Honestly there isn’t really much to see. Shopping and eating should be enough to keep you busy. Also, I liked that flowers are everywhere in Chicago making the city beautiful. Even better when there was a variety of flowers and not just predominately one species!

Lake Michigan is huge and extends up to Canada.

A free zoo is located within the park but weirdly (on hindsight it should be expected) there were really few animals in sight.

Sorry for the bad photo but this is one of the very few buildings which survived the Chicago Great Fire in 1872.

Now here’s the main point. Chicago is known to be the other food city in US other than New York City. I would have tried more restaurants but the day we arrived after more than 24hrs of flight and transits, everyone decided to give dinner a miss. I did not know that I was going to coincide with Memorial Day on my third day there and some restaurants were closed too. (This means I have to be back again some day!)

For breakfast on the first morning, I picked a place situated really near Double Tree and the generally the food was pretty decent (if you compare it to those typical brunch cafes in Singapore, it is easily better). I like how they offer fruits as a side in place of potato if preferred, so a healthier breakfast is possible. I noticed that many places offer such option in the US in fact, probably in attempt to encourage healthier eating. Every main comes with either pancakes or toast making the portion rather big. 2 mains can be shared among 3 if none of you have humungous appetites. With drinks included the total cost around US$24, which is way more reasonable a price for breakfast food than what typical brunch cafes in Singapore charges! 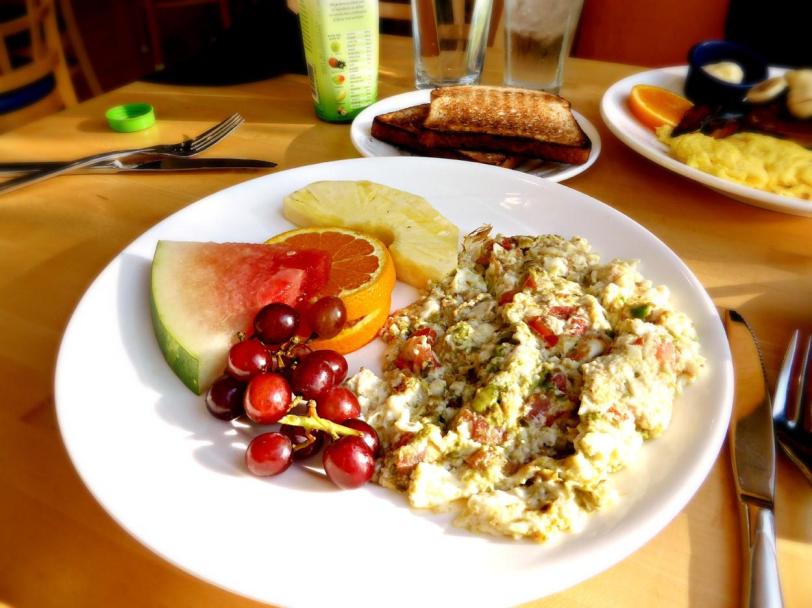 Egg white omelette with avocado and tomatoes – US$9.49

All omelettes includes 3 eggs and is served with a side of diced red potatoes or fresh fruit, and your choice of toast, pancakes or english muffin. You could have it all egg whites or beaters (an egg substitute) at no extra charge, which is a good because I don’t see why some places charge extra for egg whites only! It’s not as if they really throw the yolks. It could be used to make hollandaise and many other things. In fact, they probably have surplus of egg whites in their kitchen.

For BIG appetites! Two eggs any style, two slices of hickory smoked bacon, two sausage links and your choice of 2 pancakes, 2 slices of french toast, 2 crepes, or a half waffle.

You could upgrade to a side of specialty pancakes for $2.99. The pancakes here were upgraded to “BANANA-BLUEBERRY CRUNCH CAKES” – multigrain batter mixed with almond granola & blueberries, topped with bananas and honey. I think the pancakes were really good.

Later on in the day, we had breakfast food for a late lunch again, since this place was highly recommended on Trip Advisor. Honestly, I don’t think the standard of food here was significantly better than others (but it’s still good! Nothing was actually really bad). There was a rather long wait for the table, about 45minutes, probably due to the popularity on Trip Advisor. 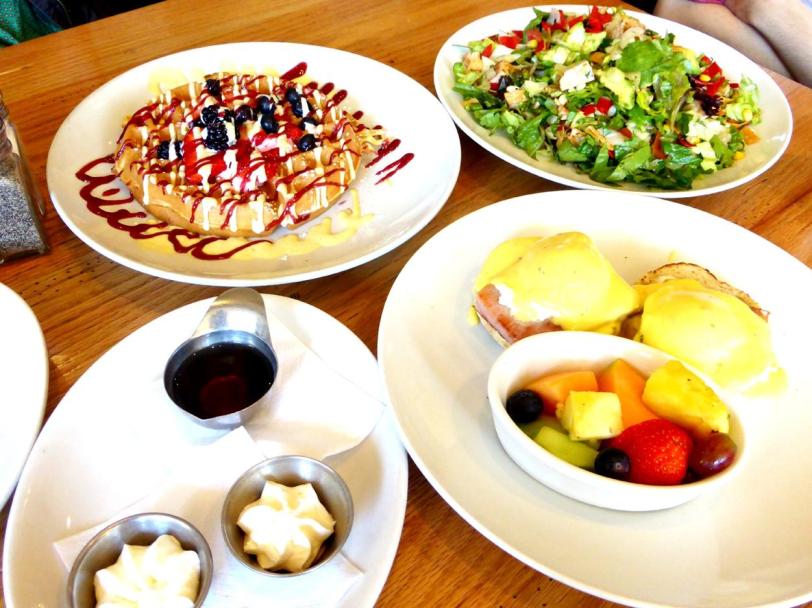 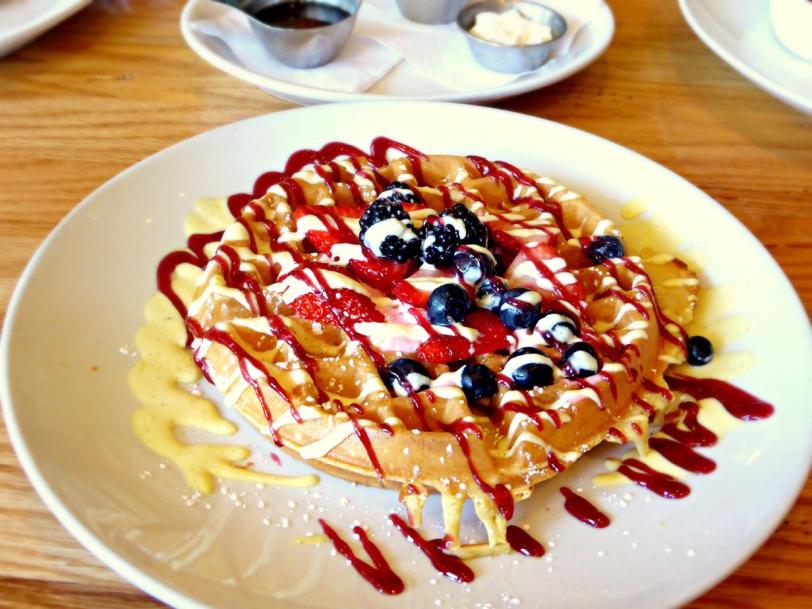 The sauces on the waffle was rather overwhelming and honestly I would prefer if they go easy on it, but I think the texture of the waffle was good. It was easily comparable to all the good waffle places we have in Singapore. It was fluffy enough for my liking.

I am rather unfamiliar with egg benedicts because I seldom have brunch in Singapore, but this was the best I’ve already had! The eggs was perfectly poached and the hollandaise was not too tasteless, making it taste good overall. This one is worth the evil calories.

For breakfast on the second morning, nothing was planned and this place was found by chance walking down the streets of Chicago. As usual, fruits are an option for the sides and pancakes comes with almost every main ordered. 2 mains are enough for 3 and the bill came up to about $24 again.

Nutella was added to the pancakes for additional $1.99.

The pancakes were really fluffy – perhaps too fluffy until it was not cohesive and broke into bit easily. Still, it was satisfying enough for a simple breakfast.

It was Memorial Day and most restaurants or attractions were closed. Lunch ended up to be an unplanned affair since there weren’t as many choices left. Eataly happened to be open that day. Eataly is a high-end Italian food market/mall chain comprising a variety of restaurants, food and beverage stations, bakery, and retail items. The store originated from Italy. There are two Eataly stores in US – New York and Chicago.

I ordered the Margherita and it is fool proof. Margherita is always nice and the only pizza flavour I approve of.

That marks the end of my short stay in Chicago. I wish I could try more restaurants because Chicago is THE food city in USA! I took a 16h bus ride on the Greyhound to Niagara Falls, Canada, later in the afternoon, and no I am not crazy. Look out for next post about the legendary Niagara Falls!