When I found the opportunity to visit Chicago, I thought it was my best chance to dine at Alinea. I first heard about this restaurant when I saw it featured on a documentary on cable TV. This restaurant is known for molecular gastronomy and is acclaimed as one of the best in the world for this field. The only other one I’ve tried before was Fat Duck in Bray, England.

I’d like to emphasize the difference between such restaurants and typical fine dining restaurants: typical fine dining restaurants are restaurants with romantic and posh looking ambiance and impeccable service with high prices and is somewhere conducive for impressing your date or to celebrate special occasions like wedding anniversary and such. The food may or may not be fantastic and it can be anything, any cuisine, modern or traditional. For restaurants like Alinea and Fat Duck, they do have sky high prices but the similarities ends there. The ambiance isn’t exactly known to be the poshest nor is the service impeccable (super hard to get reservations, even requiring you to pay upfront? Is that called impeccable service?) and your date may only be impressed if they know their food and is interested in molecular gastronomy. This is no place for people who only appreciates traditional steak or grilled lobster for expensive dinners.

I personally do not regard Alinea as a fine dining restaurant. To me it is more like a circus experience than a romantic fine dinner in many ways. Ridiculous and funny stuff should be anticipated. You should expect to participate in the “circus” at some point of time even. That’s just how I feel about dining here.

Anyway, the experience at Alinea and Fat Duck was very different, though this should be expected anyway because essentially USA and Englad are different countries and have different cultures. Fat Duck gave me a more country and cutesy feel while Alinea was very city-ish. I don’t know if this makes any sense to people who haven’t personally experienced them but I think you can tell from the pictures to follow.

Osetra caviar, to be eaten with a mother of peal spoon. ( Not surprised because I do not except to use anything else other than mother of pearl anyway.)

Salsify is a root vegetable from Belgium. It has been dehydrated and reconstituted to look like a twig among the branches. We had to dig in to search for it. 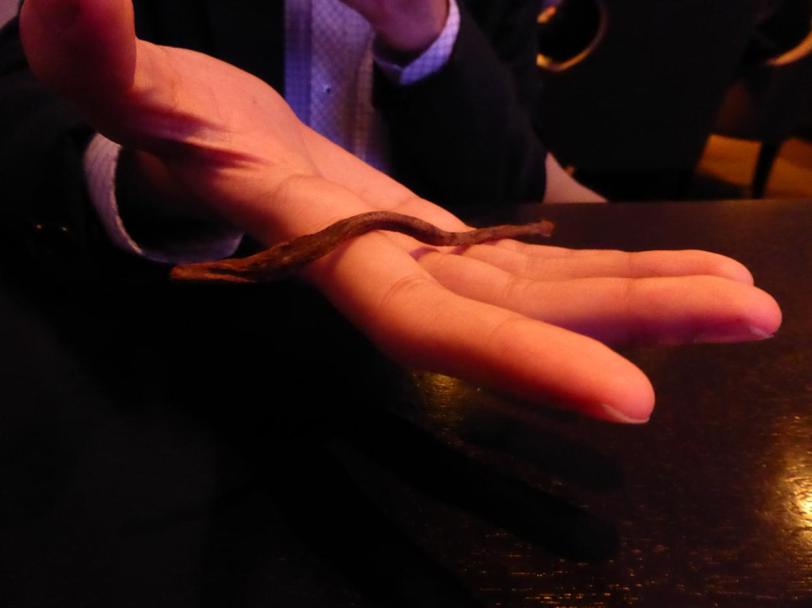 The taste was quite salty and umami (probably due to soy sauce) and it was fun to nibble on.

For this one, you got to imagine you’re a frog. The whole lily pad lookalike leaf is actually the size of a palm and everything can be wrapped up like crepe and be eaten. From the log barrel there’s cold soup inside and it was to be sucked from the metal outlets. The soup had green notes to the taste (probably to taste like river water?) and while it was something unique, I didn’t particularly like it. 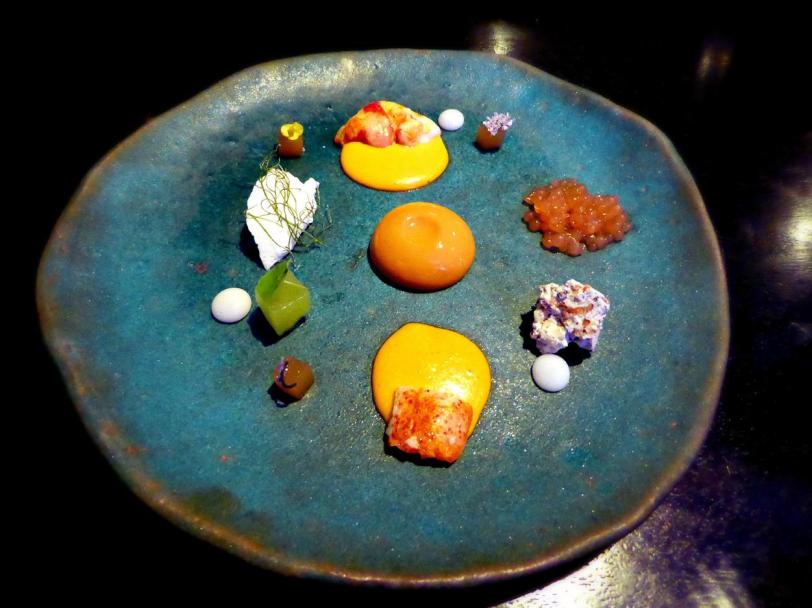 This dish is meant to be Indian inspired. Each morsel had Indian flavours like ghee, coconut milk and spices. 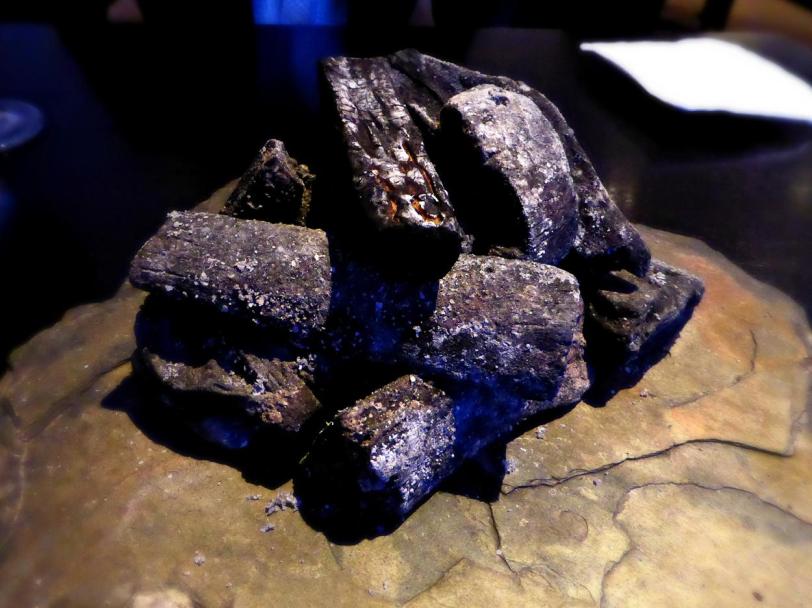 This stash of “charcoal” was placed in front of us but we was told not to touch it. It has not been lit and you can easily spot the odd one out – the one in the middle was something else disguised as charcoal. This was probably placed here at this point of the meal to pique our curiosity. (They’re trying to be funny.) 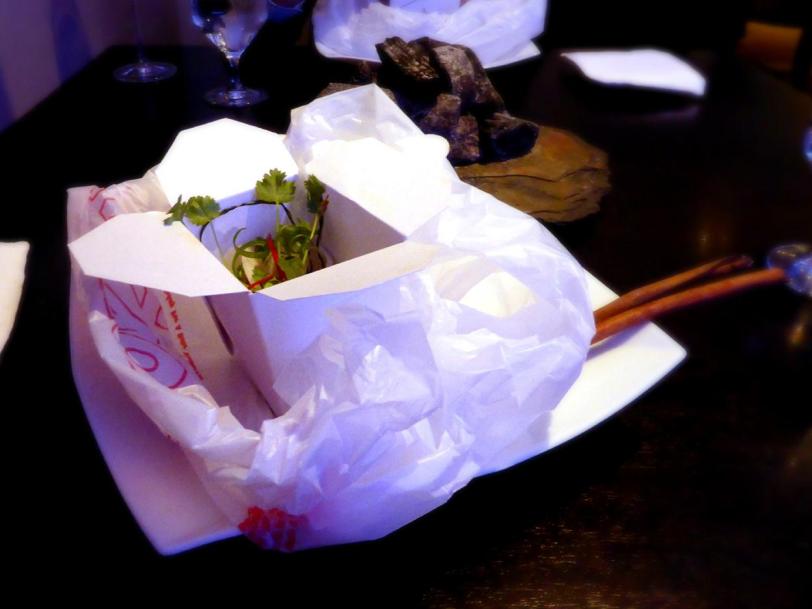 The charcoal remained on the table while the next course was served. This was Chinese inspired and it was presented to look like a box of Chinese takeaway orange chicken.  The taste of it was obviously not how real Chinese know Chinese food to be but I can imagine this is the idea of how Chinese food is in America (like everything is sweet & sour, but no, we do not always have that in Asia). The cinnamon sticks are to be used as chopsticks and it imparted a slight cinnamon flavour to every mouth I took.

The ends of the cinnamon sticks were lit and it created some aroma. 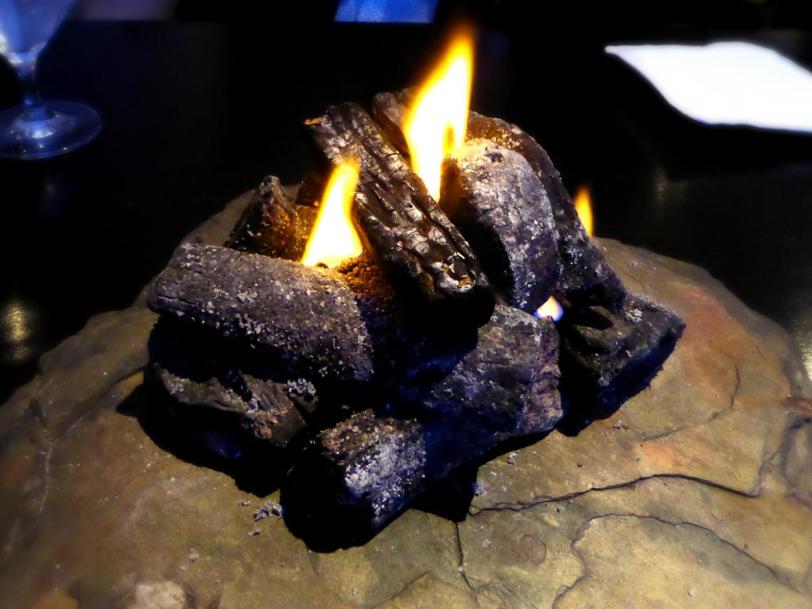 While having the Chinese takeaway the charcoal was set on fire.

This course was intended to be Japanese inspired. 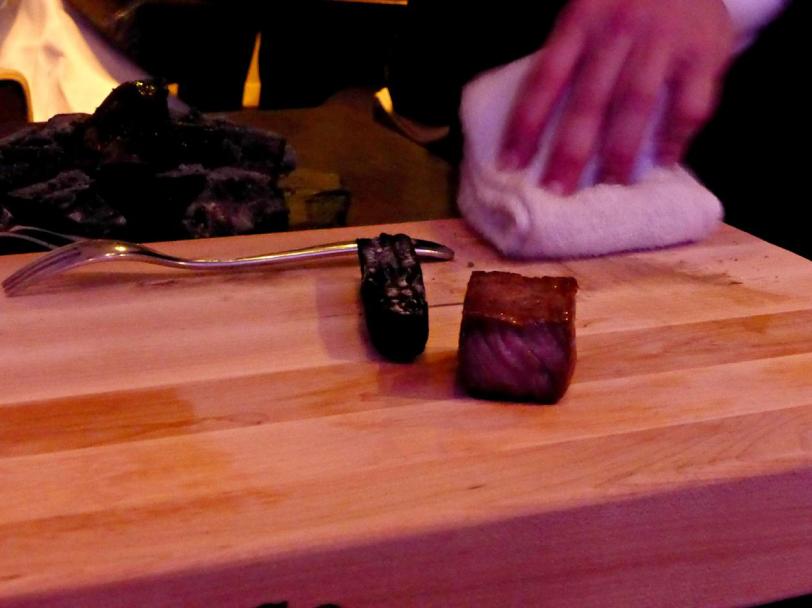 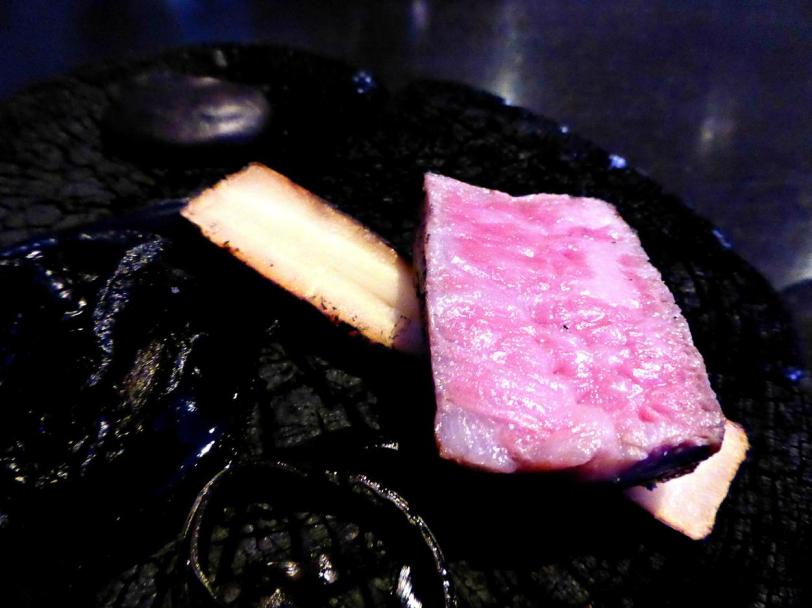 A5 Wagyu. The high marbling was still visible. 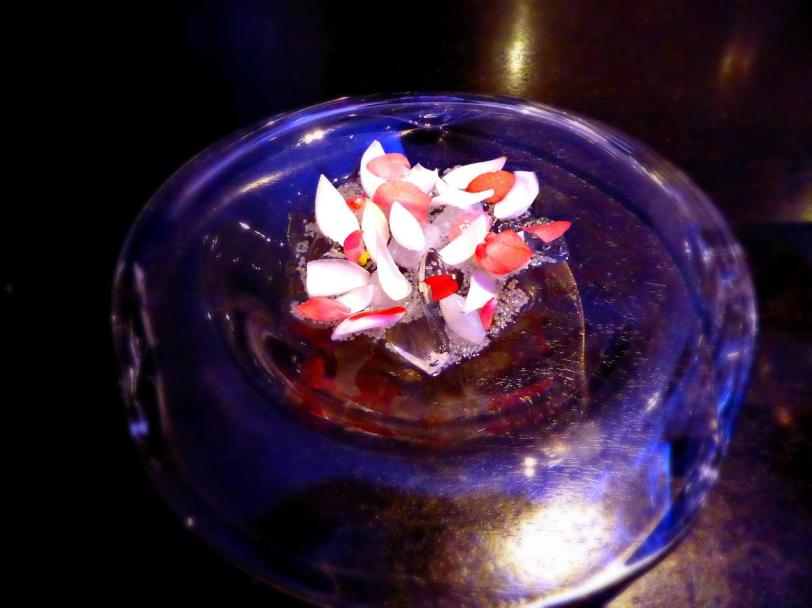 I saw on TV that Alinea likes to experiment with distillation. Kind of relived that it wasn’t toilet water or something like that this time.

We were handed some newspaper and was told to spread it across the table for the next course. This is how the meal includes participation. 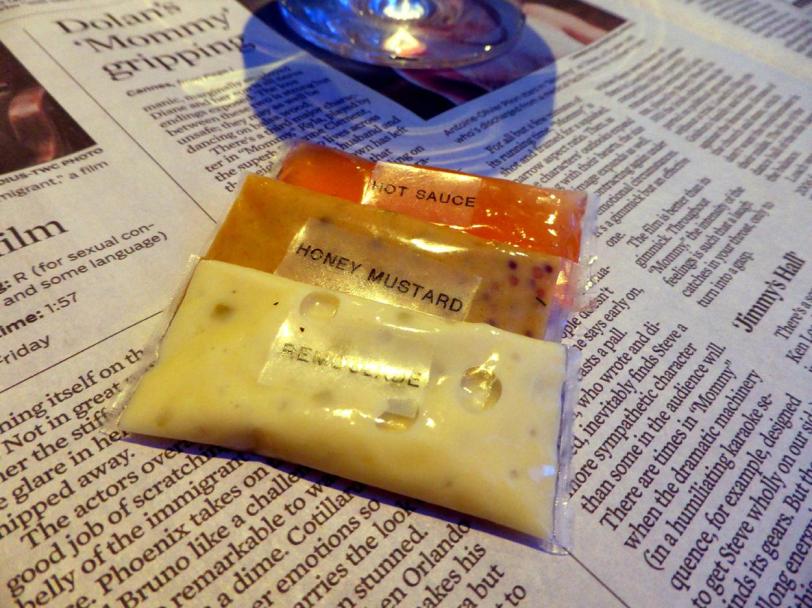 The rhubarb was freshly shaved on in front of us from a stalk of rhubarb leaf that had been hanging above our table the entire time. I knew that was going to be used somewhere!

Well, at least I tried. Really. Pig ear is not my thing. The wood ear (or black fungus as we know it in Singapore) was reconstituted.

Quite literally this is cold potato truffled soup and hot potato ball, not forgetting the slice of black truffle. Pull the pin and let everything drop into the tiny bowl and eat it directly in one mouth.

The single ravioli should be eaten in one mouth. I love these one mouth kind of dishes.

The blueberries were poached in red wine vinegar and the meringue was lilac flavoured. The bubblegum thread was something new. This was the first dessert course and I liked this mix of textures and flavours. 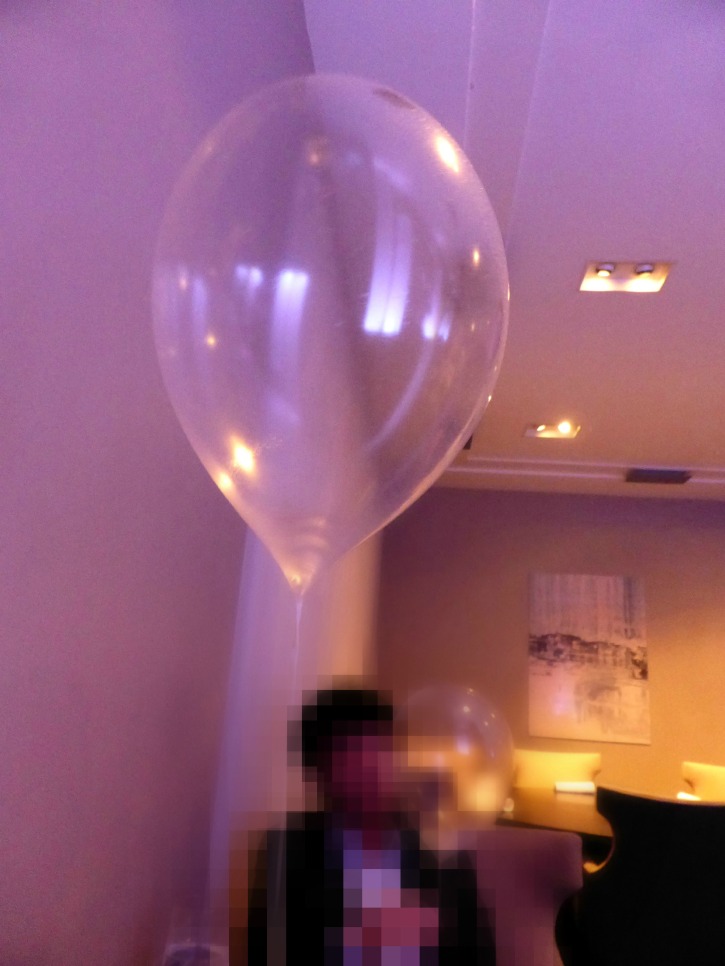 The balloon was made of green apple taffy and was entirely edible, including the string. We were told to suck anywhere on the balloon to inhale the helium, making everyone’s voice squeaky and funny. 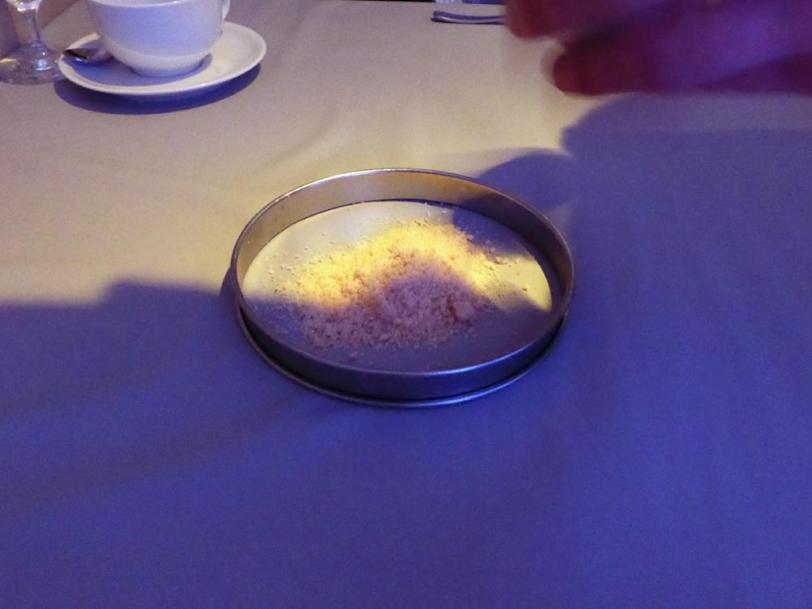 Finally it was time for the finale. They placed a silicon mat on the table and it was prepared on the spot, on the table. I remembered seeing something done in this fashion on the television documentary about Alinea, so I was really looking forward to seeing this.

Every step was a cool magical performance. Dry ice was used to actually make everything set in into a tart, which we would otherwise require ovens or refrigerators to achieve.

While the value of this dessert was more on creativity and work of art than the taste, it still tasted really good! A perfectly good chocolate tart made in front of my eyes within 5 minutes just like that. Seeing the chocolate set on top of the pâte sucrée within minutes was like watching a time lapse video, except that this was real life. I doubt you’ll ever get to see such a show anywhere outside Alinea. 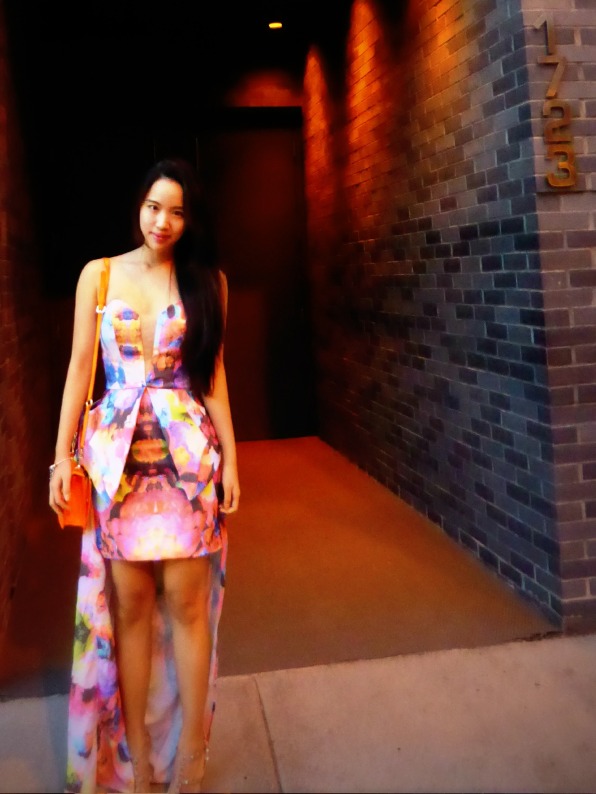 As this was probably the most outrageous restaurant, I seized the chance to wear my most outrageous outfit too. This was taken in front of their front door, which is pretty elusive. You must lookout for the “1723” door number because that’s your only clue.

Wear however weird you want (but no sloppy attire. Gentlemen are required to have proper shoes, pants and jackets.) because you won’t be weirder than their cuisine.