I’m finally back with a restaurant review! It’s been a while, I know.

I’ll admit it – I explore restaurants in Singapore a lot less than I used to a few years ago. It’s due to a combinations of factors:

However, there’s a category of restaurants that do not fall in this list – our own local cuisine. Singaporean food refers a broad spectrum of different styles which may not have anything in common, but what I’m actually referring to is Peranakan style cuisine. I’ve not been to Malaysia (except twice in childhood) so I can’t say whether they have it better there, but for sure I know we have pretty good Nyonya cuisine chefs/ home cooks here. The catch is, many good recipes are actually heirloom dishes passed down from generations before within families and we don’t actually have a lot of commercial restaurants serving good Peranakan cuisine. In fact you can easily find more Japanese restaurants than Peranakan ones in Singapore. I do not know the real reason why this is so, but I’m guessing it’s for 2 reasons :

Despite being Singaporean, I actually do not really like most local food, especially Chinese food – I do not like noodles or soup. The dishes which I appreciate are those of Peranakan/ Eurasian/ Indonesian style – the cuisines with complex flavours from their custom made rempah, sambal and gravy. I don’t have a particular favourite dish but I like the cuisine as a whole for how complex it is. But precisely because it’s not simple and I can never replicate such dishes at home, I am very interested to try new restaurants in the local dining scene! I like it even more if it’s modernised versions of classic dishes. Sorry, but I am not a traditional cooking sort of person. I am all for creativity when it comes to food, except when it comes to steak. 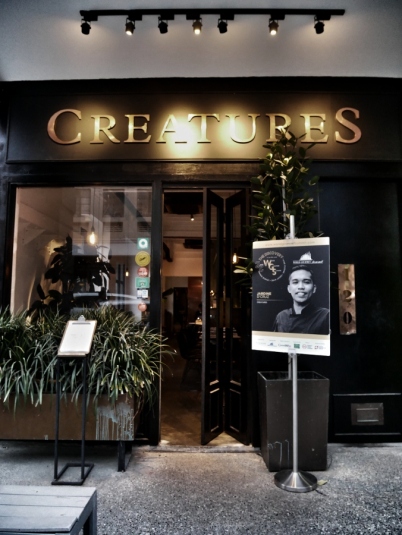 CreatureS has been around for a while but recently had more exposure because they came up with a dish of Crispy Chicken Rendang after the Masterchef saga. I would have never bothered trying chicken rendang because I believe rendang is better with beef or lamb, but since CreatureS is not a traditional cooking restaurant, I wanted to see what magic they added into this dish.

Otherwise, I probably would have put off trying this restaurant till later because the location at Desker Road is personally not the most convenient for me – it is close to Mustafa, and Swee Choon Dim Sum – somewhere between “the world famous Serangoon Road*” and Jalan Besar and I generally don’t hang out around this area. However, I think this location is GREAT for tourists. Tourists and expats loves Mustafa because it’s the most unique supermarket in Singapore. You can find anything here at cheaper than usual prices. The surroundings is also not like anywhere else in Singapore and it is something less curated to see compared to the rest of the country which is too man made.

*I actually once heard a Caucasian foreigner exclaim that he’s at the “world famous Serganoon Road” the moment he stepped out of Little India Station. Little India could actually be more iconic of Singapore than the Merlion. 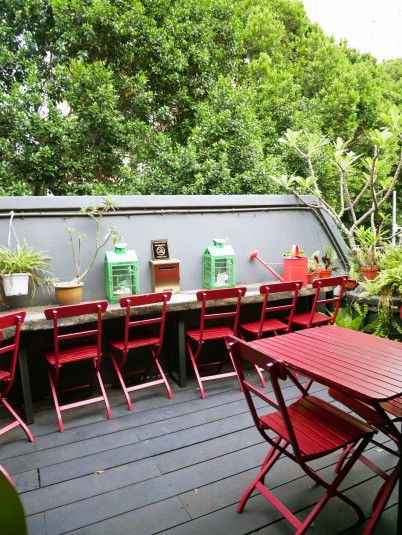 Despite being in a pretty old shop house, the interior was nicely done up (not the shabby hipster kind of style like but modern and clean looking) and the scent of lemongrass greeted us when we stepped into the restaurant. They even had a little cozy outdoor roof top area.

They seated most guests on the upper level of their restaurant by default and I greatly appreciated this because I had a bad experience at this certain lobster restaurant in Katong which seated diners on the first level, greatly compromising the privacy of customers since their staircase was at the rear end (so everyone needed to walk past if you’re seated downstairs) and the temperature difference whenever the main door opened was disturbing. Basically that restaurant should not even rent such a unit for a restaurant which is meant to be expensive. That’s another story for another day, but that experience was terrible. That aside, at least CreatureS’ staircase is near the front of the restaurants so I assume when they are full and diners do get seated downstairs, it won’t be as unpleasant as that lobster restaurant in Katong. Our dinner on the second storey was very comfortable and had adequate privacy. I was very satisfied.

I am glad that my dining companion for today believes in having appetizers and desserts and not just main courses. There were actually so many things we wanted to try, but we settled for this Ngoh Hiang & Kieh Pie Tie because they said the Ngoh Hiang was homemade by the chef’s aunt (or something along that line) and brought to the restaurant to be fried. Ngoh Hiang and Kueh Pie Tie can be commonly found in Singapore but majority of those I’ve tried were not good. This Ngoh Hiang indeed did not disappoint but a part of me still think my grandmother’s was better – but that’s what everybody thinks of their own family’s version isn’t it? Compared to commercial versions I’d say it’s way better than most others. The filling was not too compact (like if they put too much flour it will be tightly bound like a tough meatball) and had lots of crunch. The frying was also on point making the skin thinly crispy.

The Kueh Pie Tie was alright but I think I could get slightly better ones from other Peranakan restaurants like Violet Oon or Candlenut. I think Indocafe still serves my favourite Kueh Pie Tie in my memory. (However this is still much better than hawker stalls for sure, that’s out of the comparison I’m making).

I wouldn’t mind having this dish again but if I came back again I would choose a different appetizer to share because I love novelty! 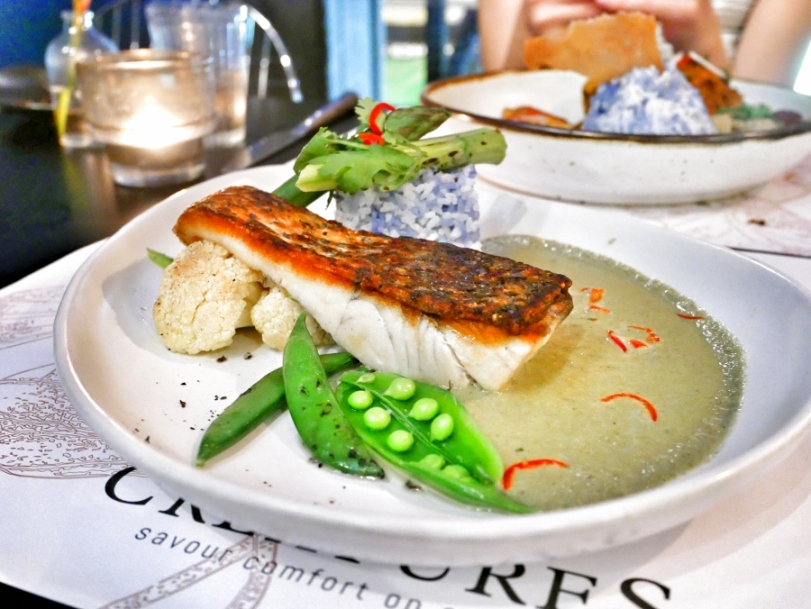 When it comes to pan seared barramundi, I think The Naked Finn‘s is hard to beat. However, the point of this dish is the combination of everything and not the fish alone. The green curry is not of the watery consistency like it would be at Thai restaurants. It’s more like a thicker sauce with concentrated flavour. The flavour is like having Thai green curry but better. I love it! I am a fan of green curry to begin with, but if you’re adverse towards green curry then this whole flavour may not be your thing. 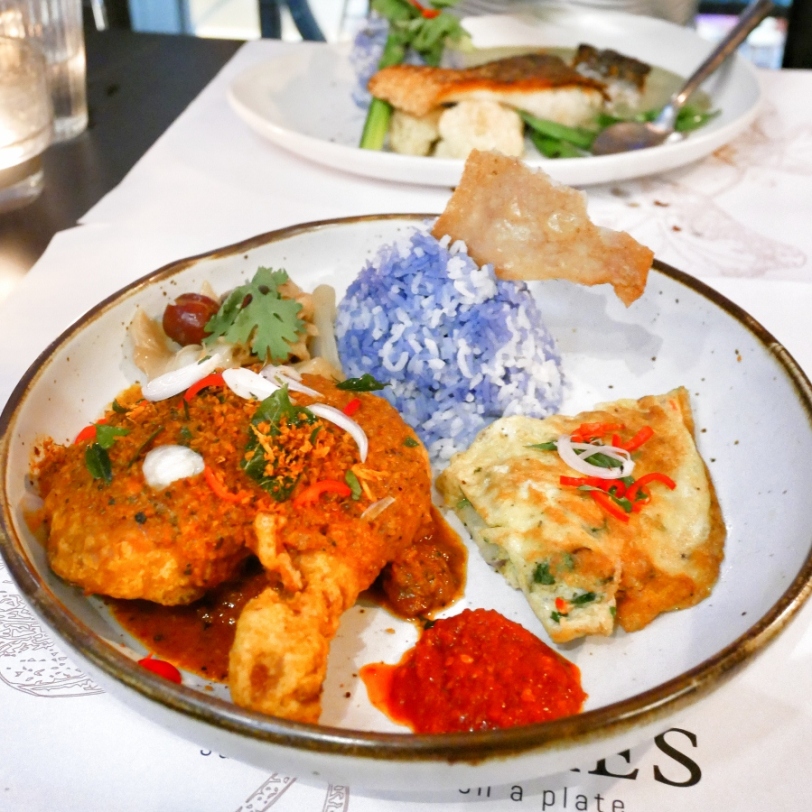 This is the star of the show – the Crispy Chicken Rendang. I have to be frank – it wasn’t really crispy when by the time I got to eat after I was done with photos, which took a good 5 – 10 minutes. Crispy or not, it did not matter because the beauty in rendang was never about having crispy texture. It’s all about that flavour. The spices. The fragrance. This had it all. I love it! It’s actually nothing like the flavour from my usual beef rendang and for a moment I forgot that I was supposed to be eating rendang. It’s actually something entirely different and I have no idea what secret spices they used, but it had a mild Indian spice note to me, like cumin or something.

Whatever it was, it’s really unique and my eyes literally lit up upon tasting it. I love complex flavours and there was just so much going on in the rendang gravy. The chicken itself was also very moist and well marinated. I generally do not like the flavour of chicken meat itself – plain and overcooked dry chickens are the worst and for that reason I hardly ever order chicken main courses at restaurants. But this is one is nothing of that sort and I savoured every last bit of the chicken rendang. The side dishes were very home-style and nothing pretentious at all – which compliments this dish perfectly. To top if off, the blue rice is beautiful even though I didn’t like that crispy thing they stuck on it.

I am sold and will definitely come back again to try other dishes.

It must be an age thing because in my childhood I get grossed out but the flavour and texture of Yam. It would just make me cringe. But in recent years, I did not just accept it, but grew to really love it. I actually think it makes a flavour for western sweets like cakes and ice cream! Not every Asian ingredient can pull that off, but Yam is a rare one.

While the flavour of the orh nee was pretty good, it wasn’t the best Orh Nee cake I’ve tried so far. I personally prefer Bloomsburry Baker‘s version (even though it’s not really the same kind of cake).

I would prefer if they dessert items which isn’t cakes on their dessert menu because cakes to me is an afternoon thing to have with tea and not the kind of sweets I’d have after a meal – I’d rather have cendol or something, so a proper dessert menu is the only thing I find lacking about this restaurant.