Many Singaporeans only travel to Indonesia for Batam, Bintan or Bali. Some would go to Jarkata for Medan for visitation purposes, but actually Indonesia is more than just those few places we commonly hear about. I had the privilege to tag onto an all expense paid trip Yogyakarta and honestly, I didn’t know what to expect initially. The trip was planned out nicely by a tour agency and it turned out pretty good.

I got there via Silkair. Do not expect the same standard as Singapore Airlines even though Silkair is their regional wing. The plane was a A320, which was the same narrow body small aircraft as Tigerair. I was on the flight to Solo because the Silkair route to Yogyakarta has not commenced operations. Solo city is a neighboring city in Central JAva and it takes about 2 – 2.5h on the road (based on Indonesian traffic speed which is slow because there are no expressways) to get to Yogyakarta. Do note that getting around Indonesia is usually slow because the place is big and the pace of life there is simply slow like that. 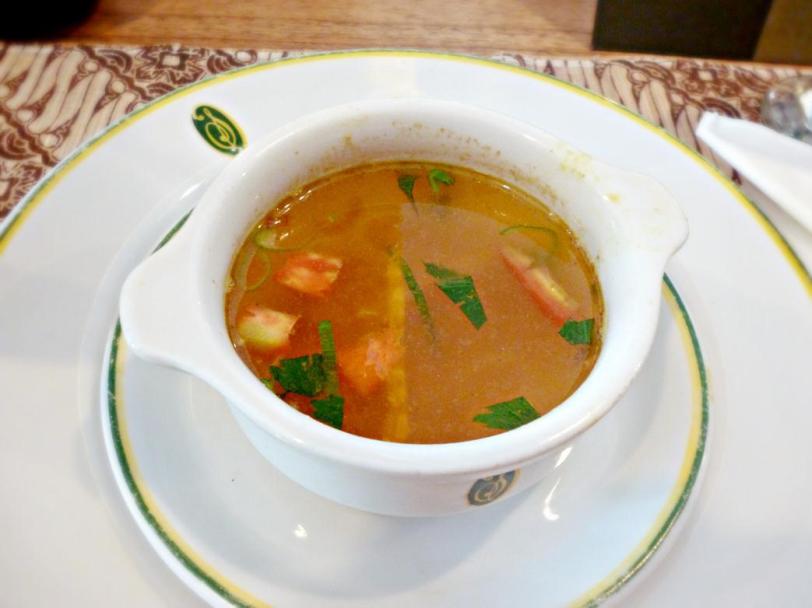 Lunch was a traditional Indonesian fare at Solo City.

It was my first meal of the trip and the Soto Ayam tasted especially good. The homemade drink was refreshing

What I loved even more was the crackers with sambal chilli. Among the different versions of sambal chillis I’ve tried throughout this trip, this was the best and most memorable. I could spread it generously onto a cracker, like kaya on bread, and eat it like that. It was sublime.

The other cooked dishes were below average in my opinion.

After lunch was a 2h journey to the hotel in Yogyakarta. 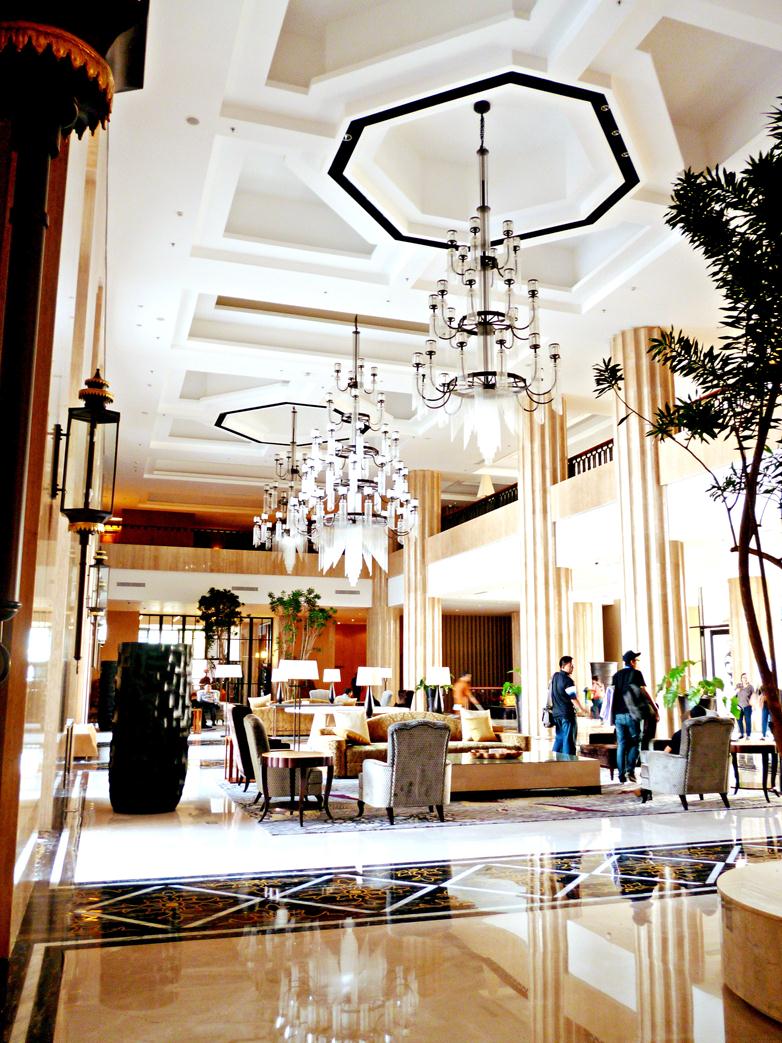 The hotel I put up at was Hotel Tentrem, which I found pretty good except for certain areas. Facilities wise it was good – the hotel gym was big, clean and well facilitated. The room service was reasonably priced and has a decent vartiety. The rooms were big and spacious with reasonably comfortable beds and the hotel was equipped with Wi-Fi, though weak at certain areas.

This hotel is ranked #2 for hotels in Yogyakarta on Trip Advisor. 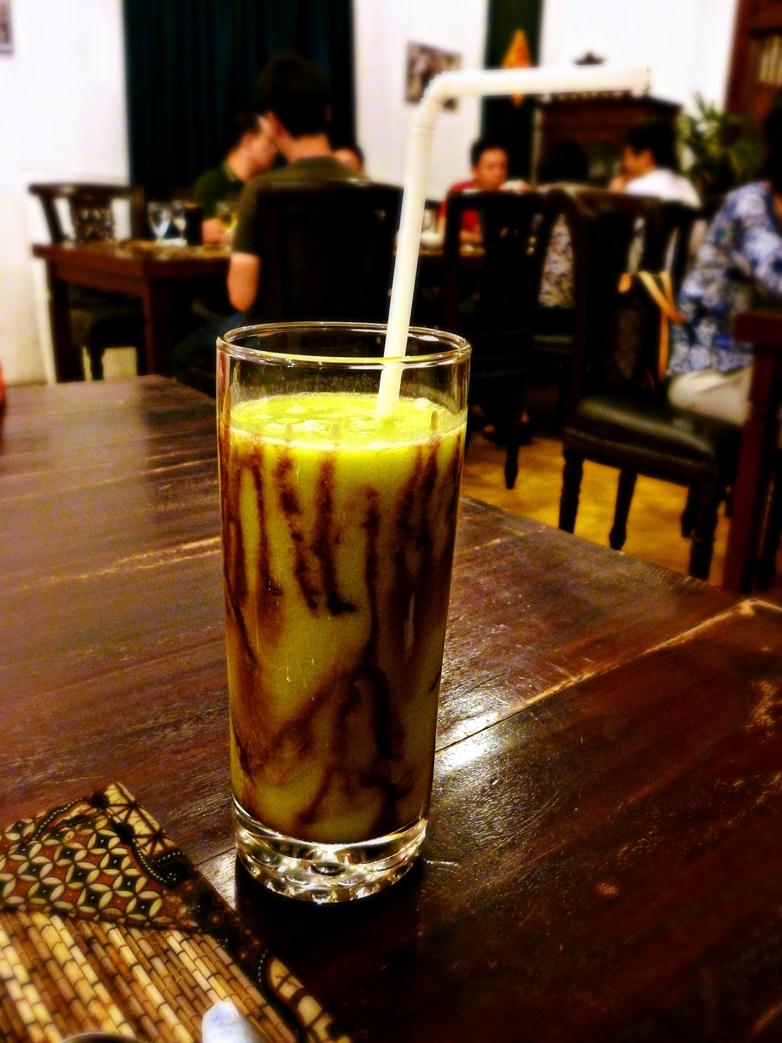 Dinner for the night was Royal Javanese Cuisine at Sekar Kedhaton Restaurant. Avocado juice is my must have in Indonesia, though I admit not everyone does it equally well. The food here was pretty bench mark, with the sambal fish and beef satay standing out more. I do not know how to appreciate their dessert unfortunately. In fact, all desserts I’ve had in this trip was overly sweet.

The following morning I got up at 3am to prepare for the Borobudur sunrise tour. Borobudur is a 9th-century Mahayana Buddhist Temple and probably the most popular tourist attraction of the region.

Borobudur is located about 45 minutes away from the hotel, and the sunrise starts around 5:30am. The temple is not open to public before 8am unless you purchase entrance tickets for the Borobudur Sunrise Tour by Manohara Hotel (a hotel right next to Borobudur) for IDR 380000 per person (~$42).

The temple is about 6 levels high and the only way up is to climb. As with most other religious sites, wearing the provided sarong is compulsory. 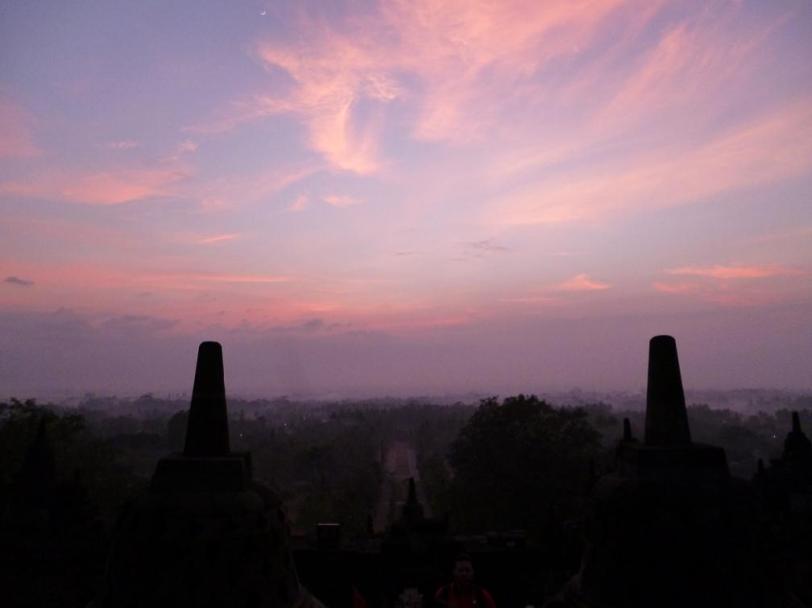 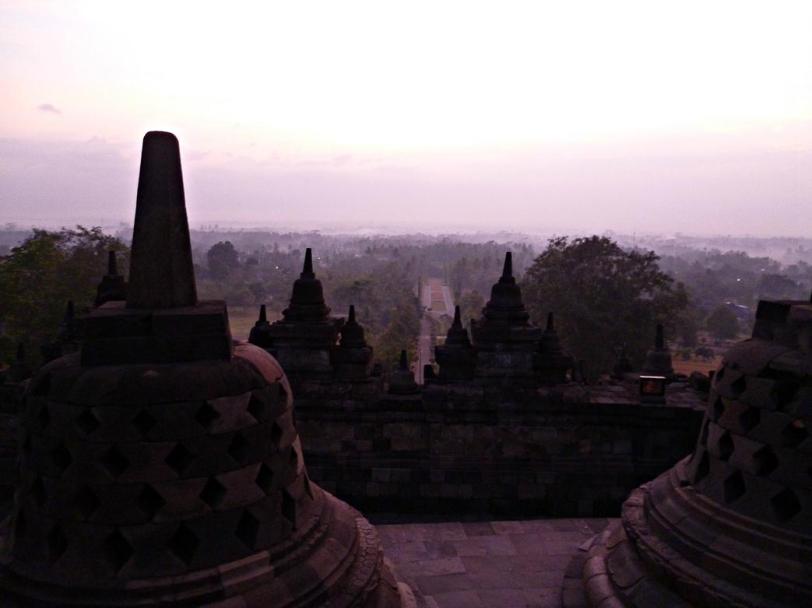 Unfortunately, it was cloudy that day and the sunrise was blocked by clouds.

The attraction isn’t as a temple per se (like to go in and pray) but as a magnificent structure. The site is preserved by UNESCO and it has been through several natural disasters. Some areas were broken and restored and some were just left broken.

On every wall there are carvings of pictures to illustrate the life story of Buddha. You would understand better if you have a guide to explain the meaning behind everything. 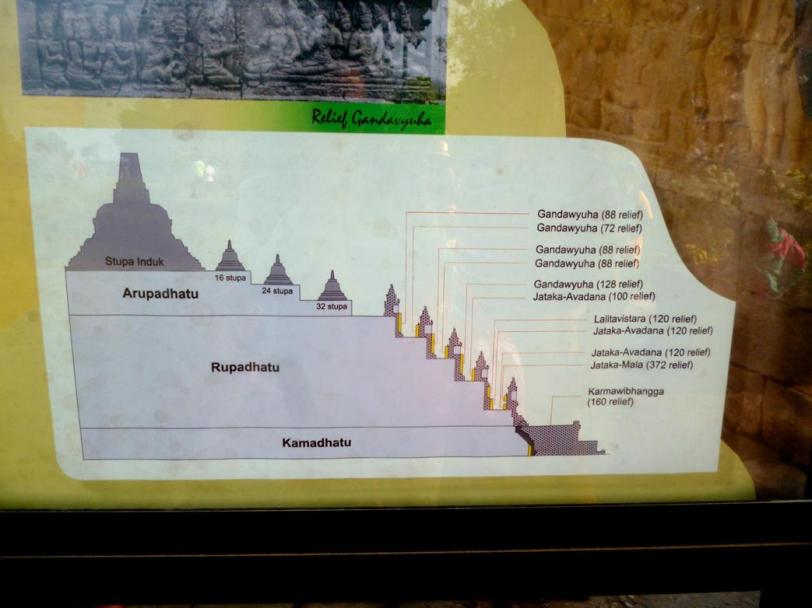 The “side profile” of Borobudur.

The bird’s eye view of Borobudur. The dome shaped structure is made of of six square platforms topped by three circular platforms, and is decorated with 2,672 relief panels and 504 Buddha statues.

It was quite impressive how all these could be created during ancient times.

As the day started early, it was not even 8am by the time I was done with Borobudur.

The next attraction of the day was MesaStila Coffee Plantation, located 2.5h away from Borobudur. The plantation is part of MesaStila resort  in Central Java.

A coffee bean on coffee tree. This is robusta. They have 4 sorts of coffee varieties here but 90% of their produce is robusta.

They have Arabica coffee too.

Even though this is mainly a coffee plantation, the plantation has all sorts of other plants too. Cotton is one of them.

I was wondering who threw cotton wool all over the floor. And then I was told they had cotton plants there.

I learnt about the process of making coffee beans from scratch.

Fresh coffee beans are being picked from the plants when ready and is then put into the machine to have the skin removed. 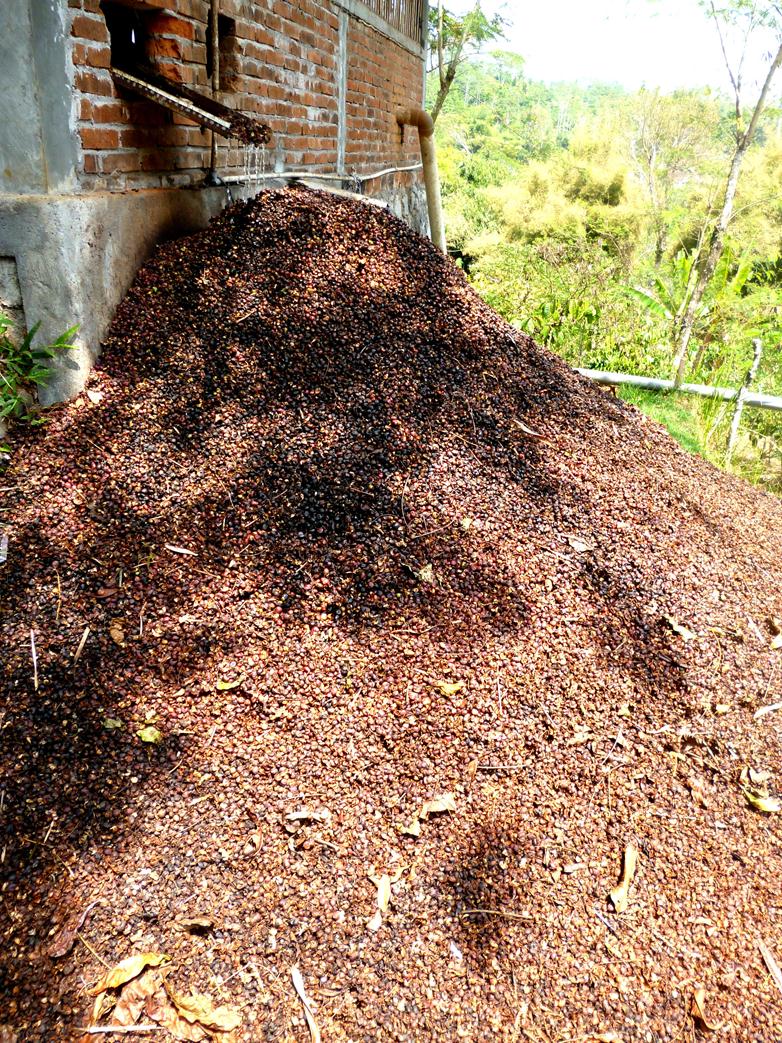 Discarded matter from the machine.

This is the raw dried beans before roasting occurs.

The coffee is roasted in barrel. Bamboo and wood are used to create the fire. 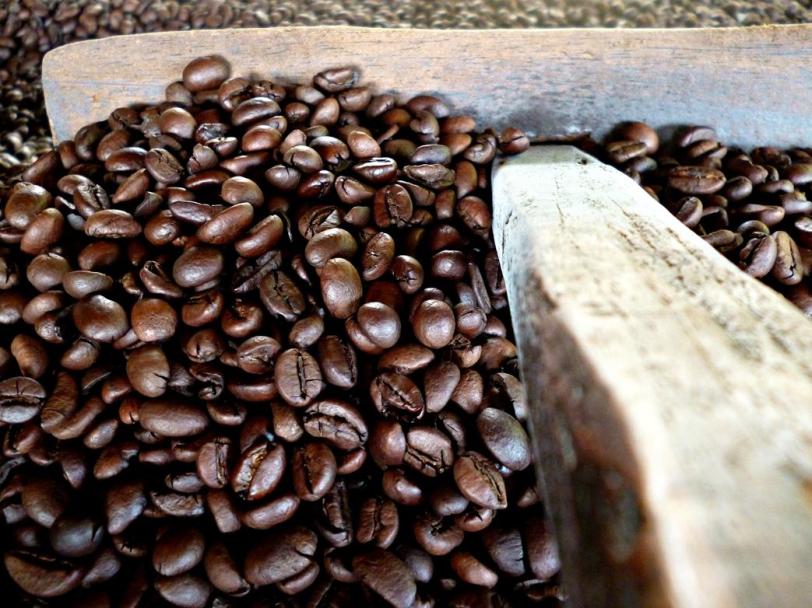 Now that looks more familiar doesn’t it? Those are the roasted beans ready to be made into coffee.

In Java they make coffee by grinding the beans into powder (I think). The beans can be eaten like that too – it’s crispy and smokey in flavour. Palm sugar is provided for those who likes it sweet. 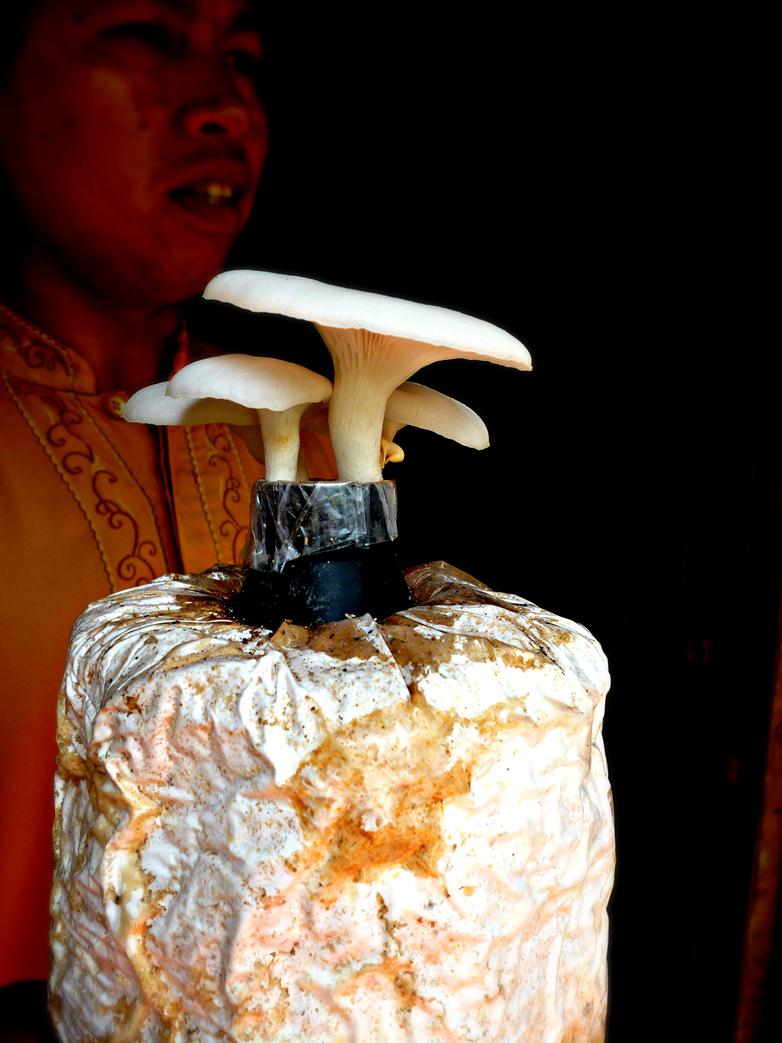 They grow mushrooms too in a dark little hut.

And lots of familiar looking vegetables like bak choy. Everything in this plantation is grown organically.

One seed probably had a gene defect which makes that bunch of lettuce different from the rest! 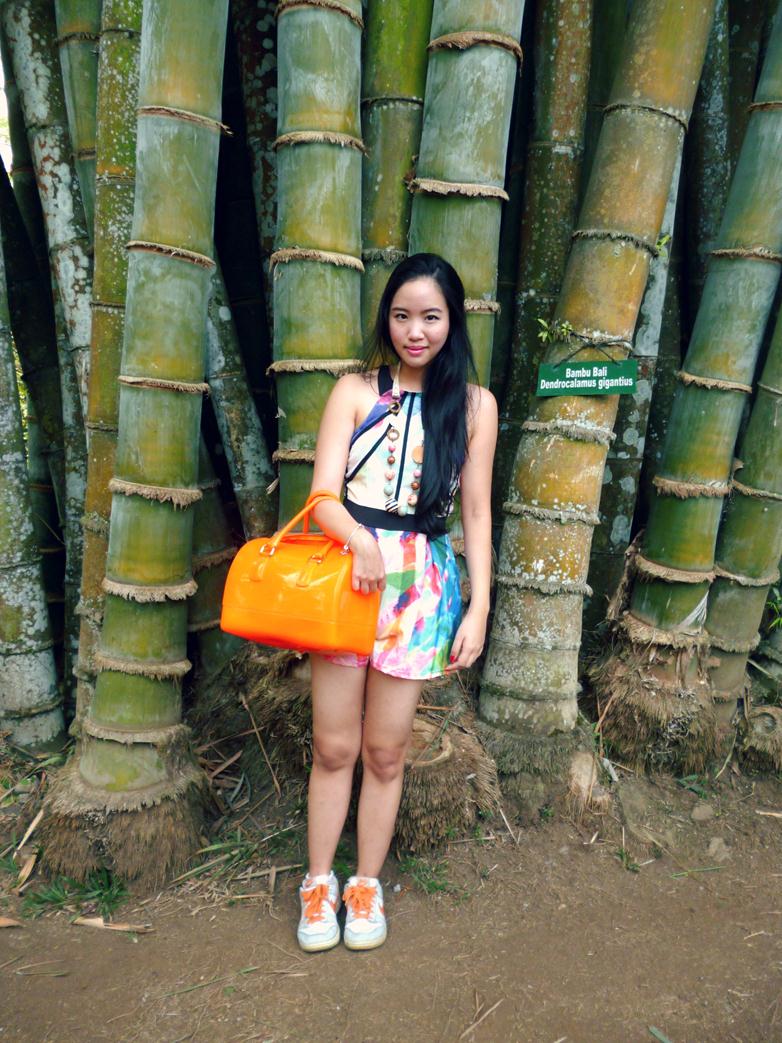 They have huge bamboo trees too, different from the sort I saw in Arashiyama, Kyoto.

It didn’t move so I went closer.

Chameleon poses for the camera!

I had lunch at the restaurant at Mesa Stila plantation. The food here is healthy and organic – just the way I like it. I think this is my favourite meal of the trip! 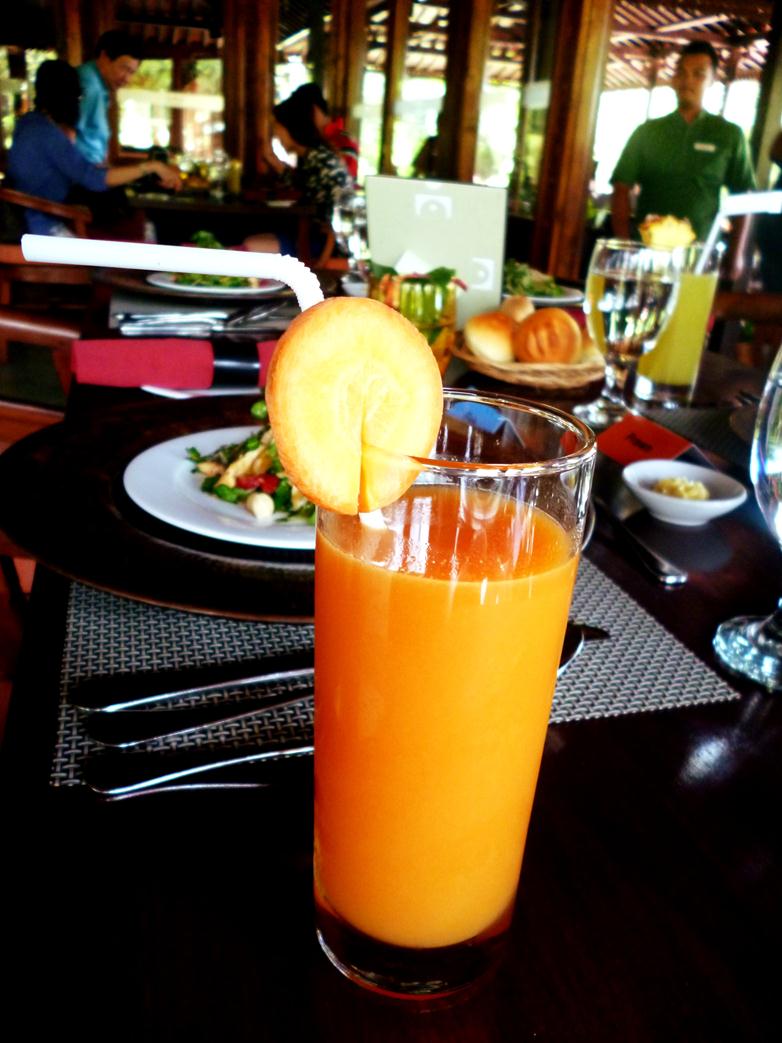 The mini baguette was surprisingly nice. Not many pastries were good in this trip. 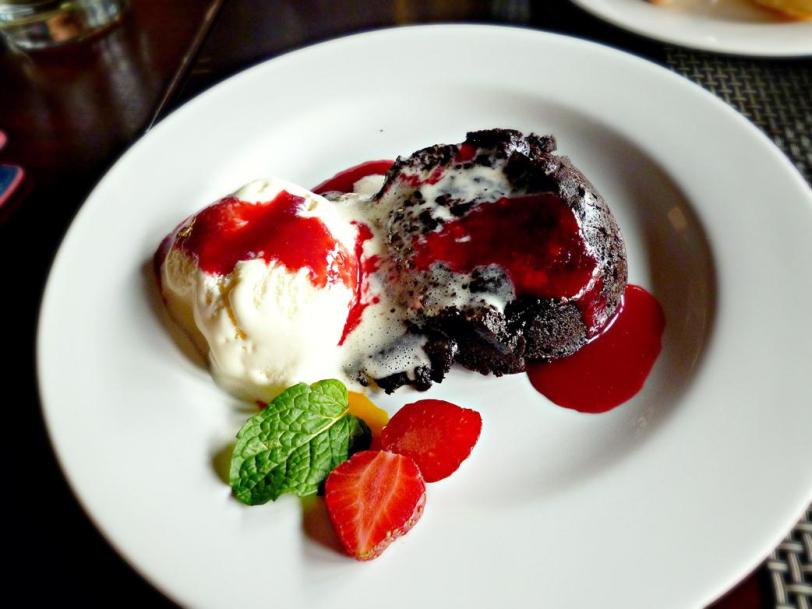 I am not sure how much it would cost to stay in MesaStila resort (it would be quite a luxury) but do at least pay the plantation and restaurant a visit! I really enjoyed this.

The rest of the afternoon was free & easy and I decided to check out the hotel’s gym and Jacuzzi. The hotel’s gym was new, big and well equipped. Do bring along your exercise gear should you stay in this hotel, because the gym was worth checking out. The variety of equipment were like any paid gyms in Singapore, and not poorly facilitated like condominium gyms.

I also checked out the hotel’s executive lounge which has food and drinks for guests between 5pm – 7pm.

For dinner, I ordered room service of grilled scallops and prawns. It was charcoal grilled and tasty. 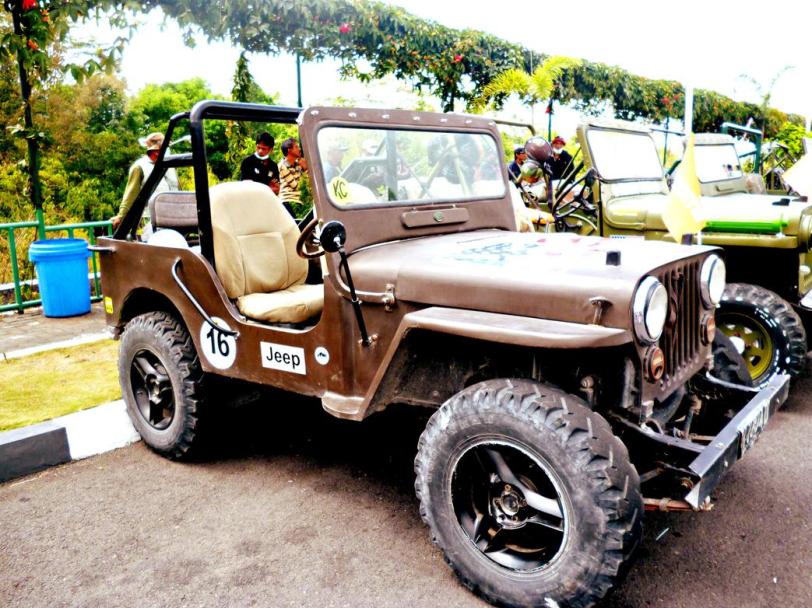 The next morning’s activity was to go up Mount Merapi in a Jeep for the Lava Tour. There are many volcanoes in Indonesia and Mount Merapi is a prominent one. The last big eruption was in 2010. Major eruptions happens once every 100 years while minor ones happens every 3 – 4 years. It is considered to the most active volcano in Indonesia.

If you are interested in such tours there are several agencies running it and is quite easy to find online. 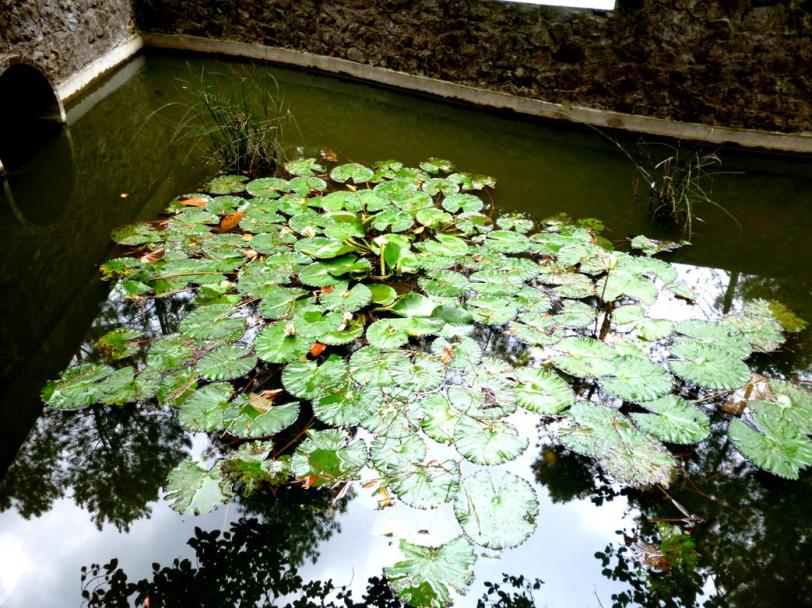 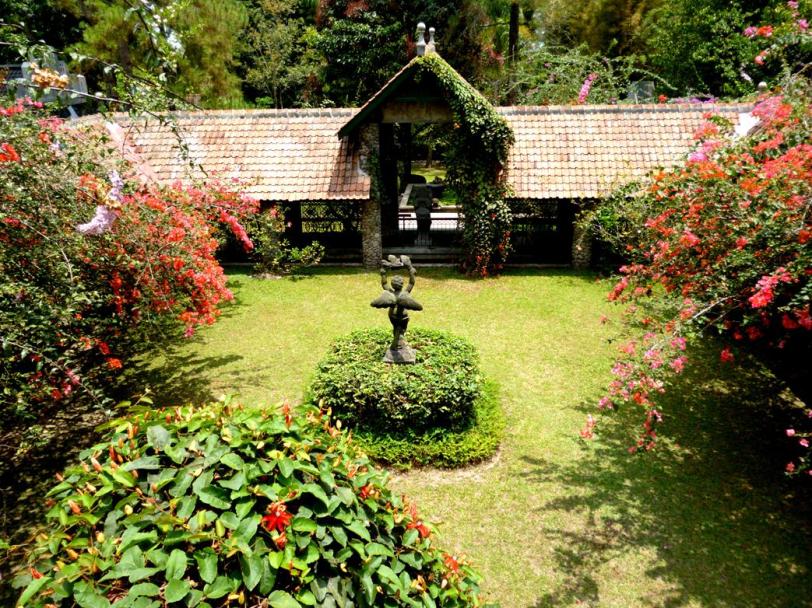 Lunch was at Beukenhof Restaurant which was pretty near Mount Merapi. The building the restaurant was located at was simply beautiful and colonial style. It looks like Raffles Hotel situated in the Botanical Gardens. 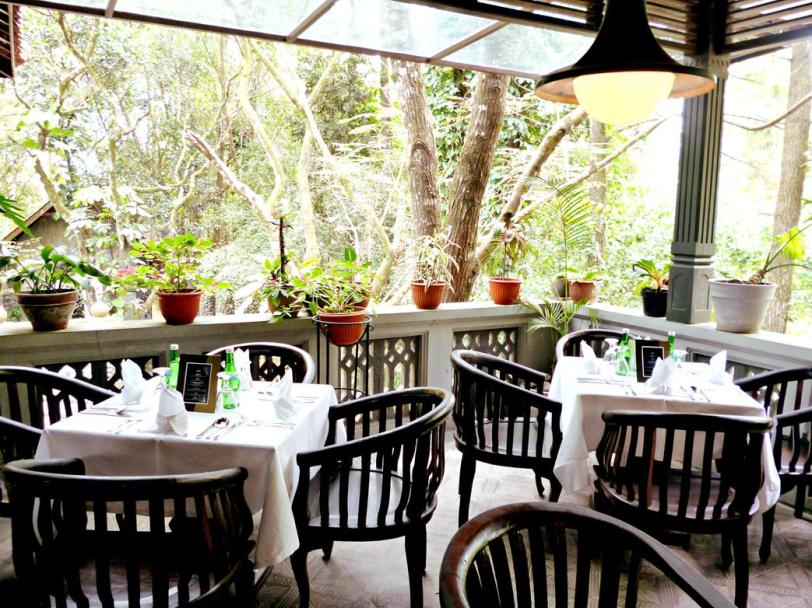 The patio seats has more “feel”.

The food was forgettable and nothing to shout about or even speak about. The ambiance however, was perfect.

The other famous UNESCO heritage site in the region aside form Borobudur is the Prambanan temple. This is a 9th Century Hindu Temple. It is located relatively near Borobudur, and this signifies that different religions can coexist harmoniously in Java. 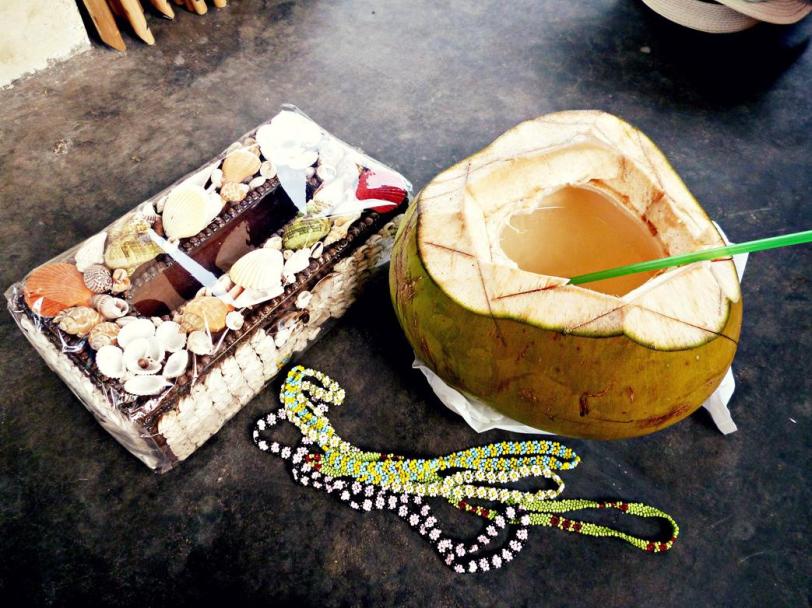 There is a street market located near Prambanan where you can find handicraft and souvenirs. Of course, you have to bargain. Small souvenirs can be very cheap, as low as IDR 1000 ($0.11) and you can find batik shirts for IDR 25.000 ($3).

Be bold at bargaining. I felt I could have done better than that.

The tour arranged for horse carriages to take us to the restaurant for dinner. The experience was a good one.

Lovely sunset and scenery greeted me along the way.

The restaurant for dinner had a perfect view of the Prambanan temple.

The food there was below average. 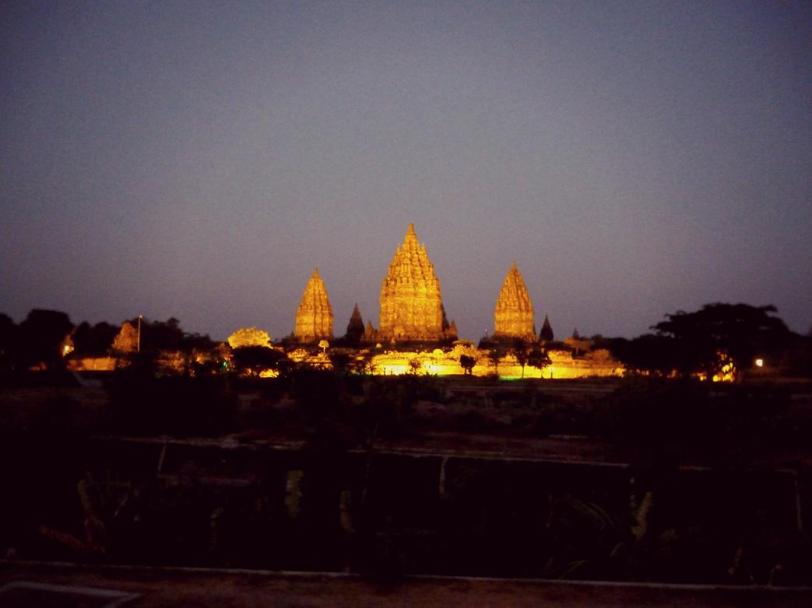 The view was even better at night when they turn on the spot lights.

The next morning was free & easy and I made a trip to Plaza Ambarukmowhich is considered the best mall in Yogyakarta. The department store Centro is comparable to Metro or BHG in Singapore – it has international cosmetic brands and relatively fashionable items (compared to Matahari). You can find Ralph Lauren here and a polo tee can be around $40. Do not be confused by the POLO shop, which is actually an Indonesia brand which has no affiliation with Ralph Lauren but with strikingly similar designs (also known as imitation). Prices at POLO is only slightly cheaper than Ralph Lauren which is a rip off because most local Indonesian brands are inexpensive. 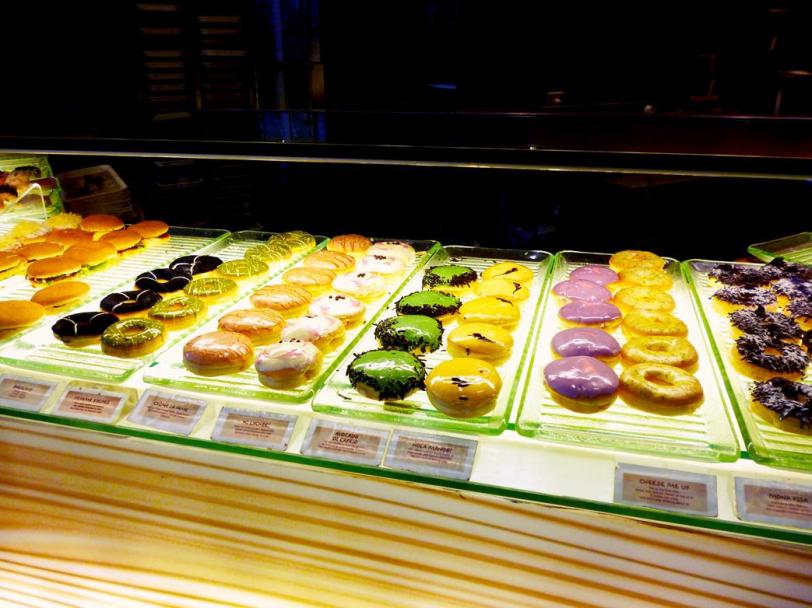 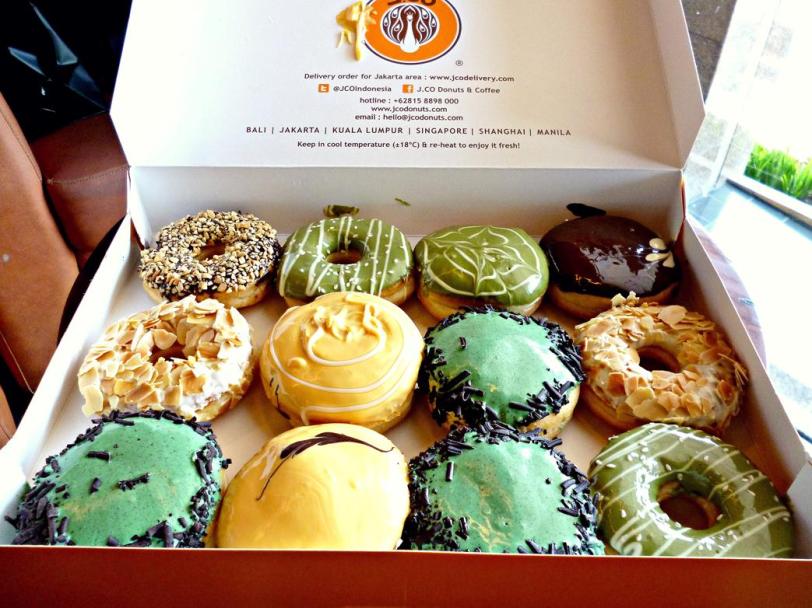 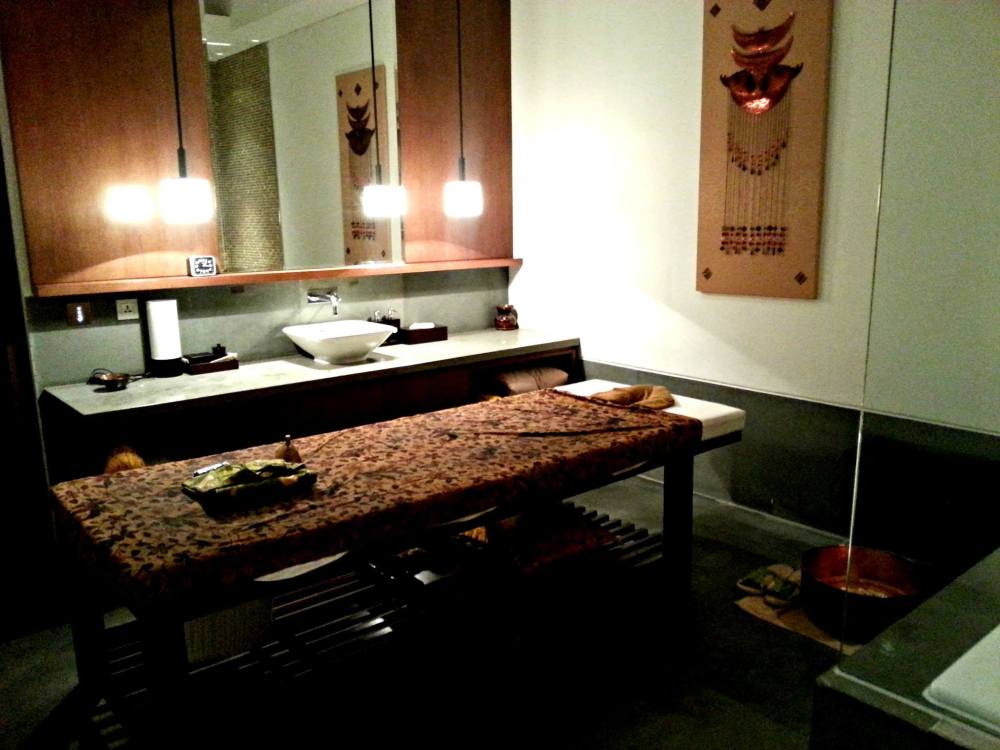 I spent the rest of the early afternoon at Hotel Tentrem’s Gaharu spa doing a 2h Javanese Massage. I managed to get 20% off which makes it $39 for 2hr. It is more expensive than the massage around the town but as this is a hotel spa I found the price reasonable. Moreover, it was convenient for me.

The last dinner of the trip was at a hilltop restaurant. Sunset is rather early so being there by 5pm is a good idea. The restaurant is part of a boutique resort. The road up was narrow and requires good driving skills. 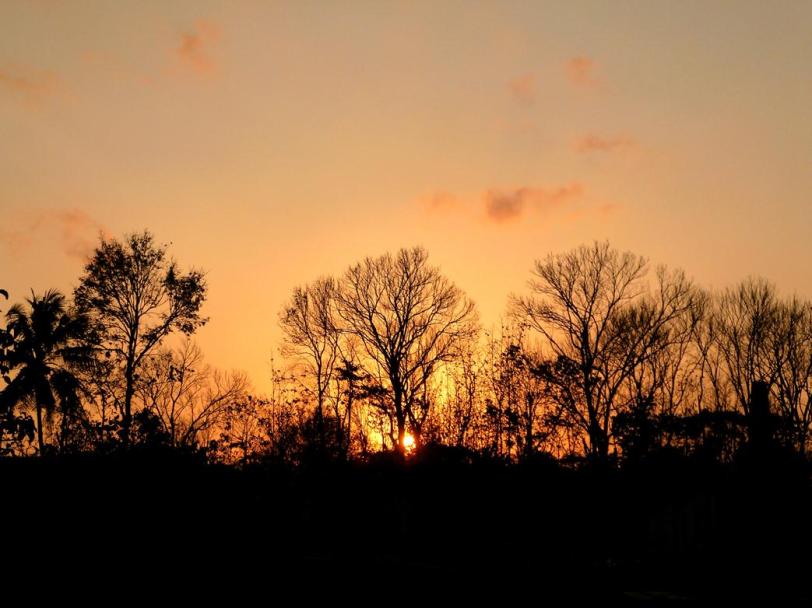 Spot Prambanan temple in background. The panoramic view was beautiful.

The tour organizer arranged for wine, canapes, performances and live music for the night. 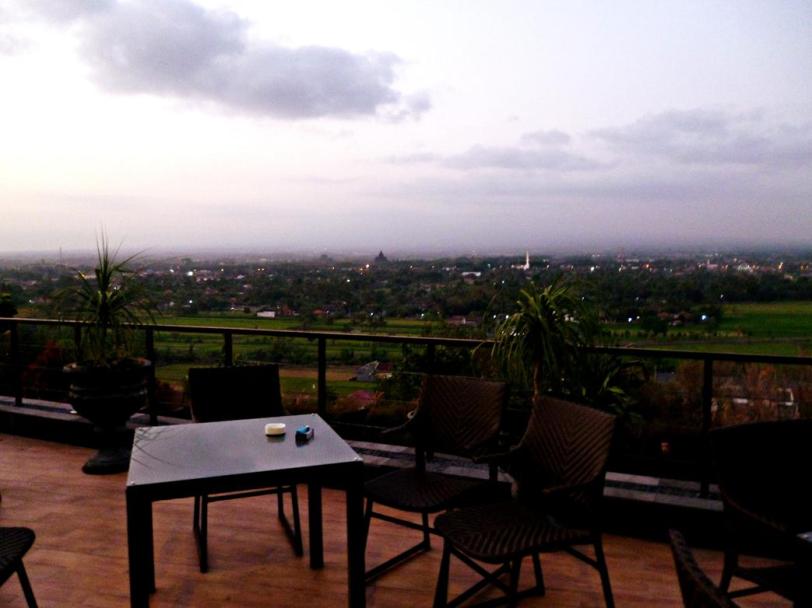 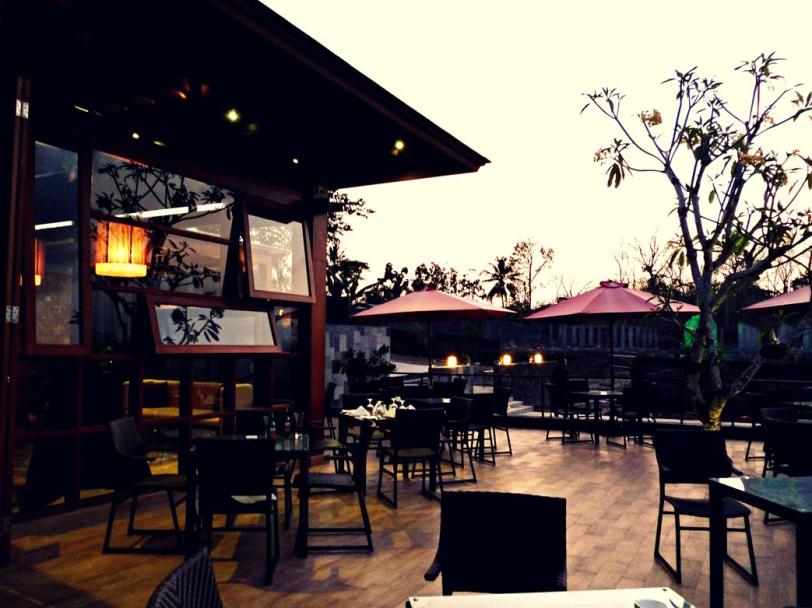 The live band the organizer arranged for was good too. I didn’t get their name but it was a local band.

The food here was not bad and I would recommend this restaurant for the stunning view and ambiance and reasonable tasting food. I would definitely recommend this place and do come when there’s still daylight because you don’t want to miss the panoramic view.

The final day was spent getting home as the flight was rather early, so this marks the end of my Yogyakarta adventure. The place wasn’t as poorly facilitated as I thought it would be, and I love how lowly priced everything was. Through my tour guide, we managed to order Kueh Lapis from a home made supplier for only IDR 80.000 ($8.80).