I like to try molecular gastronomy restaurants in various cities around the world because they’ll source local ingredients and create something new with it. It is a good way to experience a little of everything I feel and also to be entertained with the chef’s creations. I only knew about Namaaz when looking for restaurants in Jakarta. It is rated one of the top so of course I had to try!

Located at the edge of South Jakarta, this place is quite accessible even during peak hours because the roads leading here can be away from the usual roads with heavy traffic. From Kemang it took less than 20 minutes to get here and I was so glad it took a short time because the dinner was going to be long.

The menu is a fixed 17 course and changes every “season”. Their seasons lasts 6 – 8 months and then it’ll be changed. The menu costs 1,250,000 rupiahs per person which is around S$130. You definitely won’t find a 17 course meal for $130 including tax in Singapore, for sure. They are only open for dinner from Tuesday – Saturday and they would ask for a bank transfer beforehand to secure your table. This is somewhat like Alinea in Chicago and some restaurants in Spain where they sell “tickets” to dine. They have no online payment system and I definitely have no Indonesian bank account, so I explained that I’m a foreigner and they allowed me to pay in person when I dined there. 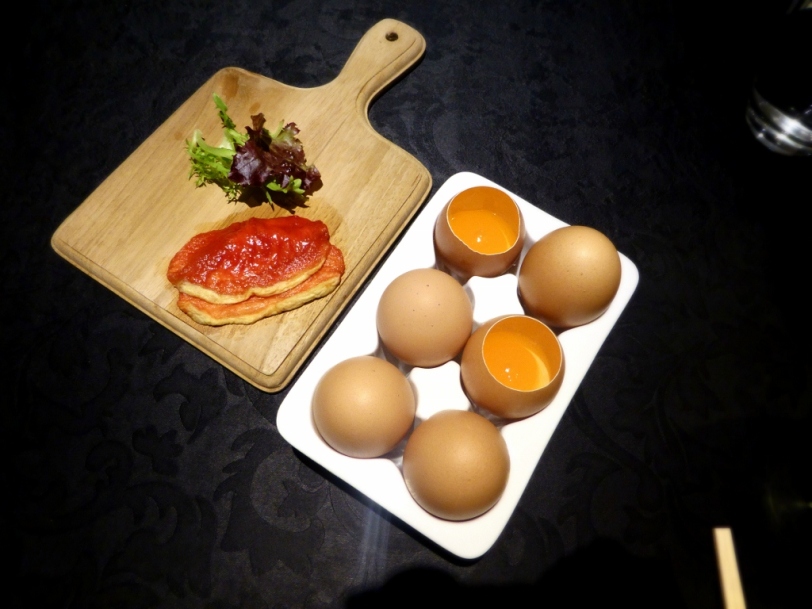 This is actually passion fruit bubble and watermelon.

Looks like a sheet of foolscap paper, a pencil and a sharpener with pencil dust. 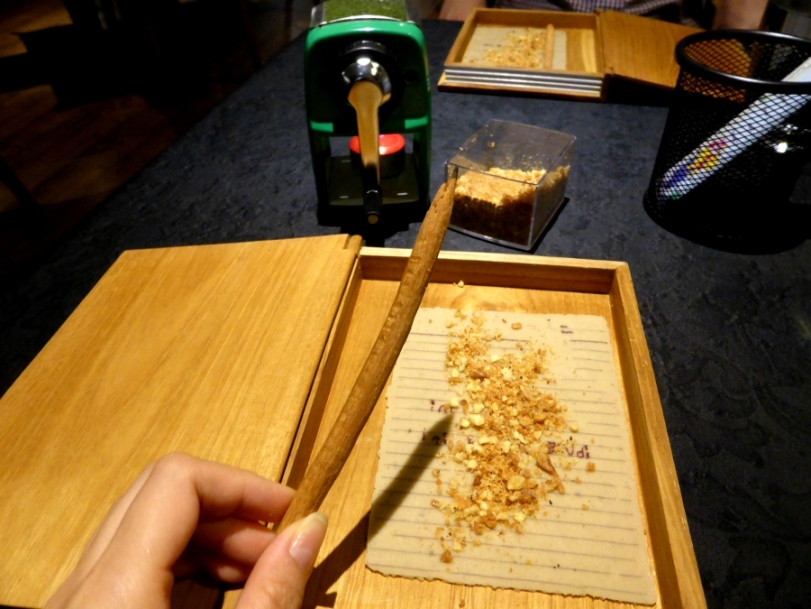 Pencil, paper and dust is all edible! The most inedible looking thing is that pencil for sure. There’s a dip for it on top of the sharpener. Basically this is supposed to be opor ayam which is a chicken dish in Indonesia. They made chicken look like a pencil.

This is supposed to taste like dabu-dabu, an Indonesian spicy condiment commonly found in North Sulawesi.

This is supposed to taste like pempek kapal selam, an Indonesian fish cake dish which I am again, unfamiliar with. 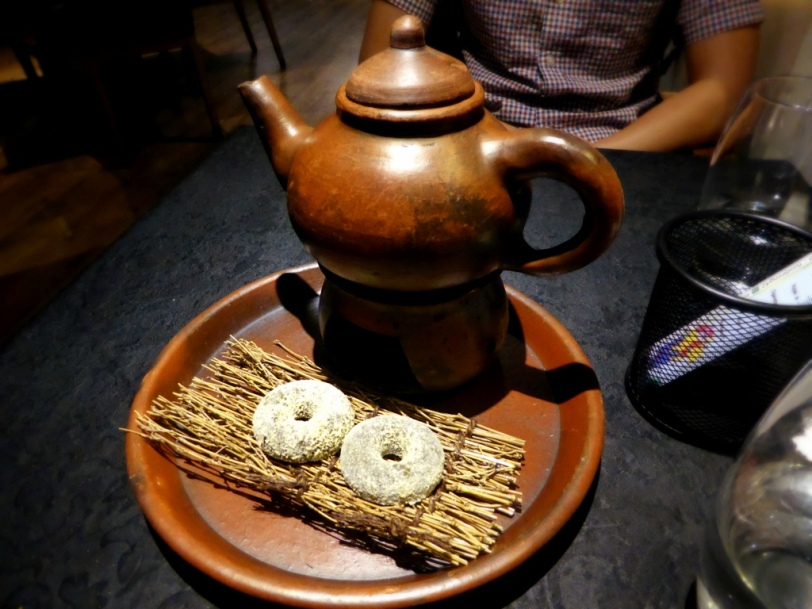 Looks like two sugar donuts and a teapot. The donuts was placed into the teapot and it actually dissolves to form a soup broth! It was gradually heated up with the flame below and left on our table to simmer.

Looks like a snail and spoon but this is squid with an edible spoon. 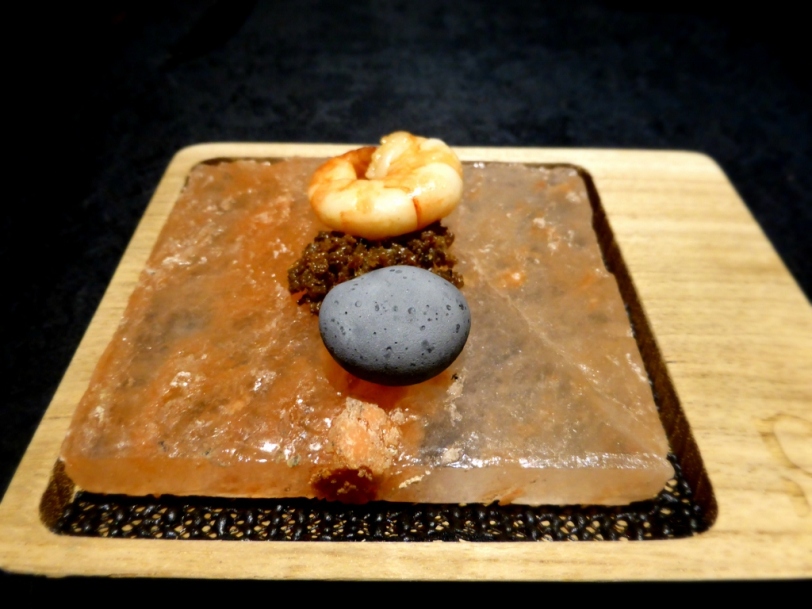 Looks like an innocent rock but that is not. It’s edible! It’s a baby potato. It’s served on a slab of Himalayan pink rock salt and we gently rub the prawn onto it for subtle flavour. It’s good stuff.

The inspiration for this dish is a famous Indonesian saying called “Ada Udang di Balik Batu” – meaning a shrimp behind a stone, and they designed this dish to fit the description of that saying literally.

Looks like a chunk of dry ice but everything is edible. It’s not a dessert, it’s Rujak – something like rojak in Singapore. Imagine the peanut sauce and fruits.

Looks like a cigarette but it’s actually not. The ‘smoke’ is from liquid nitrogen once again. In Indonesia, they have a snack for children called “Permen Rokok” which looks like cigarettes. This is Namaaz’s version of it.

Second part of this dish was looks like cigarette butts and ash in an ashtray. Totally.

This was actually all sweet.

It looks like charcoal but of course it isn’t just a plate of coal. It’s some vegetable and lamb under all that black coating. The piece of newspaper was from today’s paper, printed on candy.

Charcoal seems to be a hot favourite experiment for molecular restaurants, having seen this in Alinea (Chicago), Narisawa (Tokyo) and Gaggan (Bangkok). 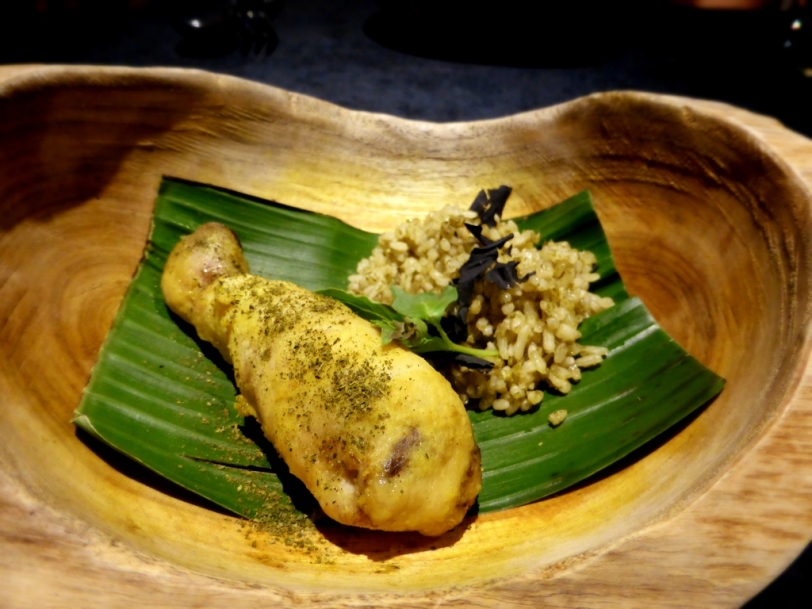 Looks like chicken, but is actually fish wrapped around a chicken bone.

Beef with powdered rendang spices. Finally a dish which looks like what it actually is, only that there’s no gravy. Rendang without gravy? Really??? It actually is possible and it tasted like rendang.

So glad this is the last savoury course!

Palate cleansing dessert was some sorbet and a fruit, which I am unfamiliar with. 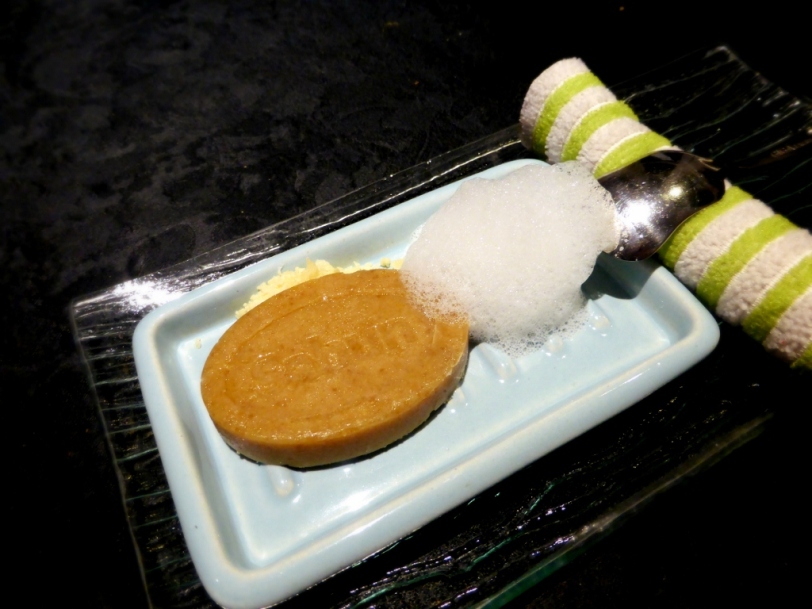 It really looks like soap. The towel is not edible of course. I like how it says ‘Sabun’ on the soap. It was some caramel tasting dessert which I thought I’ll only have a bite but ended up eating the whole thing. I love rich and heavy desserts. The flavour and colour of the soup would change each season! 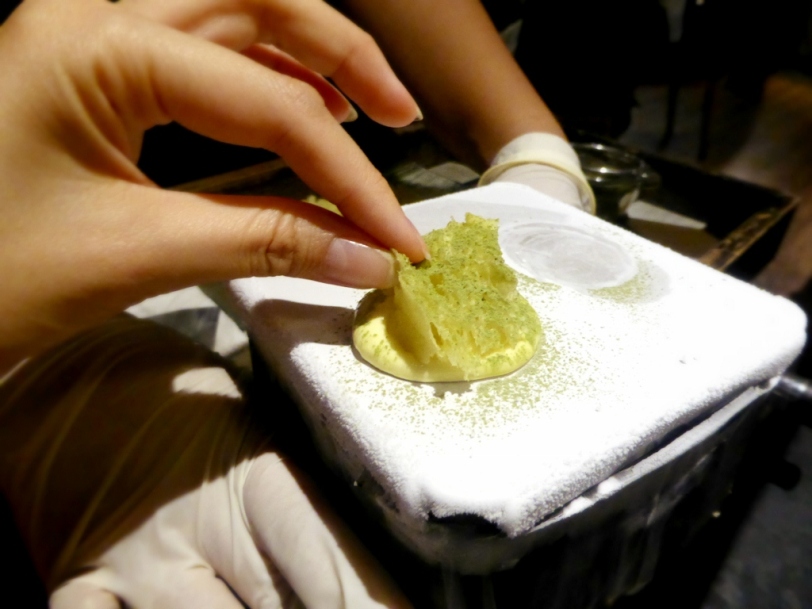 They call this boob cake, I don’t know why. A foam like thing from an aerosol can was sprayed onto the cold plate and it firmed up into a cake, like Indonesian kue cubit.

This hot and cold tea was similar to something I had at Fat Duck! It was a confusing sip.

Preparing for the upcoming mess with ponchos. The last dessert was a blast, literally.

Bits and pieces blasting all over. They just had to end the meal in an explosive way. 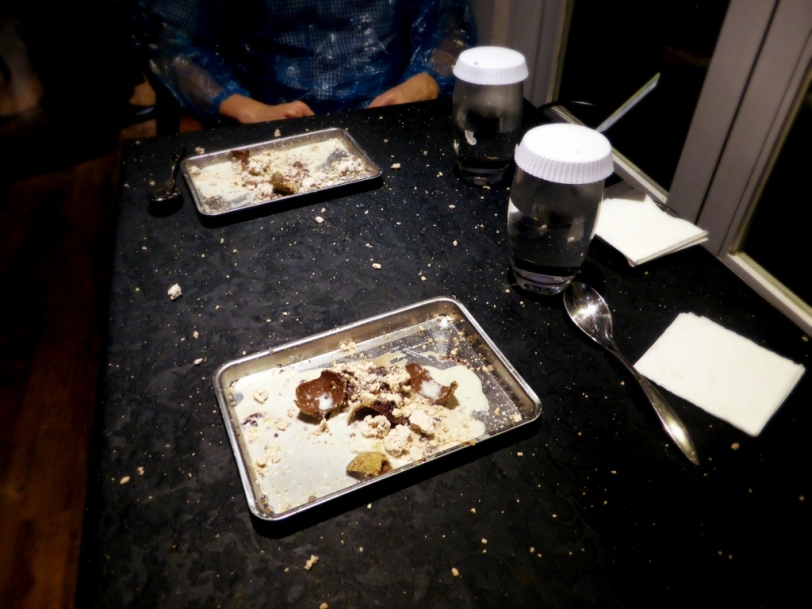 The aftermath was very messy, kind of too messy for comfort and pleasure. This reminds me of Alinea where they served the last dish in a bombastic way, only that it’s way messier here. Perhaps they could do something impressionable sans the mess and it’ll be better for everyone.

The style of this restaurant is to make the food look like that it isn’t. I mean, all molecular restaurants aim at doing that, but for this place, they really have to make say, fish look like chicken. It really seems like this is their priority and sometimes perhaps the taste is compromised because too much is focused on aesthetics. This extent is kind of overwhelming for me, but diners here are coming for the experience ultimately. Just try once.

Also, it will really help if you are familiar with Indonesian cuisine to begin with. It’ll be more relevant if these creations tasted like something from your childhood. At least there’s a reference you could compare with. For me, most things tastes new since I’m very new to (but started to love!) Indonesian food. Still, I really like how I could learn about various traditional dishes through this innovative meal.